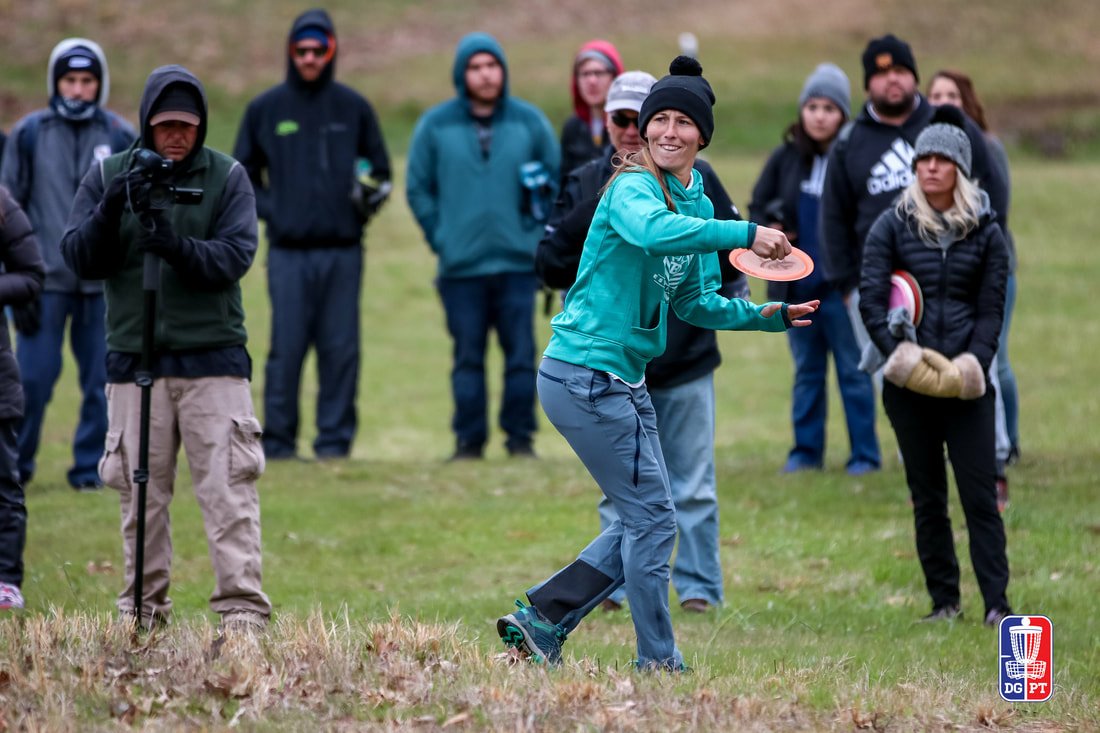 ​Now that is the kind of first round I like to see! Of our thirty player field, half of them finished even to par or better, and par is tentatively being rated at 930, well over many of the player’s ratings. Currently, Paige Pierce and Catrina Allen are giving me deja vu with their tie for first at six under par. When I spoke with Paige Pierce earlier this week for our Mind of a Champion spotlight, she predicted that she and Henna were going to battle this weekend. That foreshadowing could not be more accurate. Both players were selected to play on today’s feature card along with Madison Walker and Jennifer Allen and Henna put on one quality act after another right until the final hole.  That said, the feature card was only a fraction of the fireworks in today’s pristine conditions – just a little wind, plenty of sun, and dry. It’s good the field made great use of the scoring opportunity because the forecast is not looking great.

​Paige Pierce persistently produced parked drives and upshots today. A two time champion of the Jonesboro Open finished her round six under. She started the day slow, mostly due to a high putting problem in Circle 1, costing her two two-putts in a row to miss a birdie and settle for par in both cases. A bogey on hole five was all the motivation she needed to start fighting back. And fight back she did, with six birdies and one park-job of an eagle in thirteen holes. Ask for a battle with Henna and you shall receive it. After Henna’s struggles at the beginning of 18, she had thrown four shots before Paige was throwing her second. And throw that second shot she did giving her a long sniff of a second eagle. The line was pure, but the putt was low. And in the words of Valarie Jenkins, “The best three words in disc golf – tap in birdie!” Which come to think of it pretty much sums up Paige’s round – 29% Parked.

​No one could beat Catrina off the tee today, leading the pack in Circle 1 & 2 in Regulation, sadly 20 of the 30 player field putted better than Catrina. Only Paige Pierce beat her on Parked Percentages. That’s okay though because when you give yourself a look at the basket 72% of the time, you can still card eight birdies at a total six under par thanks to her two bogeys. If she can just bring the Circle 1X Putting up a bit higher she is going to be all but unstoppable. With this many players shooting so far under par though there’s plenty of pros with something to say about it. Catrina has more than earned her spot on tomorrow’s lead card and I can’t wait to watch her shred it.

Rebecca Cox may be one of the players on the lead card who didn’t finish the day at six under par but it doesn’t mean she didn’t touch it during her round. It was ultimately a bogey hole 17 that kept her from her share of a tie for the lead. Compared to the rest of the lead card, Rebecca did her work on the green, putting 82% in Circle 1X and 60% from Circle 2. It was a small handful of errant drives or upshots that kept her from being tied for first. She had just as many birdies as Catrina and one more than Paige but just three bogeys are holding her back.

Henna took sole possession of the lead with her drop-in solo birdie on hole 17. Henna’s first of only two real mistakes of the day came much, much early – hole three to be precise. Her drive was a great throw, but only a few degrees too far to the left, where it leaked out of bounds. But you don’t get to be one of the highest rated players by letting one bad break get to you. After that, she never went more than three holes in a row without a birdie. It’s day one, and on the 18th teepad you have the lead, hit the gap and finish without a blemish – you’ve got two more rounds of possibility left to make your moves. Her final drive of the day leaked left, caught the trees and then went missing….for probably all of the allowed 2 minutes and 59 seconds to find her disc. Her drive was found, a bit of rough in the way she fired off a sidearm and trickled just out into the fairway. After quickly collecting herself she went back to the well and pulled up some good fortune – putting a great forehand down the fairway. Birdie and even par were out of the question, but Henna let go of her possession of first with a triple-bogey 8 on the final hole. With that single hole, she went from the top of tomorrow’s lead card to the back.

Long story short, here’s what I’m telling you – believe it or not. Paige Pierce and Catrina Allen (the two highest rated players in the world are tied for first), right behind them are Rebecca Cox who has been shooting a ton of hot rounds lately, and Henna Blumroos, new to the US scene but still the fourth highest rated player in the division. Tomorrow’s card might get caught in the rain but I don’t think anything can put out the fire that this level of competition has sparked in all of the pros. Make sure you’re out of bed and have your coffee by 10 AM EST tomorrow when the lead card takes back to Disc Side of Heaven for the Play It Again Sports Jonesboro Open presented by Prodiscus.