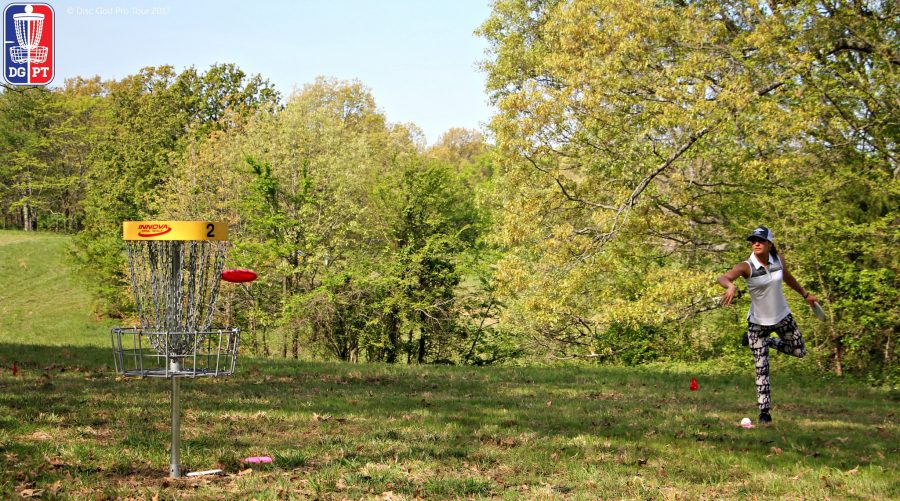 The Spartan Mowers / R&R Equipment Jonesboro Open presented by Prodiscus kicked off Thursday morning with the FPO division tackling the challenging Disc ​
Side of Heaven Gold Course. The featured card of the day had the big names of the division and did not disappoint. Paige Pierce, Sarah Hokom, and Jessica Weese tallied the three best scores of the day. Paige Pierce lead the pack with a 4-under par, 60, while Hokom and Weese came in at 2-under par, 58.
Commenting on her round, Pierce said, “I played really well off the tee and struggled after that. I just kinda putted scared because there’s so many baskets on hills… timid putts don’t really go in.”
Paige will look to improve on her 76% Circle 1 putting percentage tomorrow. While Paige was getting it done off the tee, Weese was nailing her up-shots and capitalizing on short putts. After only hitting 55% of fairways, Weese managed to scramble at an 88% rate to save par. She also sank 100% of her putts inside Circle 1.
Paige and Jessica battled for the entire round, matching each other shot for shot until hole 18. That was the site of disaster for Weese. She found the first available tree off the tee and then hit the very same tree on her recovery attempt. When it was all said and done, Jessica carded a double bogey, seven to fall two strokes off the lead.
“On my last hole, I really fell apart, other than that I felt it was pretty solid.” Weese said. She outlined her plan to get back on the right track tomorrow, “I am just going to focus on playing one shot at a time, one hole at a time and just do my best.”
While it looked like it was going to be the Pierce and Weese show, Hokom was lurking quietly in the background. After a slow start, Sarah finished with four birdies on the back nine to put herself in a tie for second place.
Recapping her round, Hokom said, “I had a lot of missed putts that I was like an inch away from making on the front and then I made some more putts on the back. I threw a couple of errant tee shots. Some of these tee shots don’t cost you, you can still recover and get your par, but some do. Unfortunately, it seemed like the ones I missed, cost me.”
Tune in tomorrow as the ladies tackle the Disc Side of Heaven Gold Course for the second day of the Spartan Mowers / R&R Equipment Jonesboro Open presented by Prodiscus.