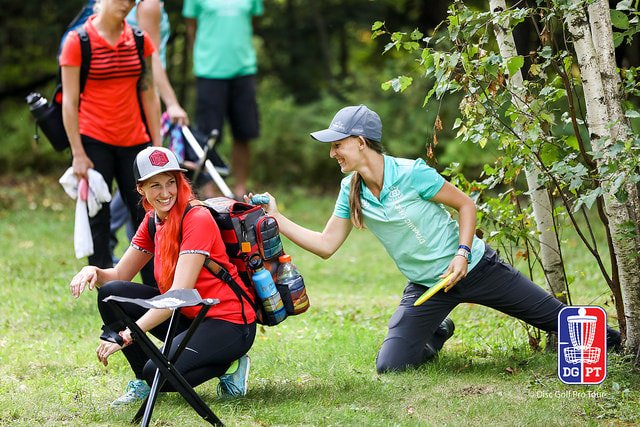 Paige Pierce knew she needed a multitude of birdies if she had any chance of coming off of the chase card to erase the six throw deficit she faced. She also knew that
if she took care of business, she could find those birdies.
“It was all about execution off the tee,” Pierce said. “The birdies are out there as long as the execution is good.”
Those birdies were indeed there for Pierce as she carded nine on the day en route to a 5-under par, 55 to finish 5-under for the event and complete the miraculous come from behind victory. Sarah Hokom finished in second at 4-under and Valarie Jenkins (-3) and Jessica Weese (-2) rounded out the top four.
Pierce put together the hot round of the day with not only excellent work off the tee but from around the basket as well. Paige connected on 94% of her circle one putts and hit two huge putts from circle two. After a back nine that included five birdies, Pierce was in the clubhouse with the score to beat.
As Pierce was tapping in her last putt, Sarah Hokom was just finishing up hole 12 and was at 4-under for the event. Down one with five holes remaining, Hokom still had time to make up the deficit. After parring hole 13, Sarah pulled back even with Pierce with a birdie on 14. On hole 15, Hokom was dealt a big blow, a double-bogey. Hokom now sat two strokes behind Pierce with just three chances to make it up.
Hole 16 provided an opportunity for Sarah to get a stroke back and after putting her drive 16 feet away, she canned the putt to pull it within one. A par on hole 17 kept her within striking distance but made 18 a must-get birdie.
Hokom’s drive on 18 landed on the edge of circle two, allowing her to at least have a tough putt to try and tie Pierce. But when Hokom got to her disc, she tossed an upshot under the basket, laying up.
After tapping in for second place, we caught up with Hokom to see if she was aware that she conceded the victory.
When asked if she knew the score and why she decided to not run the basket, Hokom replied, “I didn’t know.”
“It’s okay, I didn’t really have a good look,” she added.
The end result did not spoil Hokom’s overall outlook on the round.
“I feel good about the way I played the course. It’s a tough course and I can’t get a lot of birdies out there. Paige played great,” Hokom said.
Paige certainly did play great and the key to her success?
“It’s all thanks to my support system,” Pierce said.
With Pierce winning the Green Mountain Championship presented by Discraft, she secured her spot as the regular season points champion of the tour. Pierce, along with Hokom and Catrina Allen will receive byes to the semi-finals of the Tour Championship. The entire final standings from the tour can be found here .
The Disc Golf Pro Tour will come to its conclusion with the Tour Championship October 19-22nd in Jacksonville, Flordia. Will Pierce end her season the same way she’s been playing, dominant? Or will she be challenged by the likes of Hokom, Allen, Jenkins, and Weese? Stay tuned to the Disc Golf Pro Tour to find out.