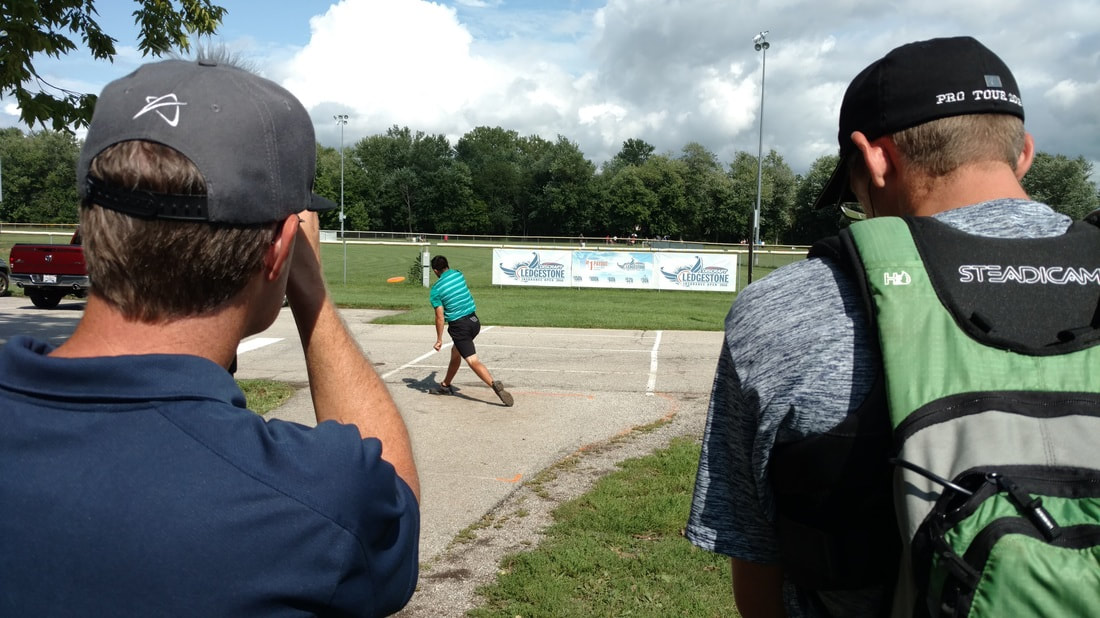 I was there. I told him to take a provisional, just like I do for everyone that plays the Vibram Open or any other event I run. Anytime there is confusion, play a provisional and take your time to figure it out correctly with the TD after the round.
The situation: It was the sixth hole of the third round of the fourth DGPT event. With a win, Paul McBeth would put himself in a good position to be in the top eight after the GMC and earn himself a bye to the Tour Championship Semis. At the time, he was leading the Ledgestone Open, presented by Discraft, by two strokes.

Here is a photo I took of the shot heard round the world. Oddly, it is the only photo of disc golf I took all weekend.

The daunting hole 6 throws over a baseball field. Players can play safe around the perimeter or opt to cut the distance significantly by throwing over the outfield. McBeth, like most of the top players, opted to go for the hero shot. His shot went OB at which point he asked if a retee was allowed.

Unless stated otherwise, a player can always rethrow from their previous lie with a one stroke penalty. The course rules indicated that all shots that go OB should proceed to the drop zone. The wording was not iron clad as to whether this meant that the retee was not allowed.

At this point, I volunteered that Paul should throw a provisional: one shot from the tee and one shot from the drop zone, play them both out, and have the TD decide which sequence of throws should be taken towards the final score. If there is a rules question, this should be standard procedure for any and all players.

Paul then threw his next shot, call it A3 (sequence A, third shot) from the tee. It went out of bounds also, at which point he decided to go to the drop zone, where he would be throwing shot A5.

From the drop zone, Paul then threw shot B3 (sequence B, third shot). It landed in bounds.

At this point, the assistant TD, who had reached out to the course director, informed the group that players must proceed to the drop zone if tee shots go OB and that there is no option to retee.
Paul then completed sequence B and carded his score.

This is the exact way that a provisional is supposed to be utilized, although in most cases you would not know the ruling until after the round and would therefore need to complete both sequence A and B. In this case, with sequence B being ruled as the correct sequence during play, sequence A was cancelled and not played out.