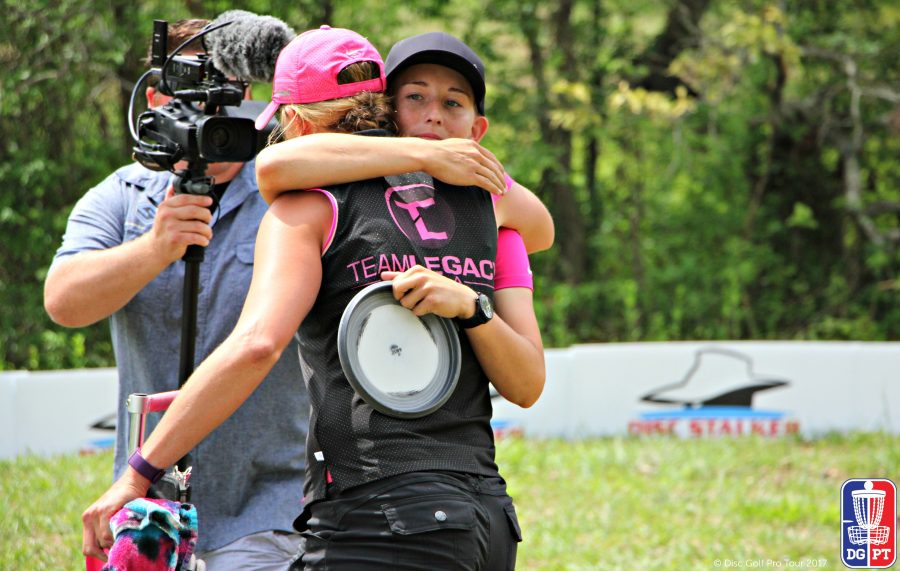 The final round of the Spartan Mowers / R&R Farm Equipment Jonesboro Open presented by Prodiscus for 2017 was a fight to the finish. Paige Pierce and ​
Sarah Hokom have gone head to head more times than they can count but this time the stakes seem much higher. Perhaps it’s the high profile attention that the Disc Golf Pro Tour has given the women’s division this year or maybe it’s because more disc golf fans in general get a chance to watch and read about these fantastic female players. Whatever the reason, these women are playing at the highest level that this sport or division has seen in recent years.
The competition between the ladies this year has put fans at the edge of their seats nearly every event and this one at Jonesboro is no exception. The day started with Sarah Hokom, four under par, holding onto a two stroke lead over her fiercest competitor, Paige Pierce, in second place only two under par. Rounding out the card was the young phenom, Jessica Weese, still within striking distance, at one over par.

Jennifer Allen started her final round well. Although she added some much needed birdies to her round, she quickly cancelled them out with two bogeys and a disastrous double bogey after her solid start. With the talent that Jennifer possesses, she wasn’t going to let her day end in that fashion. After the turn, Jennifer worked her way back, adding six pars and three birdies on the back nine. She raised her scrambling rate to 73% and in the process placed herself in striking distance of third place. Even overtaking Jessica Weese briefly late in the round and tied it up on hole #17 with a timely birdie. In the end, Jennifer just ran out of holes and ended her day four over par for the tournament and placing fourth overall.
Jennifer Allen Tournament Scoring

Today during the final round, Jessica Weese was split into two very different players. Front nine Jessica, and back nine Jessica. “Front nine Jessica” shot a three over par with two birdies mixed in. Her frustrating three bogeys and one double bogey truly dashed most of her chances to catch the leaders. Fortunately “back nine Jessica” wasn’t taking the poor start without a fight. She went on to card four straight pars to repair the damage, and earned five pars and two birdies overall after the turn to narrowly edge out Jennifer Allen to take home a third place finish at three over par for the week.
Jessica Weese Tournament Scoring

For the final round we saw a return to form from World Champion Paige Pierce. She had a few minor hiccups, with three bogeys on the final round, but she made a huge rebound just in time to battle fellow World Champion Sarah Hokom. In a way, Paige’s game held a lot less drama as her numbers are more consistent with what the fans have come to expect from this tremendous athlete.
Paige Pierce Tournament Stats

Her round may not have as many birdies to light up the card but what she did accomplish was a steady, solid round of disc golf. Taking the pars when she had to and raising her scramble rate to 79%.
Paige Pierce Tournament Scoring

Sarah Hokom may have wished she could have her first nine holes to do over, carding three bogeys before righting the ship on the back nine. What Sarah didn’t do was let the early poor scoring get into her head. She took what the course gave her, and with the aid of a strong circle 1 putting rate of 90% for the day, she always stayed steady as the lead switched several times.
Sarah Hokom Tournament Stats

The one thing that Sarah had not done the entire tournament was take a double or triple bogey. Almost every other FPO player did. Unfortunately, Sarah did just that on hole #14, book ending two birdies made by Paige Pierce on holes #13 and #15. That swing was costly with only four holes to play.
Sarah Hokom Tournament Scoring

With only two holes left to go on the final day in Jonesboro, Arkansas, Paige Pierce was leading Sarah Hokom by one lone stroke. Neither were ready to concede a win just yet. Paige after hole #17 took a huge birdie and Sarah answered right back to keep the spread to one stroke. With one hole left to decide the champion there was no more room for error. Paige managed an incredible birdie on hole #18 while Sarah could only manage a par. Paige Pierce won the tournament at Jonesboro by two strokes over a worthy rival, Sarah Hokom, not to mention bragging rights of having the hot round of the day with three under par. Jessica Weese won the third place spot and Jennifer Allen took fourth.
Today at the Spartan Mowers / R&R Farm Equipment Jonesboro Open presented by Prodiscus Paige Pierce and Sarah Hokom put on a battle that will not soon be forgotten. With the lead changing many times during the tournament it really was anyone’s to win or lose. Sarah put on a valiant fight, but fell to Paige Pierce within the last few holes of the event. Paige showed today why she is a World Champion. Congratulations, Paige Pierce, from all of us at the Disc Golf Pro Tour!