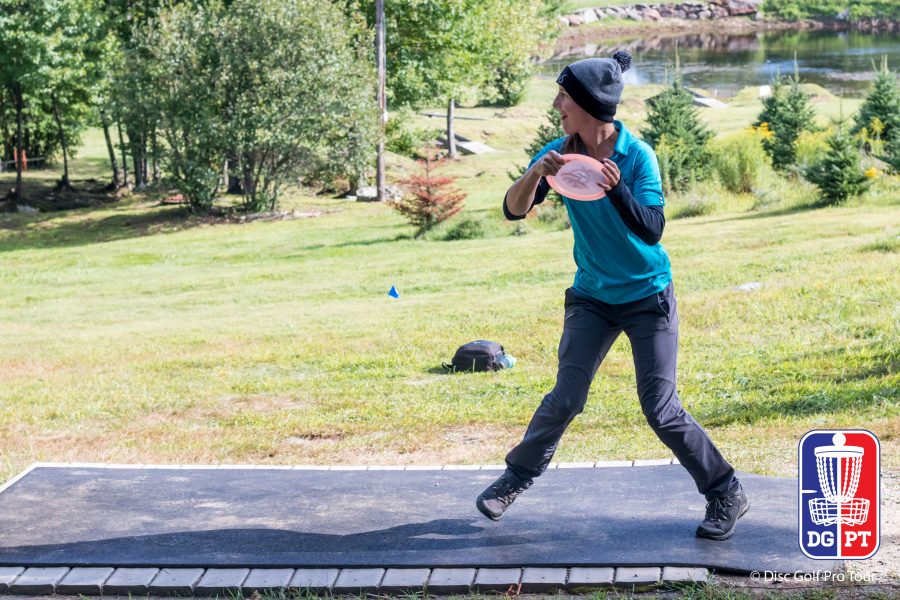 Paige Prevails at the Vibram Open: FPO Final Round

As usual, the women’s division had the best finish that any fan could ever ask for in a final round. If you are not keeping tabs on the FPO division this year you are
truly missing out! After three hard-fought days, it finally came down to the fourth and final round of the 2017 Vibram Open at Maple Hill. On the surface it may have appeared that Valarie Jenkins sailed through each round without a care in the world. But, if you know anything about the Maple Hill course, then you know that nothing comes easy. Along the way, Val may have held onto the lead throughout, but there were countless moments that defined her attempt to become this year’s Vibram Open champion.  With only a handful of strokes to keep her out in front, Val Could have lost those strokes in literally hundreds of situations which makes her lead after three rounds all the more special.
An honorable mention goes out to Erica Johnson who was actually the first of the ladies to card a birdie during the final round. She converted two birdies in the first four holes.
Jessica Weese this season has had flashes of success suggesting that, in the future, she might become a premiere player in the sport of disc golf. She has the ability to throw long both backhand and forehand, a precious commodity in the FPO division. Today during the final round, Jessica was moving in the wrong direction throwing out-of-bound the first two holes and going over par to begin her day. Sadly, Jessica never made a push the rest of the day. Bright spots came on holes 16 and 17. She finished her round with (+14) in fifth place.
Vanessa Van Dyken bounced back from a rough third day and shooting a solid round and overtaking Jessica with a (+12) and settling in fourth place.
Catrina Allen has worked hard throughout the Vibram tournament to keep her disc level as well as keeping bogeys off of her scorecard. After starting the final round seven strokes behind the leader Valarie Jenkins, Cat had very little room for error which made her triple-bogey on the very first hole all the more damaging. She was, however, able to able to execute two scrambling shots the next couple holes after leaving her drives short. The ability to recover is admirable but that was not the position that Catrina wanted to be in early in such an important round. Catrina ended the tournament (+7) in third place.
Paige Pierce threw a beautiful drive landing right on the fairway of hole 1. That was the kind of start that Paige needed to shed the final round jitters, and to cement her tempo for the day. Unfortunately, she got into trouble and was not able to recover leading to a bogey right out of the gate. It wasn’t the way she wanted to start, but by the fourth hole she was able to get her drive close and drain a circle’s edge putt, and with that birdie she brought herself right back into the hunt. Paige kept her composure, played her game until Valarie made some costly mistakes, and that was when Paige took advantage of her opportunity.
On paper Valarie Jenkins had been on cruise control for most of the tournament. Having a six stroke lead over her closest competitor (Paige Pierce) on the final day could have fed her confidence level in a big way. It was clear during the third round that Val was playing very conservative to protect her lead, a choice that seemed wise in hindsight. But after four rough holes in succession, Val found that her large lead was cut to dead even by hole seven. Her advantage was cut to zero with ten holes still left to overcome.
At the start of the eighth hole it was a whole new ballgame! Valarie regained her lead by one stroke over Paige and from then on it was anyone’s title to win.  The course was tough, no question, but one has to wonder if the nerves may have gotten the better of the four-time world Champion Valarie Jenkins as she carded yet another bogey on Hole 9. At that point Paige Pierce had strung together six pars in a row and the only drama had been Val’s up and down roller coaster ride that saw her grab back the lead once more on the tenth hole.  Unfortunately, Val could not hold onto the lead for long. She carded two bogeys and a double bogey that sealed her fate. Val finished with a (+3) four strokes behind Paige and in second place. Paige Pierce played hard, played clean, and made no mistakes down the stretch. Paige Pierce finished her final round with a (-2) and her total for the round was (-1).
Paige showed her skills on the course today. She played from behind all week and made a great come from behind victory at the 2017 Vibram Open! Congratulations Paige Pierce from all of us at the Disc Golf Pro Tour.