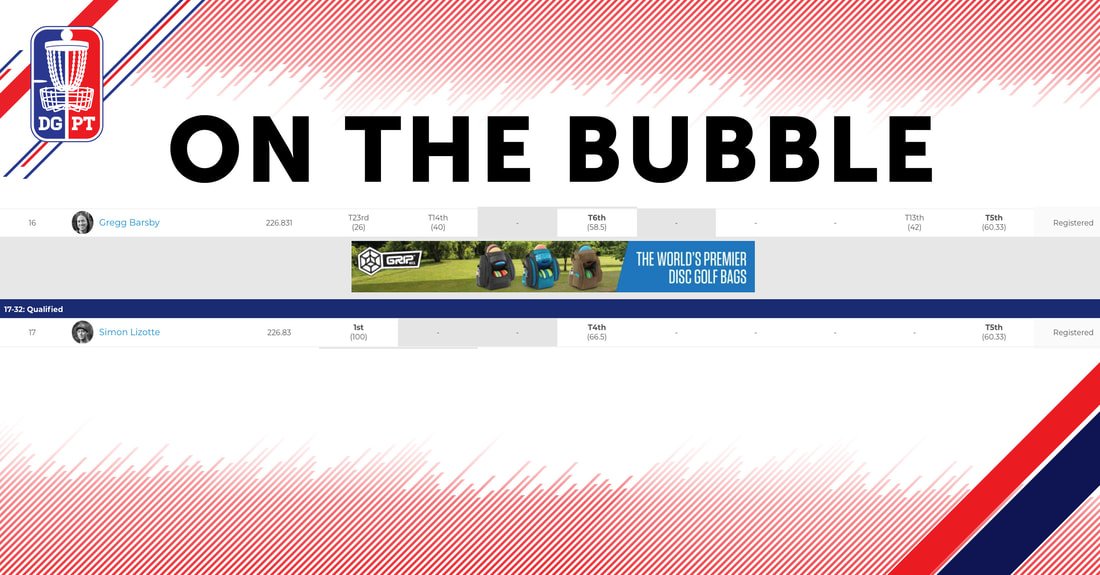 ​Within an hour of the final putt at the MVP Open, the Tour Points were calculated, and we had our top 32 for the MPO field at the Tour Championship. As we reviewed the standings and points we noticed one thing, there was a tie on the line between those who qualified and those who had a bye to the quarterfinals.

Simon’s qualified status creates a unique position where he could easily play his way into the Tour Championship all the way from Thursday. If Simon is playing in the semifinals on Saturday, he will be a wildcard in any of the four semifinals groups. He has the potential to win the Tour Championship should he put together a peak performance October 18-21st.

Gregg Barsby has been around the Disc Golf Pro Tour a little longer than Simon. In 2016 Gregg qualified for the Disc Golf Pro Tour Championship and ended up losing in the quarterfinals. Last year, Gregg finished 8th in Pro Tour Standings which gave him a bye to the semifinals where he was on a card with Ricky Wysocki. Ultimately Gregg was unable to get anything going finished bottom of his grouping during the semifinals . This year Gregg will be looking to advance past his quarterfinals bye and get things rolling at the New World Sports Complex early to try and proceed through the tournament and capitalize on his well-earned bye.

When Barsby earned his quarterfinals bye after the MVP Open, he was yet to win Worlds. The questions on the bubble surrounded Simon and his early season woes. Questions like: will Simon regret missing WACO because of traffic or question his withdrawal from Jonesboro due to injury ? Now it looks like Barsby was getting some early Champ love with his bye.

Both of these players have what it takes to win the Disc Golf Pro Tour Championship. One will just have to play an extra round to get there. Where do you think Barsby and Simon will finish at the Disc Golf Pro Tour Championship October 18-21? Put those picks into action by joining our bracket challenge and get ready to watch it all go down here in a little more than a week!