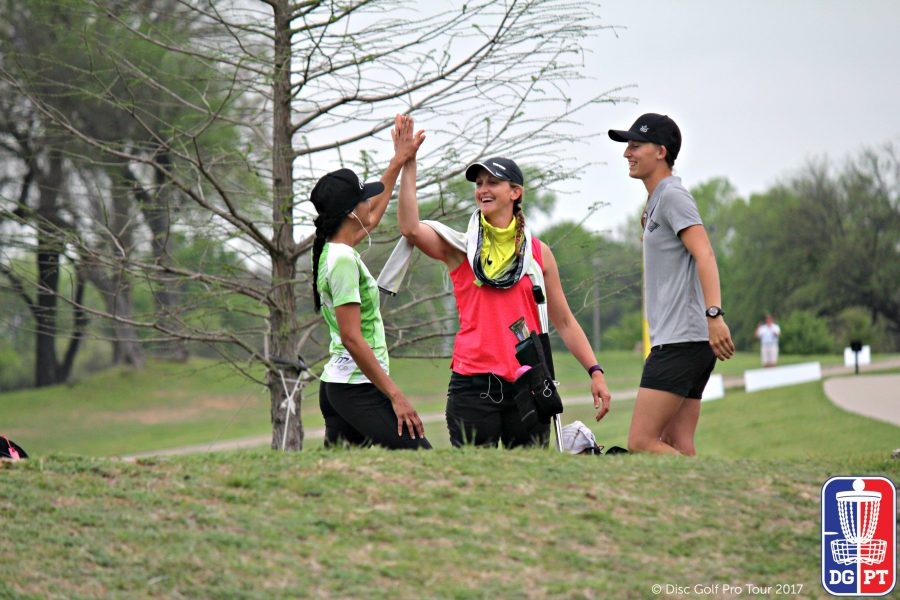 Paige Pierce has been dominant this year. Not only had she won both Disc Golf Pro Tour events of the season (The Memorial and WACO) but she also had not lost ​
a single tournament during the 2017 season. Pierce was six for six on the year including a Major victory, a National Tour victory and two Disc Golf Pro Tour victories and looked to be the no-questions-asked favorite at the Nick Hyde Memorial powered by Innova and Hyzerbomb. So, it came as a surprise to many, that on a weekend in between Pro Tour events, Pierce suffered her first loss of the season at The Open at Temple. Pierce’s second place finish to Catrina Allen showed that yes, she is in fact human and can be beaten.
What has been the key to Pierce’s success this year? It’s pretty simple actually, Pierce is carding birdies more than everyone else and bogeying less. Paige has only thrown a bogey or worse an incredible 13 times through the tour’s first two events. Pierce has been accurate off the tee, leading the division in both circle 1 and 2 in regulation and is third in fairway hits. The key for Pierce this season has been the fact that in those rare moments in which she finds herself off the fairway, she is recovering. Testimony to this her top of the pack, blistering, 79% scramble rate. Will Pierce’s recent loss shake her confidence or will the star show her mental toughness and bounce back for a Nick Hyde victory? I don’t expect to see Pierce off of the top of the podium for long. As the two-time, defending Nick Hyde champion, another Pro Tour victory looks well in reach for Pierce.
It’s no secret that Catrina Allen’s 2017 season is off to a slow start. The 2016 Disc Golf Pro Tour champion struggled to fourth place finishes in both the Memorial and WACO. The good news for Catrina is that she still sits in the top three in Tour points and is in a position to make a move. In order to make a run at defending her title, Allen will need to improve some aspects of her game. Allen was last year’s statistics leader in both fairway hits and scramble percentage at 64% and 67% respectively. This year, Catrina’s fairway hits percentage has dropped slightly to 61%, but her scramble percentage has dropped significantly to 51%. If Catrina can start dialing in those shots from off the fairway, she could be one of the few that can challenge Pierce. The win at Temple should give Catrina some confidence and there is no doubt that a good showing at Nick Hyde would go a long way towards Allen’s chances of repeating as DGPT champion.
Sarah Hokom has been within striking distance of Pierce at both the Memorial and WACO, but Pierce outlasted her in both events. The biggest improvement that she needs to make is inside of circle 1. She is only making 80% of those putts which puts her 16th on tour. Hokom is not a bad putter, in fact last year, she was the best putter on tour, knocking down 89% of her circle 1 putts. Whether it’s knocking off early season rust or just finding her putting stroke, if she can see her putting return to last year’s level, there is no doubt she has the skills to be on top of the podium. Hokom will look to improve on a third place finish in last year’s Nick Hyde event.
Other names to keep an eye on during the event include a pair of Texas natives, Lisa Fajkus and Stephanie Vincent. Vincent had a strong showing at WACO finishing in an impressive third place and playing well above her 909 rating. Fajkus has had success in the past at Nick Hyde and finished second in last year’s event. These two could easily make some noise this week and if you are looking for a fantasy sleeper pick, they should be at the top of your list.
Whether it’s Paige Pierce continuing her Pro Tour dominance, Catrina Allen returning to previous form, Sarah Hokom finally breaking through or a surprise win by someone outside of the top three, the Nick Hyde Memorial powered by Innova and Hyzerbomb will be an event that you won’t want to miss. Be sure to tune in when the action kicks off on Friday to see who will be standing on top of the podium at the third event of the Disc Golf Pro Tour season.