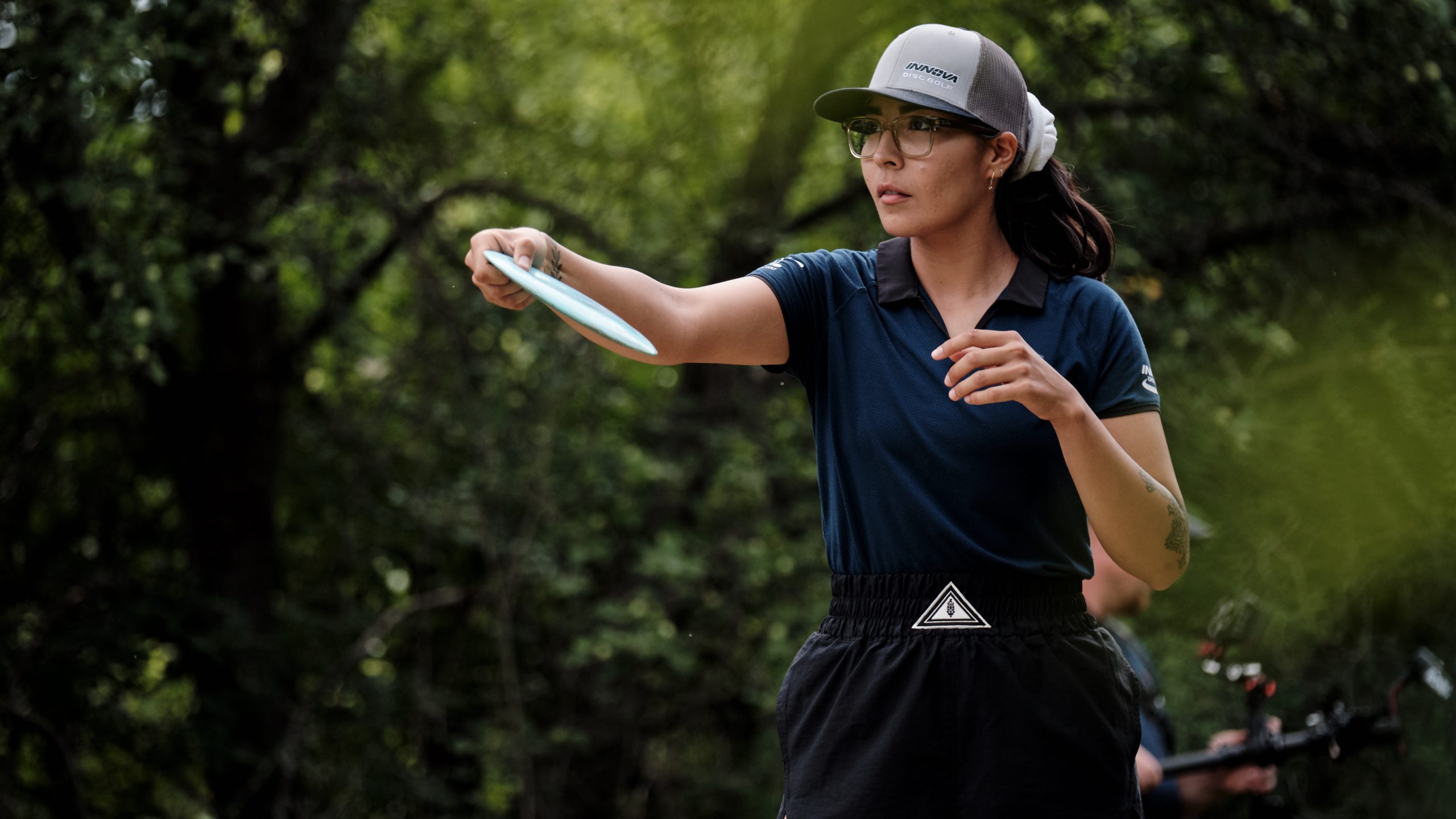 By Baker HeltonJuly 2, 2022No Comments

At the midway point of the 24th running of the USWDGC, these five take the title of leader into the final two rounds in Madison, Wisconsin. For the remaining 14 divisions, the leaderboard is tight, and the rest of the field is there, ready to charge.

But there’s a mix-up in Madison beginning Saturday as the entire tournament now shifts to new courses for the rest of the historic event.

There are new leaders, but there are plenty of players looking to make a move on moving day and chase down a PDGA Major championship.

Maria Oliva is starting to get comfortable, and it’s showing on one of the sport’s biggest stages.

With her first career 1000-rated round, Oliva carded the hot round of the first two days with a 12-under par finish on Friday to jump to the solo lead. The Texas native torched the back nine with a sizzling 8-under par finish, connecting on putts of 49 and 60 feet over the final three holes to jump into the lead.

‘Shook’ is how she described it.

“I knew I played pretty ok, but I did not expect to see double digits on the scorecard,” said Oliva, who is on the full tour for the second year. “This whole year, I’ve been comfortable in my game — I just haven’t been comfortable (in my head) but I’m slowly but surely feeling like myself when I’m playing for realsies, so It’s been cool to see. I’m super excited.”

Oliva leads the tournament in strokes gained putting at 10.49 and is 96% on the weekend in C1X, according to UDisc.

Eveliina Salonen leads the tournament in fairway hits, and is 89% in C1X. Photo: Conrad Meyer / PDGA

Also feeling comfortable with her game is Eveliina Salonen, who also joined the double-digit club on Saturday with a 10-under round and solo possession of second place. Like Oliva, Salonen said she was a little surprised by her final score, given a slower start to the much calmer second round. Salonen, who leads in fairway hits (86%) and circle 2 in regulation (86%) to go with an 89% mark in C1X putting, finished seven down on the back nine and is one stroke back of Oliva.

The rest of the lead card — Hailey King (3rd; -17) and Ohn Scoggins (4th, -16) — remains the same as action shifts to Elver Park, which, while still on the shorter side, will test the field in a new way with its elevation and woods.

Sai Ananda was the third player to hit double digits and jumped nine spots to lead the chase card. She’s joined by Deann Carey, who rose seven spots with a 9-under round, Catrina Allen and Valerie Mandujano.

Katara Vasher is the new leader in FA3

New Leaders Head to the Weekend

Barrett White has 254 wins in 399 career events and is chasing down her 10th PDGA Major title.

She’s that much closer after an even par second round on Saturday to jump to a four-stroke lead over Nova Politte in FP50, which shifts to Heistand Park for the rest of the weekend.

In FA40, Linda Ray turned in a clean front nine at Elver Park, the only player in the field to do so, to claim a one-stroke leader over Kim Keen and a two-stroke lead over Christie Hundley and Janae Chaney.

Katara Vasher had the hot round in Recreational by five strokes, aided by one of only two birdies on the day on hole 12 at Heistand. Her even-par round gives her a two-stroke lead over Samantha Landers, Jillian Geiger and Clarisa Bingham as the head to the Capital Springs track.

In FJ15, Therese Cuevas carded four birdies and just one over-par hole on her way to a 899-rated 2-under round on Friday. She leads Kayla Hess by four strokes.

Jennifer Allen is up by six strokes in FP40. Photo: Conrad Meyer / PDGA