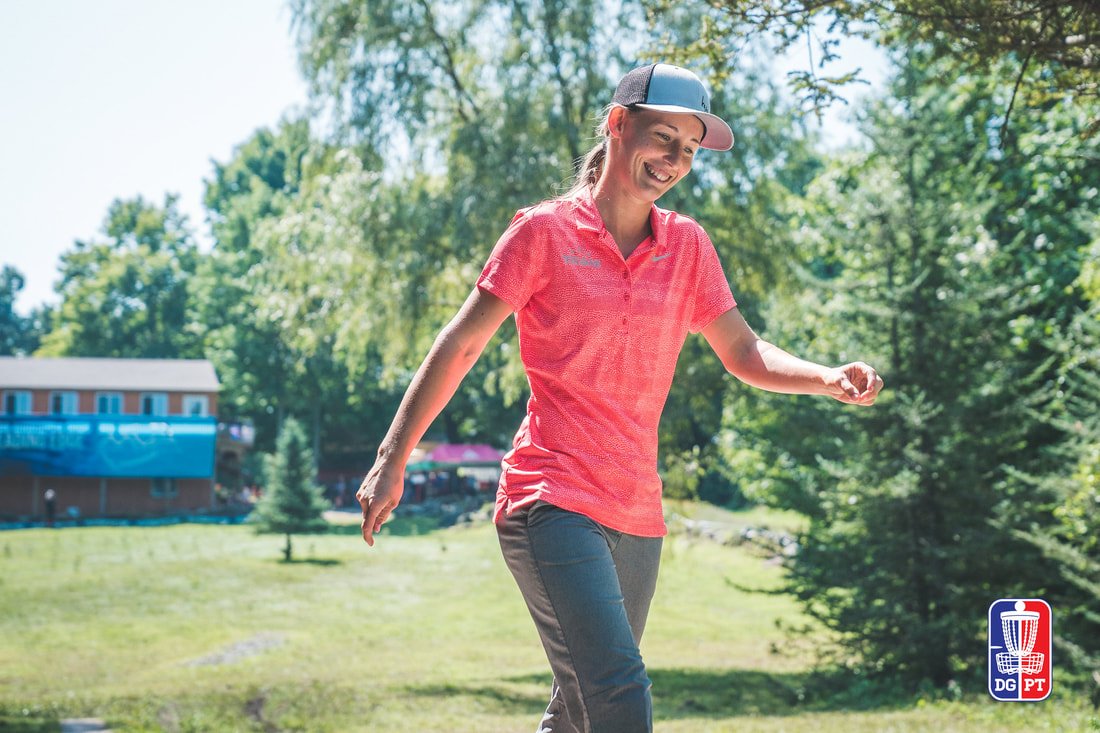 ​On a picturesque Massachusetts day, the scoring conditions could not be more ideal for the first round of the MVP Open at Maple Hill. A familiar battle is unfolding before our eyes. We will need to follow along this weekend to see if the constant holds and a familiar face will take the podium on Sunday.

A familiar face started the day strong with Paige Pierce carding her first birdie on hole two and not looking back. Paige would start a par-free streak on hole seven that would not end until hole fourteen. While that comprised of five birdies, there were also two bogeys mixed in there. Pierce would pick back up the birdie streak on hole fifteen, and that would go until hole eighteen when she carded her third OB penalty of the day. During the round today Pierce commented to her caddy that she leads for the season in most OB strokes. That was the case today too. When looking at tomorrow’s lead card the rest of the card has fewer OB throws in today’s round than she did. Paige would finish the day with a double-OB, double-bogey six on hole eighteen which would give her only a two throw lead going into moving day. When asked about her OB’s Paige said hole one and nine were because she was playing aggressive. On hole nine, in particular, she said, “If I have a putt inside the circle, I’m still going to go for it and not feel bad about missing it.” Discussing her double-OB on eighteen, she said, “I don’t feel comfortable off the tee there, I didn’t feel comfortable after practice, and I think I’m going to change my gameplan for tomorrow.” Paige finished the day four throws ahead of where she finished last year on day one, and she chalked it up to good putting, “I landed three C2 putts within the first four holes, and I think that was the difference.” Make plans to tune in tomorrow to see how she and the rest of the field handle day two of competition.

A not-so-familiar face to jump out early and finish under par for the day was Kristin Tattar. Kristin is continuing her US tour and was able to grab her first birdie of the day on the downhill hole four. She would struggle in the middle of the course ultimately carding two bogeys and then a double-bogey on the treacherous hole fourteen. She landed in the water on the drive and ended up two-putting on the green to finish with the double-bogey. Kristin overcame her struggles though by making back-to-back birdies on holes sixteen and seventeen.

Perhaps the most impressive round of the day came from Catrina Allen. Catrina would card a bogey on hole two and not look back. Catrina had a phenomenal day placing almost every single one of her drives inside C1 or C2. Outside of two-putting on hole seven Catrina had a solid day inside C1 but missed 100% of her C2 putts. Even if Catrina had landed half of her C2 putts would be well in the lead. Catrina finished the day four down and within four strokes of the lead going into moving day. When asked about her round Catrina immediately said, “I had an awesome group” following up on that Catrina added, “I was just executing my game plan, I would have liked to have more shots at birdies on the par fours, but other than that I was giving myself looks which was good.” Looking towards tomorrow, Catrina concluded, “all my jump putts were on” (she motioned at the basket and indicating many of them were just missing on the front cage) and “I just really had an awesome group.”

Rounding out the lead card tomorrow will be last year’s winner Sarah Hokom. Last year Sarah finished the day tied for the lead with Paige Pierce before eventually going on to win the tournament. Last year that score was a -2 round. This year with better scoring conditions, a two-under would not cut it for the hot score of the day. Sarah was gunning for a day similar to Pierce’s except three holes got in the way. Holes three, twelve, and eighteen all gave Hokom issues on the green. She two-putted on each of them, which is what led to the bogeys (and double-bogey) on the three. She will look to clean those up and hopefully card a few more birdies for moving day tomorrow.

Players to watch tomorrow not on the live card will include Elaine King, Missy Gannon, and Rebecca Cox who all made moves towards the end of their rounds. Each player grabbed back-to-back birdies on sixteen and seventeen and moved into a tie for fifth place. Each of them has what it takes to make a move to the lead card on Saturday. Make sure to tune in on Udisc Live to follow their scores.

Make plans to tune in tomorrow morning to watch the FPO lead card live at 9 AM ET as Paige Pierce, Catrina Allen, Sarah Hokom, and Kristin Tattar take on the Maple Hill course once again.