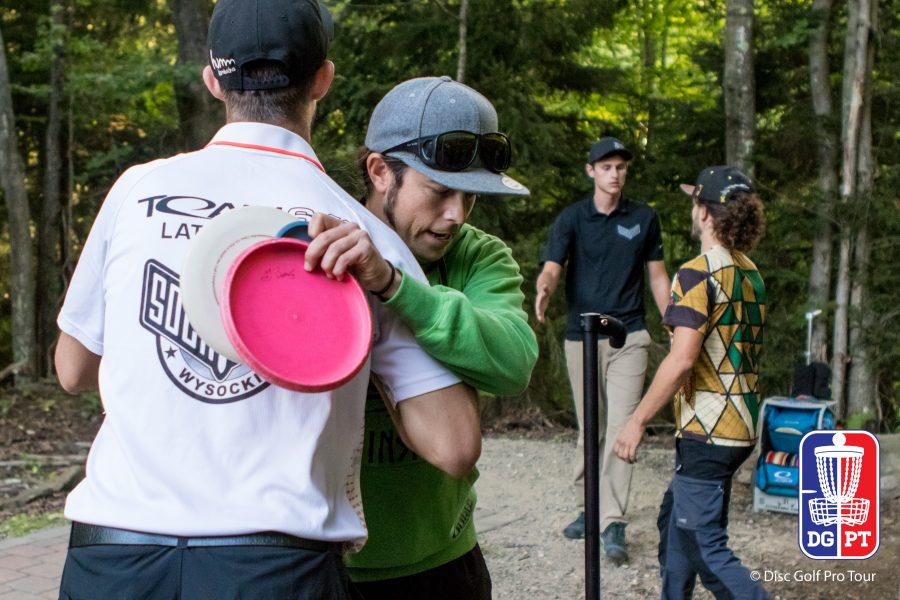 Moving day has come to a close at the 2017 Vibram Open here at Maple Hill and the top pros have delivered in dramatic fashion with fantastic play. Still atop the leader
board, after an impressive six under par is Gregg Barsby, finishing at a total of 20 under for the week so far. Barsby, however, was unable to hold on to sole possession of the lead as Wysocki threw a stunning 10 under par to tie for first, including an unprecedented seven birdies in the final eight holes.
Ricky Wysocki started today on the chase card, but will be on top of the leader card tomorrow. Compared to his back nine, Wysocki was off to a slow start on the front. The back nine is where Ricky lit up. Starting on hole 11 he cleared the 782 feet in two throws for a drop in birdie. Not to be slowed down by having to putt, Ricky locked in a birdie on 13 from circles edge. On 14, Ricky sank his longest putt of the day at 60 feet into a basket only feet from the pond looming beyond. From there forward, on holes 15 through 18, Ricky parked every drive or approach he took for drop in birdies from five feet away. Wysocki’s 50 today was rated at 1070 and is the hot round for the tournament so far.
Despite Ricky parking so many shots in a row it’s still his prime competition, Barsby, who holds the top spot for parked shots this week at 24%. Barsby had another strong round at 54. He threw seven birdies, but found trouble on holes 3, 7, and 17. Fortunately Barsby also found the perfect line on hole 5 letting his forehand hyzer ride high and smashing the chains for the 285 ft over water ace into an elevated basket. Don’t worry, it was caught on film and you will get a chance to see the footage soon.
As seems to always be the case at the Vibram Open, the final day is well lined up to be epic golf. We have six players within five throws at the top of the pile. Tied for first is of course Ricky and Gregg, Nate Sexton is in third, James Conrad in fourth, and Nate Doss and Paul McBeth are tied for fifth. Today’s perfect weather seems unlikely to repeat though as our forecast is calling for a high of 53 degrees and rain throughout most of the afternoon – less than ideal conditions for throwing plastic. Never the less, we will still be bringing you the same fantastic live coverage tomorrow on udisclive, youtube, Instagram, and right after the round ends, our final recap posted for your enjoyment here. Until then start scouring the internet for whoever caught Barsby’s ace on tape!