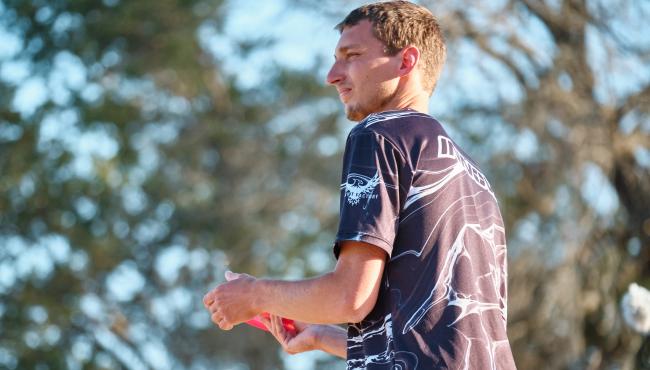 Moving Day Sets Up Battle at the Top

Once Calvin Heimburg took off on Saturday, there was no stopping him.

His ascent to the top of the Disc Golf Pro Tour – 27th Annual Texas State Disc Golf Championship presented by Latitude 64 was just one of several big moves on moving day in Tyler, Texas.

Heimburg birdied eight-straight and 10 out of 11 holes in round two to build a two-stroke lead over Ricky Wysocki heading into Championship Sunday.

For round one leader Paul McBeth, moving day went the opposite way as an even-par round – 12 strokes worse than his opener on Friday – dropped him seven spots down the leaderboard and nine strokes behind Heimburg.

On the FPO side, there wasn’t any movement at the top other than Paige Pierce’s lead, which grew to five strokes with 18 holes to play on The Thorn at Lindsey Park.

“I feel pretty confident playing this course,” Heimburg said. “I feel good about hitting the gaps in the woods, and my putting has felt pretty good this week.”

Heimburg hit the gaps alright, including a tight window on hole 8 for a 90-foot birdie to grab the solo lead as McBeth sputtered. He followed with a 49-foot connection on nine for one of six twos on the day on that hole. Both came in a dominant eight-hole stretch.

Wysocki, meanwhile, surged down the stretch, running in putts on 17 and 18 with back-to-back, 50-foot hits to match Heimburg’s 11-under round. The strong finish pulls Wysocki square into the mix as he looks to go 6-for-6 at in his trips to Texas States.

James Conrad and Gregg Barsby with six and seven-under rounds, respectively, kept their spots on Sunday’s lead card and six three strokes back of Wysocki.

With slightly-windier conditions in the morning, Pierce’s 4-under — five strokes worse than her first round — kept her name atop the leaderboard and added one stroke to her lead. Kristin Tattar and Catrina Allen are five strokes back at 8-under.

Pierce did most of her work on the back nine on Friday, and it was the opposite on Saturday.

“Mostly good today,” she told the Disc Golf Network’s Terry Miller. “Overall, I am super stoked. I extended my lead and got a little bit of a cushion going into Sunday.

“Now I know all the holes that I can get birdies on. Sunday, I have to put it together – the back nine from Friday and the front nine from Saturday.”

Maria Oliva had the hot round on Saturday on The Thorn. Photo: Kevin Huver / DGPT

Maria Oliva had the hot round in FPO at 5-under to jump to the lead card.

Live coverage of the FPO begins at 9:30 a.m. CT on the Disc Golf Network and on the DGPT YouTube page. MPO action kicks off at 3:30 p.m. CT.