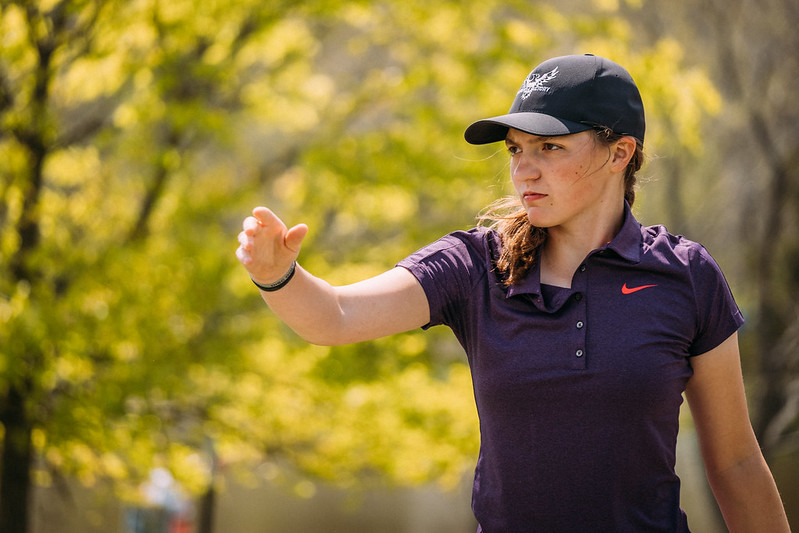 By David WeaverApril 25, 2021No Comments

The final putts have dropped at the 2021 Mid-America Open and two new champions have been crowned at the third Silver Series event of the season.

In the MPO field, Kyle Klein finished his tournament with a stellar 45 (-10) final round which propelled the young pro from Michigan to earn his first DGPT event win of his career at an impressive -27 under par. Klein finished the tournament two strokes ahead of Emerson Keith and Chris Dickerson who shot 45 (-10) and 47 (-8) and tied for 2ndplace at -25 under par.

Klein’s back to back 55’s make him the only player of the tournament to record two double-digit under par round throughout the event.

Not to be outdone on the final day was Connor O’Reilly who shot the low score for the tournament at 44 (-11) which catapulted him up nine spots from 13th to 4th with a round rating of 1064, impressive stuff from the Latitude64 sponsored Texan.

Chris Dickerson’s solid play all weekend lead to a 2nd place finish and 20 points in DGPT tour points which bump him into 6th place in overall points for the season.

In the FPO field, things came down to the wire on the lead card as all four ladies who started the day in the top four, battled it out for a chance at the win.

Ultimately, Heather Young (who put together a much more consistent round than she did on Saturday) came away with the victory by shooting an even 55 final round to edge out a one stroke lead over her nearest competitors. Young’s finish at +2 over par for the tournament earned the Kingston, TN native her first DGPT event win of her career and proved to fans everywhere that she has what it takes to close out big tournaments with big name competitors nipping at her heels.

Many expected 2021 to be a breakout year for team Prodigy’s Heather Young. A win at the Mid-America Open confirms exactly what fans wanted to see this season, a new “young” star in the FPO division.

Fighting back hard on the final day for a chance to capture the win was Vanessa Van Dyken who like Heather Young, also shot even par to finish her final tournament round. Van Dyken’s Sunday round consisted of 16 pars paired with a birdie and a bogey which was certainly the most consistent round during the final day in the FPO division. Her solid play to finish the tournament bumped her into a tie for 2nd with Ellen Widboom who also finished at +3 over par for the event.

Widboom, who played great golf all week and consistently put herself in position to win, struggled to connect on any birdie opportunities on Sunday which led to a final round score of 57 (+2), only 1 stroke off the lead. Also finishing with a final round score of 57 was 4th place finisher Missy Gannon who like Widboom put herself in position to fight for the win coming down the stretch. However, bogeys on the 12th and 16th holes put Gannon just 2 shots out of the lead and ultimately led to her +2 finish on the day.

Vanessa Van Dyken’s final round of par (55) tied her with three other women for hot round of the weekend in the FPO division.

And just like that, two new DGPT Silver Series Champions have been crowned! Despite a venue change, unpredictable and unseasonably bad weather, and slightly sloppy conditions; the third Silver Series event of the 2021 DGPT season has come to an end the tour moves on to its next event.

Please join us at the fourth Silver Series event of the season as the DGPT travels to Oceanside, CA to hosts the Challenge at Goat Hill Park, May 7-9. Live scoring for both the MPO and FPO divisions will be covered as always by UDiscLive. Final Round Live Coverage will be available through Disc Golf Network.