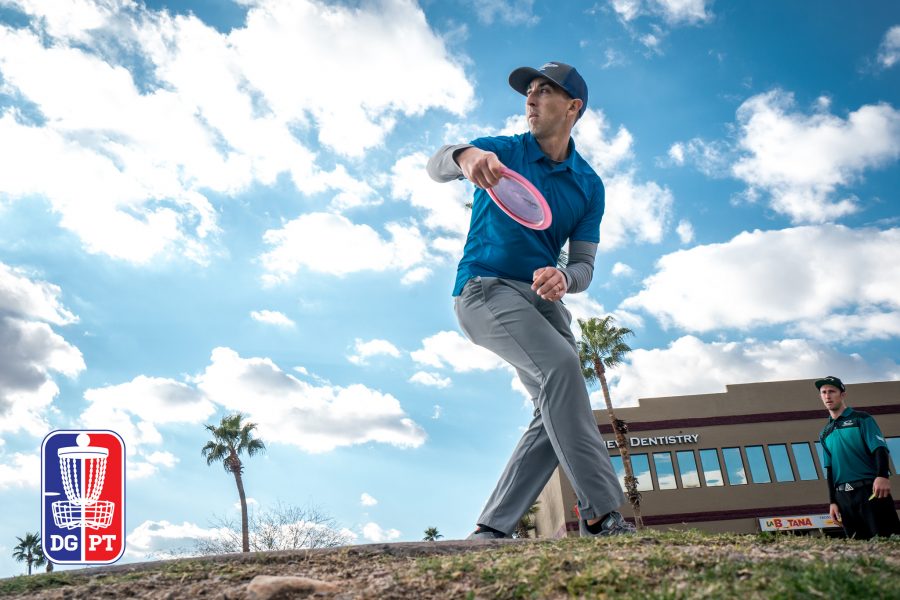 McBeth Rises to the Top

Round two of The 2018 Memorial Championship presented by Discraft played out on the Vista Del Camino XL course. We started the day with a tight pack of players all vying for
the lead. We ended the day with one person leading the pack.
Throughout the day there were several lead card stalwarts who had a shot at being on the lead card tomorrow but ultimately ended up coming up just short.
Ricky Wysocki
Ricky started the day on the lead card and ended up with an uphill battle to try and stay on top for tomorrow. He shot a clean round up until he took a five on hole 15. However, it was not the five that caused him to miss the lead card. Ricky missed several key birdie holes (hole two and hole eight to name a few) that would have helped him stay on the lead card. He will be chasing tomorrow looking to get back on the lead card while playing out at Fountain Hills.
James Conrad
James tied for the hot round today carding a flawless -13. However, he was making up ground for a lackluster round one that saw him finish -6 yesterday at Fountain Hills. James also will be chasing tomorrow, he will need to shoot a few strokes better out at Fountain in order to have a look at lead card on the final day of The Memorial Championship.
Dave Feldberg
Dave was chasing all day today, working to makeup ground from a -6 that he shot out at Fountain Hills. However, Dave did not find enough birdies to land him on the lead card. Dave will be rounding out the bottom of the chase card tomorrow hoping he can make it onto lead card.
Tomorrow’s Lead Card at Fountain Hills
The lead card is a list of people you would expect to see at the top. Today Eagle McMahon and Simon Lizotte were on the chase card and pushed both each other and the lead card all day. Simon started hot shooting -8 through eight holes. On hole 9 he carded a bogey and but recovered by birdieing five more holes on the back nine before rounding out the day with a bogey on eighteen. In both cases his shot was right on line but barely skipped OB. Eagle shot a flawless day carding eleven birdies in route to his -20 for the tournament.
Nikko Locastro battled it out on the lead card today with his only blemish being a double bogey six on hole six. Nikko carded twelve birdies and only had a few opportunities to have shot better (outside of the double bogey). He will be two throws off the lead tomorrow, owning the bottom slot on the lead card thanks to his lower PDGA number.
The Story of the Day
Paul McBeth started on the 4th Card today and put together a hot round to land him in the lead after 36 holes of play. Paul McBeth could have been -14 on the day if he had not taken a bogey on hole 13. Paul started the day two strokes off the lead but was able to capitalize by shooting the hot round today. He will be looking to avoid the double bogey he took on hole one at Fountain yesterday in an effort to build his lead further tomorrow for round three of The 2018 Memorial Championship presented by Discraft.
You can catch all the action starting tomorrow at 4pm ET at http://www.dgpt.com/watch/live .