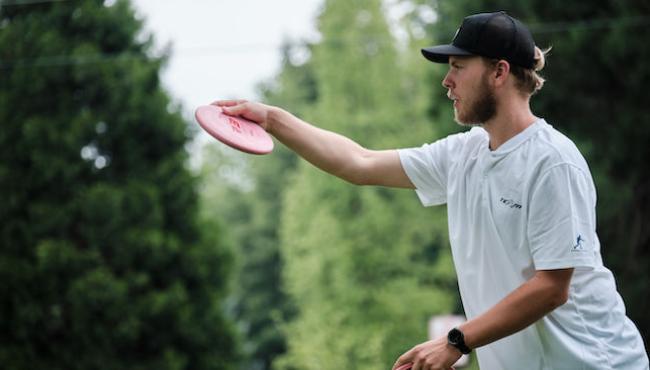 Making Headlines From the First Tee

By Baker HeltonJune 3, 2022No Comments

In truth, it was a suit. Single-breasted, with a matching tie.

Resplendent in Times New Roman, starter, Michael Grummert welcomed the early morning FPO card to the opening tee, kindly reminded them of a tough-to-see mando on the fifth hole, and then in a sharp baritone, announced Alex Benson would tee off first.

The 2022 Portland Open Presented by Dynamic Discs was underway.

“It’s sort of my thing,” said Grummert, “Like Craig Sager did on NBA games.”

It’s a touch that isn’t necessary – Blue Lake boasts more than enough style and history – but it is appreciated, and players and fans alike voiced their approval of the headline-clad herald.

Players love the course at Blue Lake – a rare track where both FPO and MPO players know a scorching hot round is there for the taking, but at the same time, par almost always feels like an acceptable result on any one hole. Out-of-bounds lines are plentiful without seeming gimmicky. The test feels fair, and players with different strengths can each succeed.

That’s exactly what transpired during day one in Portland.

Through one round – at least – Blue Lake kept the FPO field close.

Valerie Mandujano holds the solo lead at 5 under par thanks to a sizzling 6-under on the final six holes of her round capped off by a 60-foot birdie at the last. Mandujano’s well-rounded game limited her O.B. penalties to a single stroke on the day.

The season has been quiet for Rebecca Cox, but a perfect day inside C1X made more than enough noise to put Cox in second place after the first round. Cox embraces the nervousness that comes with playing in front of the cameras and the crowd, as she will have to do during the second – and final – loop around Blue Lake.

Rebecca Cox tees off the first at Blue Lake Regional Park in Portland.

The masters-division is well represented in the FPO field thus far. Juliana Korver and Ohn Scoggins share third place going into round two. Scoggins had the better day putting, going 100% inside the circle, while Korver avoided anything worse-than-bogey and had fewer penalty strokes. Each possesses the control-based game that scores at Blue Lake.

A foursome tied at 1-under makes up the chase card for the last round at Blue Lake before the field heads to the course at Glendoveer. Catrina Allen, Vanessa Van Dyken, Lykke Lorentzen and Natalie Ryan will attempt to move up, even as the rain threatens to come down on Friday and into the weekend.

When Isaac Robinson began his day par-par, that proved to be a “slow start” by comparison. Although he would experience another mundane par-par sequence at holes six and seven – the sarcasm is intentionally thick – Robinson would liven things up thanks to zero bogeys and twelve birdies on the round. Just two weeks ago Robinson received a college degree in his home state of Georgia. In round one, he majored in dominance in Oregon. It wasn’t just the perfect 100% C1X putting that worked for Robinson, it was the fact he only needed one putt further than 16 feet for the round. Backing up a hot round with another is a tall order, but Robinson will need to do that because of the crowded leaderboard just behind him.

Simon Lizotte is in the midst of what may be his longest roadtrip away from his young family. In the two weeks since winning the OTB Open, Lizotte has stayed busy with off-course responsibilities, but has not lost the edge in his newer, more controlled style. His 11-under round places him alone in second.

It’s been a while since Garrett Gurthie has found himself among the tournament leaders – an admission he made himself just after his second C2 putt in-a-row fell for a second birdie in-a-row to cap off a 10-under-par round. Gurthie felt his putting overall was key in a round where he had to hold his distance off-the-tee in check to stay in-bounds at Blue Lake.

Joel Freeman scrambled flawlessly, overcoming three O.B. penalty strokes in a bogey-free, 9-under round. He’s by himself in fourth position.

The day 2 chase card will feature Albert Tamm, the Estonian, who has been a visible member of the European contingency on the pro tour in 2022, but has struggled to turn good rounds into good finishes outside of his victory at the Open at Tallahassee, a Silver Series event. Tamm is T5 with Paul McBeth, who more recently has experienced some of the same trouble and seeks to put multiple good rounds together in Portland. McBeth’s three closing birdies give him an 8-under-par tally for the event.

Also tied for fifth, Noah Fiveash is seeking his first finish better than 40th in an Elite Series event in 2022.

James Proctor rounds out the chase card, getting the nod over several others tied at 7-under (Gannon Buhr, Kyle Klein, and Ezra Aderhold) thanks to his lower PDGA number.

Coverage of round 2 at the 2022 Portland Open resumes Friday from Blue Lake Regional Park with FPO action beginning at 9 a.m. PT on the Disc Golf Network.