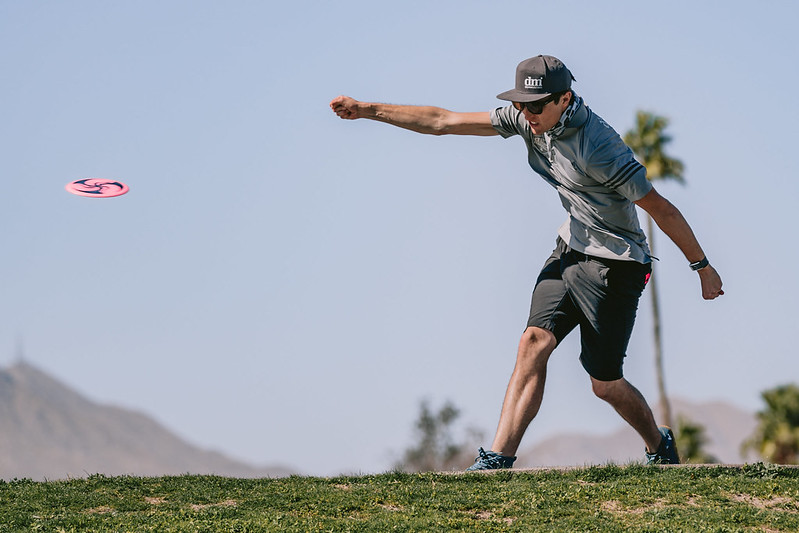 It was moving day in Vegas, and new leaders sit atop the leaderboard in both the men’s and women’s fields. Eagle McMahon has a one-stroke lead, and Paige Pierce has a three-stroke lead heading into Sunday’s final round.

Ezra Aderhold came into the day with a two-stroke lead, but after Calvin Heimburg birdied the first two holes, Heimburg had it knotted up by the end of hole two. Aderhold bounced back with a birdie on three and held the lead for the rest of the front nine.

The tide started to turn on the back nine. As Aderhold began to fade, Calvin Heimburg and Eagle McMahon pressed the pedal to the metal. Heimburg birdied hole ten before knocking in a 60-foot putt for eagle on the par-four, hole 11. Heimburg finished his back nine with three more birdies to finish his round at 10-under, 51 for a tournament total of 34-under. He sits in second place, one stroke behind Eagle McMahon.

McMahon caught fire on the back nine, going 10-under through the final nine holes, including an impressive eagle on the par-five hole 12. Eagles finished his round at 12-under and is the tournament leader at 35-under.

Eagle with a sick roller/forehand/tap-in eagle!

McMahon picks up four strokes in three holes, now tied for the lead with Heimburg.#quickhits pic.twitter.com/qNaUwFlrp4

Paul McBeth will stay on the lead card for Sunday’s final round after shooting a 7-under, 54. McBeth had several opportunities from circle two, but only made 3 of 11 for a 27% clip. His tournament total of 31-under will be four strokes behind the leader.

Ricky Wysocki will round out the lead card with a tournament total of 29-under after a 9-under, 52 round. Aderhold finished his round at 3-under and is tied with Wysocki for fourth place but will be on the chase card for Sunday’s final round.

The two-person race continued in the women’s field. In round three, it was Paige Pierce getting the better of Catrina Allen. The turning point came on the 363-foot, par three hole 13. Pierce had made up ground through the first 12 holes and cut Allen’s lead to just one. On the 13th, Allen found out-of-bounds and took a bogey four while Pierce put her drive inside circle one and canned the putt. The two-stroke swing allowed Pierce to take the lead.

From there, Pierce was able to add to her lead with a birdie on 14. The two competitors matched each other stroke for stroke on holes 15, 16, and 17. On the 18th, Catrina Allen birdied the 632-foot par five, but Pierce did her one better to score the eagle.

2 of the 3 eagles today on hole 18 from the lead card, Paige Pierce and Jennifer Allen with the big drives and aggressive upshots. Pierce the leader going into tomorrow's final round.#quickhits pic.twitter.com/cvd7uLXcdg

Jessica Weese will join the lead card and sits in third place after a 1-under round put her 3-under for the tournament, and Ohn Scoggins will round out the lead card after shooting a 4-over round to bring her tournament total to 2-under to drop her into fourth place.