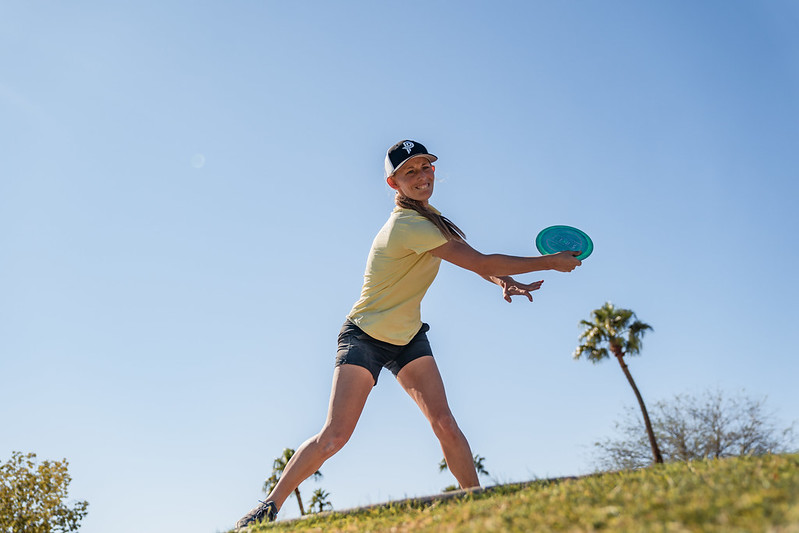 LVC Round One Recap

By Baker HeltonFebruary 25, 2021No Comments

There were some familiar names on top of the leaderboard following round one of the Las Vegas Challenge presented by Innova. After a windy day, Calvin Heimburg holds a one-stroke lead in the tightly packed men’s division, and Paige Pierce has a four stroke lead over the women’s field.

The featured men’s group saw familiar faces working their way to the top of the leaderboard. Calvin Heimburg leads the tournament after shooting a 12-under, 47. Heimburg started his day with a double-bogey but bounced back to card 14 birdies, including the last five holes.

Heimburg starts out with a double bogey on hole 1 but blasts back, taking 14 of the next 17 birdies and is the Round 1 leader at the Las Vegas Championship.

Paul McBeth shot 11-under par to finish the day in a tie for second place. McBeth started with three straight birdies and eagled the triple island, hole six in route to a 7-under front nine. He cooled off on the back nine, including a bogey on 15, but birdies on 16 and 18 allowed him to be just one stroke out of the lead going into the second day.

Eagles McMahon had the opportunity to set the pace early for the rest of the field. McMahon teed off at 8:04 local time and set the mark for the rest of the competitors to chase, shooting a 10-under, 54. Eagle started his round with three straight birdies and added streaks of four straight on holes 6-9 and 15-18. McMahon’s only blemish of the day came on the 430-foot, hole 11 in which he went out of bounds and bogeyed.

Sharing a card with McMahon, Brodie Smith proved his ability to compete on tour. Smith’s day started rough, bogeying hole one, but he went on to secure eight birdies the rest of the way to finish 7-under and in a tie for 16th place.

What a way to open the season! @Brodiesmith21 is in the clubhouse with a -7.#quickhits pic.twitter.com/hmCCgzrwfb

Ezra Aderhold also got off to a fast start to help set the pace for the field.

He is tied with three other players, James Conrad, Ricky Wysocki, and Garrett Gurthie, in fourth place at 10-under. Gurthie will get the bid for the lead card with the lowest PDGA number.

There were two aces on the day. Cale Leiviska started his tournament with a bang, aceing hole 1, and Vincent Polidori aced his final hole of the day, hole 18.

Paige Pierce separated herself from the field, shooting a scorching 10-under, 52.

Too easy for Paige Pierce.

Pierce is the FPO leader at -9 after 15.#quickhits pic.twitter.com/gNZGUZ0hcU

Her success was in large part due to her ability to stay in bounds. With strong winds, many competitors struggled to keep their discs in bounds and out of the hazard areas, but Pierce had zero OB strokes on the day. The only blemish on Paige’s record was her work on the green, as she was 50% on C1x putts in an otherwise stellar round. Pierce had a streak of six straight birdies on the back nine, getting holes 11-16. Overall, Pierce had ten birdies and no bogeys on the day.

Catrina Allen is four strokes behind Pierce after shooting a 6-under, 56. Allen had a clean scorecard through the first 12 holes, carding six birdies and zero bogeys before bogeying hole 13. She was able to bounce back and carded zero bogeys along with one birdie the rest of the way.

Jessica Weese sits in third place at 4-under par. Weese finished the day with a Circle 1 in Regulation rate of 50%, the third-best in the field.

Jennifer Allen rounds out the lead card after a roller coaster of a day. Her day was epitomized by holes eight and nine. Allen went out of bounds twice on the 725-foot par five and carded a double bogey. On the next hole, a 597-foot par four, Allen scored an eagle with a 200-foot throw-in. She finished 3-under, 59 with an eagle, five birdies, two bogeys, and one double bogey.