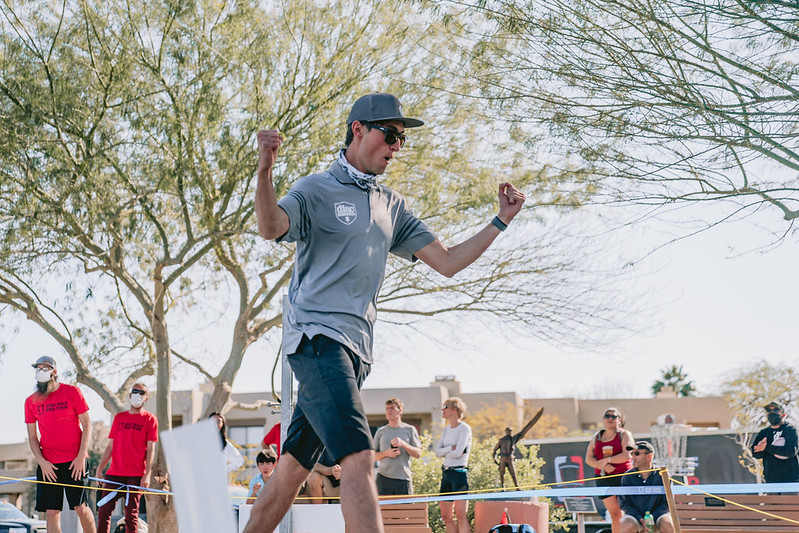 Two champions were crowned on Sunday at the Las Vegas Challenge presented by Innova. On a gusty day in Vegas, Eagle McMahon won convincingly in MPO while Paige Pierce won FPO in dramatic fashion.

Eagle McMahon showed he was the class of the field in Sunday’s round. McMahon went into Sunday with a one-stroke lead over Calvin Heimburg, but going into the fourth hole, Eagle had already extended his lead to three after birding the first three holes. On hole four, Heimburg bogeyed, and Eagle birdied to extend his lead to five. The rest of McMahon’s round served as a victory lap. Eagle shot the hot round of the day, finishing at 13-under, 49 to bring his tournament total to 48-under, an eight-stroke victory.

McMahon’s prowess from the tee box was a major factor in his tournament victory as he led the field in Fairway Hits, Parked %, Circle 1 in Regulation, Circle 2 in Regulation, and Birdie %. He was also successful in his short game, finishing in the top ten in Scramble %, Circle 1 Putting, and Circle 2 Putting.

The victory is his second at the Las Vegas Challenge, as he previously won the 2018 edition of the tournament.

Calvin Heimburg finished in a tie for second after shooting a 6-under, 51 for a tournament total of 40-under. Ezra Aderhold came off the chase card to tie Heimburg for second place with an impressive 11-under, 51 round.

In FPO, the battle between Paige Pierce and Catrina Allen came down to the final hole. Pierce entered the day with a three-stroke lead over Allen and held onto that margin for most of the front nine. On hole nine, the tournament began to tighten. The tricky 601-foot, par four hole saw Paige go out of bounds on her approach before making matters worse by three-putting. Pierce’s mistakes led to a double-bogey, and a par by Allen cut the deficit to just one stroke.

The action see-sawed back and forth for the next several holes, and the score was still only separated by one going into 17. It appeared that would be the deficit going into the final hole, but Catrina Allen missed a 15-foot putt to extend Pierce’s lead to two.

The dramatics were far from over, however, as the two competitors tackled the final hole. On the par-five, 18th, both Pierce and Allen landed their drives in bounds. Pierce’s second shot went out-of-bounds, which appeared to open a door for Allen. The door seemed to quickly slam shut on Allen as she faltered on her second shot, also throwing out-of-bounds. On the next shot, Paige Pierce did the unthinkable and went out-of-bounds for a second time. This second mistake left her with a 20-foot, uphill straddle putt that she needed to make to prevent Allen from forcing overtime with a make. Pierce stepped up and nailed the putt to secure her fourth Las Vegas Challenge title.