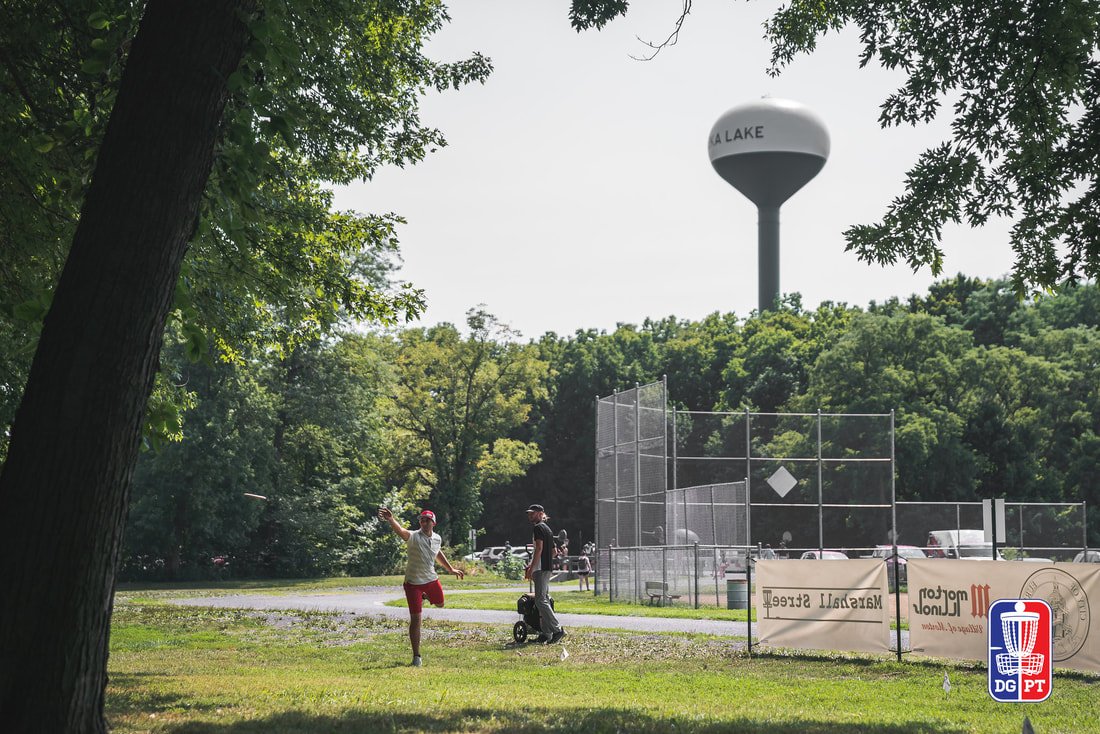 Discraft’s Ledgestone Insurance Open: A Worlds Preview for the Ages

In disc golf, it is not uncommon for there to be a Worlds preview event on the courses where the World Championships will take place in the current year. What is out of character is for the event to be an Elite Tour stop less than two months before Worlds. While both divisions will not be playing all of the courses used for Worlds, two of the three courses will be on display at this weekend’s events.

The Ledgestone Insurance Open will feature the Lake Eureka Temp course for the MPO division and Sunset Hills for the FPO division. Missing from the rotation is the storied Northwoods course which has undergone a significant upgrade in preparation for Worlds. While the men have not played at Northwoods for Ledgestone since 2016, the course has been in the rotation for the women until this year. Look for the absence of Northwoods to be a factor in who could bring home the win in the FPO division this year. Additionally, you might not want to stake your bets on who will win World’s based on this event alone, but this event will serve as a barometer for players who are eying a World Title.

To talk about the courses that will be in play at Ledgestone, let’s first take a look at Sunset Hills. Sunset Hills is on a golf course in Pekin, IL. The Sunset track has been relatively set for the past two years except holes one and two which were lengthened and shortened respectively to help adjust for scoring. The Sunset Hills course has proven to be challenging and a test of competitiveness for the women. It has created both scoring separation and good scores and even boasts a playoff in 2017 that went four holes before Valarie Jenkins was crowned as the winner.

On the MPO side, we have the Lake Eureka temp course. The Lake Eureka temp course has seen its share of frustration from the players, while also being adjusted to create a Worlds level course over the years. This year no changes were slotted for the course, but one late adjustment came this past weekend as an unseasonably large amount of rain led to moving the basket placement on hole nine. The basket was moved to the left to avoid standing water on the course. This change will create a unique spin on the hole as players will look to play a hyzer across the bridge instead of a straight throw to try and make the island. While this is a minor change, it could be all that it takes for a new player to rise to the top in the MPO field.

What we can expect from previous years

Let’s start by looking at the MPO side. On the MPO side, Paul McBeth or Josh Anthon could bring home their second Ledgestone Insurance Open title; however, Nate Sexton will not be here to defend last year’s victory. While one should never count Paul McBeth out, Paul has not played an Elite Series event since May 17-19th when he played the Master’s Cup and finished in a tie for 6th place. With almost a month away from the tour, it will be interesting to see if Paul returns to win or if he has some rust to shake off. Josh Anthon is another curious case. Josh clearly has what it takes to win. When he won in 2017, he won by ten throws over defending champion Paul McBeth (who had won in 2016 by twelve throws).

Other players to watch in the MPO division include Chris Dickerson who came in second last year after having a chance to tie Nate Sexton on the final hole of competition ( before a nasty roll OB on his upshot to the green ). Eagle McMahon is another player to watch for as he has not played Ledgestone since 2015, the year before it was on the Pro Tour when he finished in a tie for 66th place. Before dropping an event, Eagle McMahon leads the Pro Tour standings and also leads in National Tour Points as well. Eagle’s current play gives him a chance to improve his previous finish at this event significantly and potentially be in the running to be crowned the Champion.  Finally, Cameron Colglazier is a player you should not count out. He has finished top six at Ledgestone every year since 2015 and could be looking for his first Ledgestone Open victory.

On the women’s side, Jessica Weese and Catrina Allen are the heavy favorites for the event. The past two years Jessica has either won or gone to a playoff at the event. Catrina had won Ledgestone for the four years before Jessica’s rise to the top. Both players are looking to focus on Ledgestone as an event, taking a step-by-step mentality and then will be looking to Worlds in August after a few more stops on tour are behind them.

Other players to watch include Sarah Hokom and the Paiges. Sarah Hokom came within two last year and has finished in the top five for the past three years. Paige Bjerkaas played Ledgestone for the first time last year but threw one off the hot round on the first day to stay on the lead card across all three subsequent rounds. Finally, Paige Pierce has finished top five at Ledgestone all three years that it has been on the Pro Tour and with a solid game plan could be looking to bring home her first Ledgestone Open victory this weekend as she prepares for Worlds.

A significant thing to consider with the FPO division is the removal of Northwoods from play this year. When you take a look at who has had some of their best rounds at Sunset Hills the list not only includes the five players mentioned before but two other players as well: Missy Gannon and Hailey King. Both players could benefit from playing Sunset Hills exclusively, and it would not be surprising to see either one of them make it onto the lead card (or possibly be in contention) this weekend.

What the players are saying

We caught up with Tour Standings leader Paul McBeth and last year’s runner-up Chris Dickerson to see how they are preparing for the event considering it is barely two months before the World Championships.

Chris Dickerson
PRO TOUR: Are you viewing Ledgestone as a warm-up for Worlds or as an Elite Series Pro Tour event?
CD: Both, I’m going into this event like any other event. I don’t see it as if I do good here, that’s great, if I don’t I have another chance at it. It’s its own event, so I feel like I need to do the best at both.

PRO TOUR: With Nate Sexton not being here would you presume that you would walk away and win easy?
CD: Weekend to weekend it’s anybody’s game. I didn’t even know he wasn’t going to be here this weekend.

We also took the time to talk with defending champion Jessica Weese, 4x Ledgestone Champion Catrina Allen, and Tour Points Leader Paige Pierce to see how they are approaching the Ledgestone this week.

Jessica Weese
PRO TOUR: Are you viewing Ledgestone as a warm-up for Worlds or as an Elite Series Pro Tour event?
JW: Ledgestone is its own complete entity. It’s very unusual that we get to play the course we are playing for Worlds before Worlds. In the past, when we had it in Portland, we didn’t play Blue Lake or Milo, they actually canceled the Beaver State Fling. It’s not often that we get to practice it before the World Championship. I feel like Ledgestone is such a big tournament that it has earned its own tournament title.

PRO TOUR: As the defending Ledgestone Champion. How do you feel coming into this year with the tournament going to one course and that course being Sunset?
JW: I don’t feel like it will affect my chances at repeating. I focus on one hole at a time. I like to think about what it would be like to be the Champion at the end of the week, but sometimes it is important to focus on playing one hole at a time.

PRO TOUR: Any other thoughts that you have about the event?
JW: I hope that with the event being at Sunset, there will be more people out watching the event. Northwood is hard to get a gallery at, and I think being at one course will make that easier.

PRO TOUR: How do you feel about your odds about getting back to the top of the podium and getting your fifth Ledgestone win?
CA: I’ve been playing good all year and when I lose its been close. I feel good.

PRO TOUR: Do you think about winning this for the fifth time, does that hit you at all as being significant for you as a player?
CA: I think of it more because it’s fun to play this tournament. The first time I played, it was just an A-Tier. As it grows bigger and bigger, it becomes a bigger deal to win it. I don’t think about it as much as a legacy; I just want to win it every year. Playing it the first time, I remember Nate being so available and so organized and the payout was good, and the courses were ready. I came back the next year because of how Nate ran it. In 2014, I sent him feedback after the event, and we built a friendship from that it has been good.

Paige Pierce
PRO TOUR: Are you viewing Ledgestone as a warm-up for Worlds or as an Elite Series Pro Tour event?
PP: [Ledgestone is…] definitely a chance to get some good competition rounds in to practice for Worlds. Honestly, every round I play at any event is practice for Worlds though. This one will show me if my game plan I develop for Ledgestone is sufficient or if I need to adjust somethings and attack any holes differently.

Both Paul and Chris are looking at the event as both a warm-up for Worlds and an opportunity to win an Elite Series event. On the FPO side, the players are playing things an event at the time. For the viewers it is a chance to see who you may think could win Worlds this year and we hope you are looking forward to watching starting Friday at 10:30 AM ET for the women and 4:30 PM ET for the men . The live women’s card will include last year’s champion Jessica Weese, event runner-up Sarah Hokom, sponsor choice Vanessa Van Dyken, and Fan Vote winner Kacie Glade. The live men’s card will feature last year’s runner-up Chris Dickerson, Tour Points leader Eagle McMahon, sponsor choice Brian Earhart, and Fan Vote winner Gary Patton. Make plans to tune in and watch!