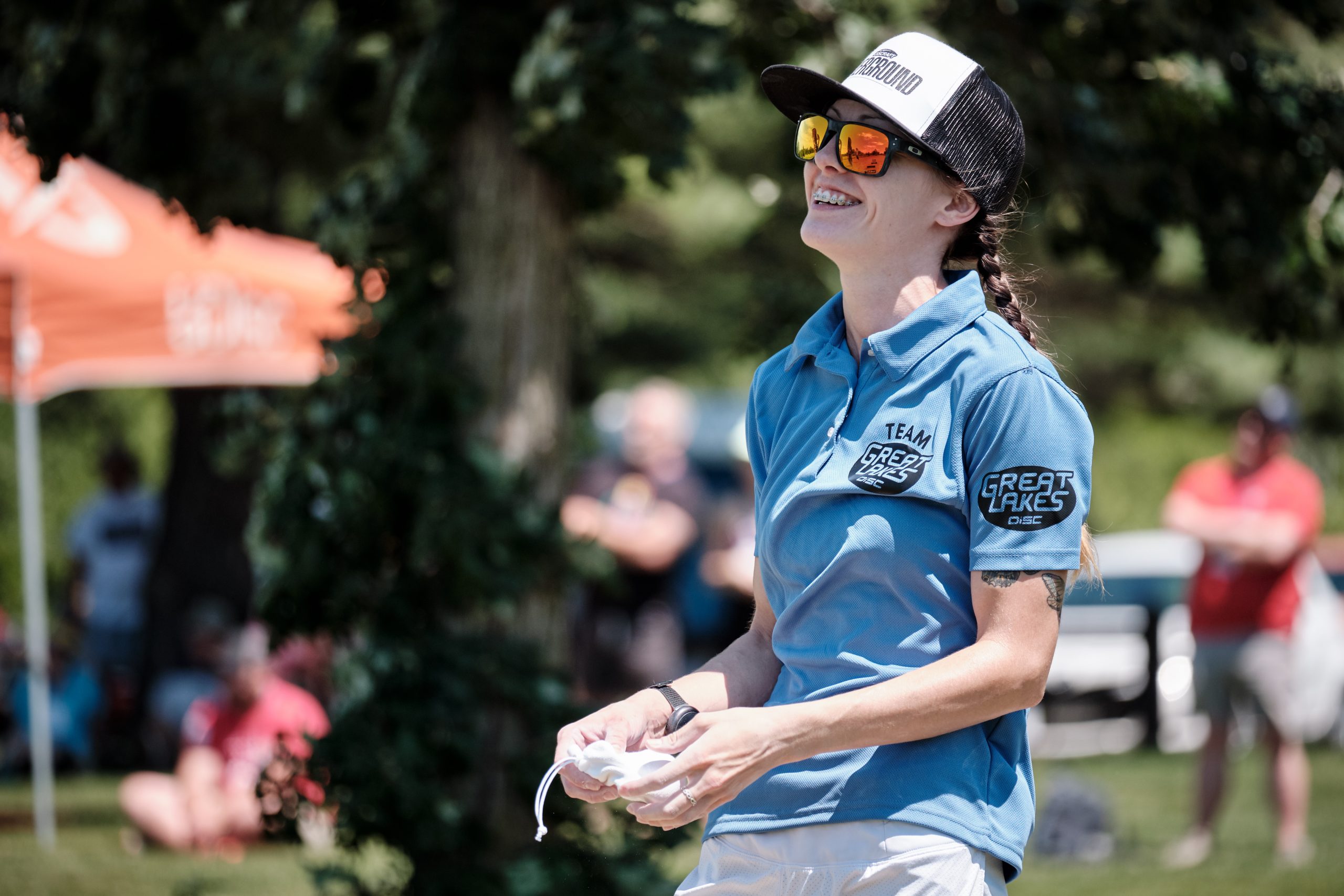 Laughes, Nerves and Plenty of Disc Golf at USWDGC

Standing near the first tee of the 2022 United States Women’s Disc Golf Championship, there were hugs, laughs, nerves, and plenty of stories shared.

“Remember that one time we got in trouble?” one competitor said. “We were being a little too loud, but we were having fun.”

Community is a big part of the USWDGC, which is underway in Madison, Wisconsin and includes a record 318 players in its 24th running.

But don’t get this twisted, the competition is fierce and a PDGA Major is on the line.

Virginia Polkinghorne was in Madison six years ago for PDGA Junior Worlds and is now back to compete in her first USWDGC.

It was a good start for the 13-year-old, who finished her hot round in Advanced and then stuck around to watch her mom compete.

“Seeing how I’m playing these courses compared to back then is really cool,” said Polkinghorne, who leads FA1 by one stroke. “Being around so many women and being in such a large field of women is amazing to see.”

Polkinghorne has been playing for nine years and said she relied on her straight shots off the tee as well as her anhyzer game to jump to an early lead of this four-round event. She played Elver Park, the tighter of the two tracks, relatively clean with 15 pars on the day and just two bogies, the lowest in the field.

But the competition is tight.

Alexis Kerman, Ashley Pickett and Emily Yale are just one stroke back and four others are within four strokes heading into round two.

Over at Token Creek, the scoreboard is stacked, the sprint through the course is on and Eveliina Salonen has set the early pace.

Salonen fired off a bogey-free, 1003-rated round as the FPO field battled the swirling winds and felt the pressure to birdie at every opportunity.

Maria Oliva is in a three-way tie for second in FPO. Photo: Kevin Huver / DGN

The lead for Salonen, who is first in Circle 1 in regulation (56%) and second in strokes gained tee-to-green (7.29) according to UDisc, is slim.

Ohn Scoggins, Maria Oliva and Hailey King are right there, just one stroke back at 8-under. Three more players — Emily Beach, Missy Gannon and Aria Castruita — are within two strokes. Catrina Allen will round out the chase card at 6-under par.

Erin Fitzpatrick circled these few weeks on the calendar when the schedule was released.

Making the trip up from Florida, Fitzpatrick is competing this week in Wisconsin and then will head down to Peoria, Illinios for the PDGA Masters World Championships, which begin in under two weeks.

The trip is off to a great start for Fitzpatrick, who leads the FA50 field by three strokes in her third trip to the USWDGC.

“It’s great getting to meet all of the new ladies that I get to play with, to see some great courses around the country and to support the local community that host these events,” Fitzpatrick said. “We saw the schedule and knew that we were hitting the road.”

Fitzpatrick has a three-stroke lead over Toni Morgan.

Melodie Bailey is two strokes behind Jennifer Allen in FP40 after the first round. Photo: Conrad Meyer / PDGA