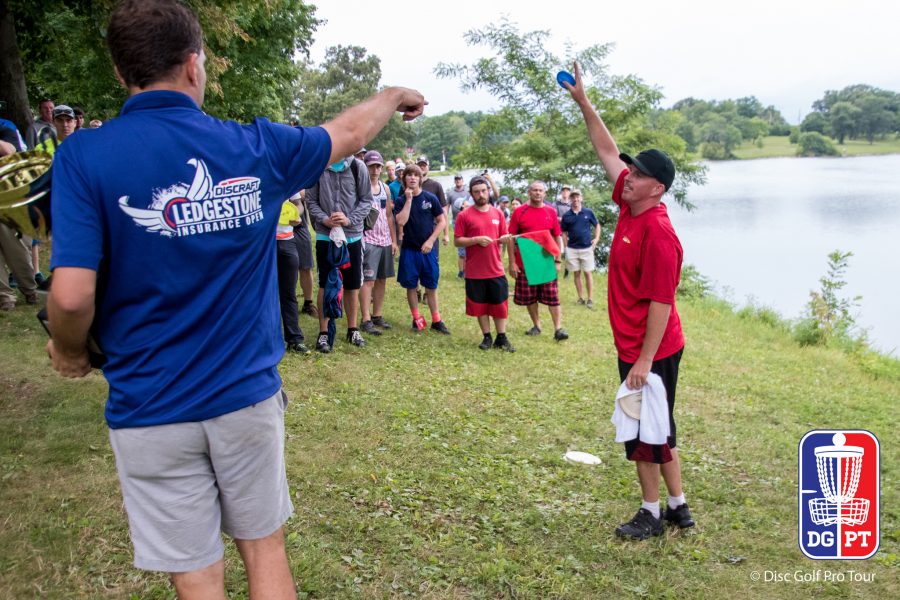 The Final round of the Ledgestone Insurance Open presented by Discraft may have looked like a victory lap for Josh Anthon but much more was at stake. Along with
winning the title, three other competitors are either tied or within one stroke of each other. Not to mention that DGPT points that will be vital as the second half of the season progresses. One of the biggest factors is pride. Most of these high level pros have a hunger to win and even if they can’t, they want to sleep easy at night knowing they gave it their all. At the start of the final round, Josh Anthon was leading by nine strokes with -26 and both Paul McBeth and Paul Ulibarri were tied at -17 and only one stroke away was Ricky Wysocki with -16.
Ricky WysockiRicky Wysocki really played hard this weekend. If he played flawless golf I wonder if might have had a chance against Josh Anthon. Unfortunately, we will never know. Ricky struggles through the front nine on the Eureka (temp) course carding four bogeys and five total for the final round. No matter how you slice it, that’s no way to make a run for a title. On any given day Wysocki will shoot lights out. But it will be interesting to see the Ricky-Anthon match up in the future. Ricky took Utah and now Anthon took Ledgestone. Are we seeing the birth of a rivalry? Ricky finished the tournament with a -20 in fourth place.
Paul UlibarriPaul Ulibarri has given the fans a great show this week. Not all of his rounds have gone as planned but he’s rolled with the punches and kept his composure even when times got rough. Lesser players would have folded under the pressure and self-doubt but Paul is not that kind of player. Paul had a few blemishes on his card today but he played clean and that secured him second place with a score of -22 for the tournament.
Paul McBethIt’s always a strange week when the focus of conversation is not on Paul McBeth. He is the premiere player in the sport of disc golf and for the past two seasons, he has had the recipe for winning tucked secretly into his golf bag. This season, however, there is a new wind blowing and great players are stepping up to challenge the dynamic duo of Paul and Ricky. That may not be the best news for Paul and Ricky, but this is great news for the fans across the world. But what Paul did was play superb disc golf. There were a few holes I’m sure he’d like to get back, but he is human after all and I would wager that Paul would have won any other tournament across the country this week except the Ledgestone. Paul finished with a -23 and in second place.
Josh AnthonJosh Anthon was a man on fire every single round of the 2017 Ledgestone Insurance Open presented by Discraft. If there was something to say about Josh’s performance it would inspiring. Josh was a man away from the scene and some wondered if he would come back to the game and live up to his former self and his former player rating. He did that and more. What more can I add? How about 100% percent scramble rate, 84 fairway hits, and an 84% circle 1 putting percentage. Josh won the Ledgestone by an astounding ten strokes over Paul McBeth and finished with a score of -33.
Finishing StrongHe was not mentioned much this week but Nate Doss did what he has always done, finished strong. His final score was -18 an impressive number. Another name that needed to be written was Cale Leiviska, Cale moved up 12 spots and shot the hot round of the day with a -10 to give him a tournament total of -15 and put him in ninth place. Another notable spot jumper was Austin Turner moving up 15 spots. Although it was a bit anticlimactic, Josh Anthon is the winner of the 2017 Ledgestone Insurance Open presented by Discraft. He earned every stroke and put on a great show for the fans. On behalf of Nate Heinold, and the DGPT staff, a congratulations go out to Josh Anthon for an amazing victory.