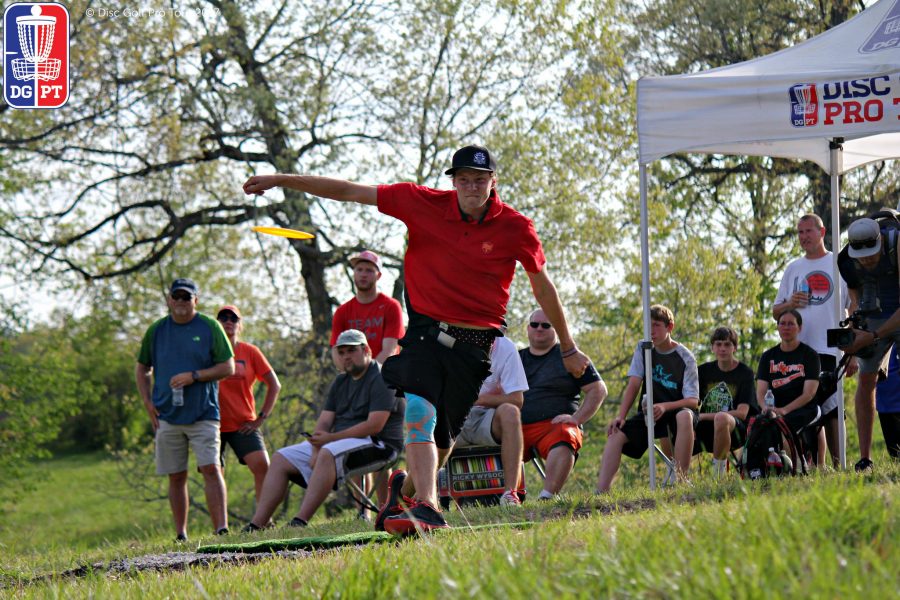 Jonesboro Open MPO Round One: Close Pack at the Top

The Spartan Mowers / R&R Equipment Jonesboro Open presented by Prodiscus continued Thursday afternoon with the men kicking off their fourth event on ​
the Disc Golf Pro Tour. It was no surprise that the big names rose to the top on day one, but there were also some surprise names that snuck up to the top of the leaderboard. When the dust settled, it was Ricky Wysocki who shot a 13-under par, 51, to take the early two stroke lead. Wysocki was followed by Jeremy Koling (-11) and five different names at 10-under par, 54.
Wysocki rolled off three birdies and an eagle on the course’s final four holes to jump out to the early lead. Ricky recapped his round, “I knew this was a long course and it’s all about finishing here… I knew I had to finish strong.”
Ricky talked about what his approach was on this Disc Side of Heaven course, “My game plan is semi-aggressive to where I shouldn’t be taking any big numbers. I set it up to where I can be pretty consistent and shoot the scores that I shoot consistently. I started off with a good round and now it’s all just capitalizing, and bearing down, and focusing on my game plan the rest of the weekend.”
Wysocki overtook Jeremy Koling who was leading most of the round. Koling rattled off seven straight birdies on holes two through eight to garner the early lead. Koling cooled off a little bit on the back nine, but still held the lead going into the final hole of the day. On 18, Koling missed a Circle 1 putt to take a bogey and hand off the lead after a Wysocki birdie.
After Ricky and Jeremy, there is a log jam with five different golfers for third place. Simon Lizotte, JohnE McCray, Matt Dollar, Lewis Britney, and Tim Barham all shot a 10-under par, 54.
Lizotte recapped day one. “I’m glad to be out here, beautiful place. I’m happy with the way I play, just one stupid mistake but the rest is good.”
The mistake Simon is talking about is the semi-island hole, five. Simon went aggressive to try and the reach the green but was knocked down, out of bounds by a tree. “I am going to lay up tomorrow,” Lizotte quipped.
Lewis Bitney, who had a good finish at last week’s Texas State, was excited about his round. “Try to keep it in the fairway, keep it straight, make the putts, get up and down.” He credited his putting for his success. He was 100% in Circle 2 and 88% in Circle 1.
Matt Dollar credited his preparation for his success. “I started playing the holes one way early during the week and by now, after four or five practice rounds, I have the placements figured out.”
Wysocki, Koling, and the slew of players at 10-under, will look to make a push as the tournament moves to the second round on Friday. Tune in to UDiscLive for live scoring as well as the Smashboxx broadcast tomorrow at 3:00 PM central.