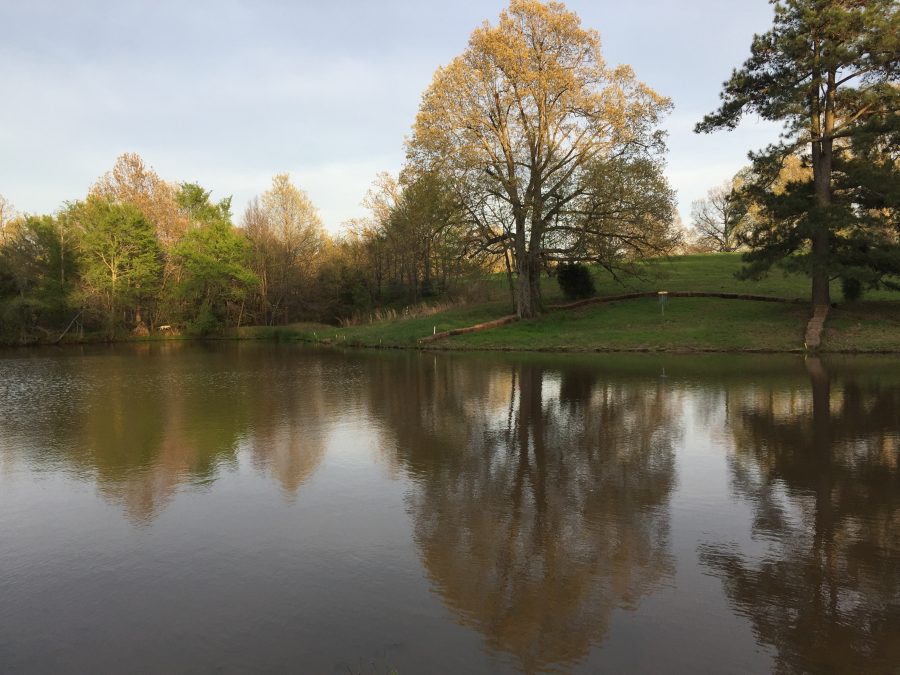 Spartan Mowers, R&R Farm Equipment, and Disc Side of HeavenThe Disc Golf Pro Tour continues this week with The Spartan Mowers / R&R Farm Equipment ​
Jonesboro Open presented by Prodiscus. This week the female pros will be challenged by the Championship Course at Disc Side of Heaven, originally created by Brad Pietz, the event’s tournament Director. With every stop on The Disc Golf Pro Tour, the competition has been outstanding and the courses have been uncompromising, with this event being no exception. What’s the best way to raise the stakes? Add water!
This course was designed with the pro disc golfer in mind, testing their resolve not only with out-of-bounds to navigate, but also ponds, creeks, and marshes to avoid at every turn. I asked Brad Pietz what advice he could offer competitors attempting to prove themselves on his course and he remarked that, “Almost every shot is a blind shot.  Between the hills and the massive trees, you have to work your way around the course from landing zone to landing zone.  It is mostly open, but if you get into or under one of these trees, you are going to have a hard time getting out.” If a pro holds out any hope of defeating this piece of heaven, they will be expected to master the art of course management and playing for position. This course will take risk/reward to a whole new level.
With the Disc Golf Tour in full swing players are coming to the realization that “points matter” and if they don’t play every DGPT event they may find themselves falling behind the rest of the field throughout the season. With the Tour Championship season finale on the line there is pride, recognition, and lots of money up for grabs. You can’t earn the points if you don’t play!
A player that will feel right at home at Disc Side of Heaven is Paige Pierce. Her crazy long drives along with deadly accurate up shots might propel her to the top of the leaderboard. There are no shortages of players with good drives, but not many can deploy one with the power and beauty that Paige can pull off. Paige’s 275 Tour Points currently leads the pack.

If she can navigate across the water and avoid the out-of-bounds, she will be the fan’s delight as they watch this talented woman carve up the course. If she plays her game and can ignore the rest of the players, she could find her way to victory lane.
Paige Pierce Tour Rank and Points

Sarah Hokom is arguably one of the best forehand disc golfers in the world, man or woman, and with a fire that will not let up. Sarah has all the tools to take the Championship Course at Disc Side of Heaven apart. There is no doubt that Sarah has all the shots, can execute all the lines, and when her putter is warm, knock down some long putts. So far on The Disc Golf Pro Tour Sarah has racked up an impressive (262.5) points, placing her in second, just behind Paige Pierce.

I asked Sarah if points were important to her and she said in a very Sarah way that, “I try to do my best at everything, including the DGPT points.” Sarah is fun to watch and even more fun to talk to and she says what’s on her mind. This week at JBO Sarah will get her chance to compete with some of the best female disc golfers in the world on one of the toughest courses around. Sarah has played some solid disc golf this season getting a win at Nick Hyde and finishing second at the other two DGPT Tournaments. I wanted to know if she thought she is playing on a whole new level and she was quick to remind me that, “I just try to keep getting a little better all the time. I’ve been climbing a long time, maybe people are just now noticing because of increased media coverage.” It’s hard to argue with a World Champion that has over sixty career wins and counting. With the high visibility that the DGPT provides, Sarah is shining bright in the spotlight.
Sarah Hokom’s Rank and Points

When matching the challenges of the course with the attributes of a player, one contender that comes to mind is Jennifer Allen, the female world distance record holder. 569 feet in case you were wondering. Her powerful backhands are a good recipe for a course that demands accuracy but also some distance to get beyond some obstacles. I asked her how she planned to attack the course, aggressively or conservatively and she admitted that, “I try to always start with a solid round. Play smart and post a good score to get going.”  Jennifer has 180 Tour Points on the DGPT.

If she has a great showing at JBO, she may have a chance to leap frog Catrina Allen (228 Points), who is taking the week off, and earn a bye to the semifinals. With a fourth place finish at Nick Hyde, Jennifer Allen is in a good position to add a victory at JBO to her resume if she can keep her discs between the lines.
Jennifer Allen’s Rank and Points

When someone says the name Madison Walker you can’t help but smile. She carries with her the exuberance of youth with all the fun-loving attitude that one person could own. She possesses one of the most accurate forehand shots in the business and now added a new backhand game to become a more rounded player. Above all, Madison has put together some impressive rounds most notably a scorching second round at the 2017 Memorial. I asked Madison if she thought the DGPT benefited women’s disc golf and she replied, “I believe it has already taken strides to improve women’s disc golf. I think the equitable distribution of added cash and the availability of women’s video coverage and statistics is awesome. The more exposure we have, the more we grow ladies’ disc golf!” If she can stay out of trouble at the JBO, Madison Walker could take the next step in her career by claiming a win at the fourth event of The Disc Golf Pro Tour in Jonesboro, Arkansas.
With so many high level players like Lisa Fajkus , Jessica Weese, and the legend Des Reading making the trip to Jonesboro, Arkansas, the battle to finish first will not be an easy road. It seems that a great many competitors in the FPO division are playing the very best disc golf of their careers this year. I can honestly say that this is anyone’s tournament to win and I can’t wait to see these amazing women throw some amazing shots. The player who can out-think the course and stay one step ahead of the field will count themselves as champion at The Spartan Mowers / R&R Farm Equipment Jonesboro Open presented by Prodiscus. The action will begin Thursday April 13th.
Live coverage begins on Friday the 14th: