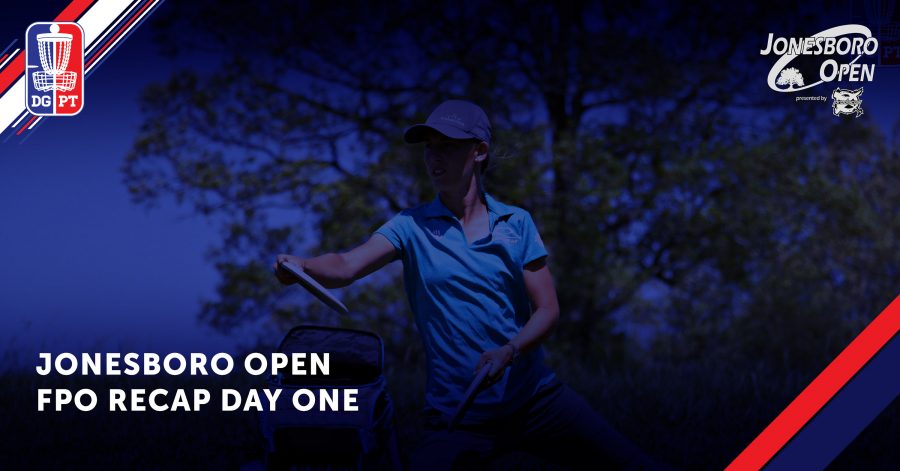 Jonesboro FPO Round One Recap: Who will catch Paige Pierce?

Under cloudy skies the FPO division took on the first round of the Jonesboro Open presented by Prodiscus. With fifteen competitors in the division the top card after day
one was going to see some stiff competition. At the end of the day, Paige Pierce came in with the hot round today carding a -12 on the par 66 course. With one bogey on hole one Paige has set the pace early. The only question now: who will catch her?
On the feature card today was Sarah Hokom, Jennifer Allen, Jessica Weese, and Kona Star Panis. Traditionally last years winner would have been on the feature card, however, Paige Pierce entered the field after the cards had been decided so she ended up on an earlier card this morning.
On the feature card Jennifer Allen started off hot carding three birdies on the first three holes. On holes one and eight Jennifer was parked for the birdie. Down the stretch, Jennifer Allen cooled off, which allowed card mate Kona Star Panis to use her consistent play and an eagle on hole nine to move ahead of Jennifer Allen. Kona was the fan vote winner for the FPO division and she proved why she deserved the spot on the feature card day one. Kona was in a position to finish the day tied for second however, after a rough double bogey on hole eighteen Kona and Jennifer will be heading up the chase card in the FPO division for round two here at the Jonesboro Open presented by Prodiscus.
On another separate card, Catrina Allen and Madison Walker fought to stay under par and succeeded. They will be playing on the lead card tomorrow. Catrina would have finished the day in second place had she not carded back-to-back bogey and double bogey on holes fifteen and sixteen. Ultimately she finished the day four under par. Madison Walker started off the front nine even, carding two birdies and two bogeys. She turned it on on the back nine where her only bogey (hole 10) was offset by six birdies. This moved Madison into second place, seven throws behind Paige Pierce. Catrina finished the day tied for third with last year’s Jonesboro Open runner up Sarah Hokom. Sarah played a -5 back nine to finish the day down four but -8 back on Paige.
If you want to catch the FPO action make sure to tune in at 4pm ET each day to watch the FPO and MPO action live !