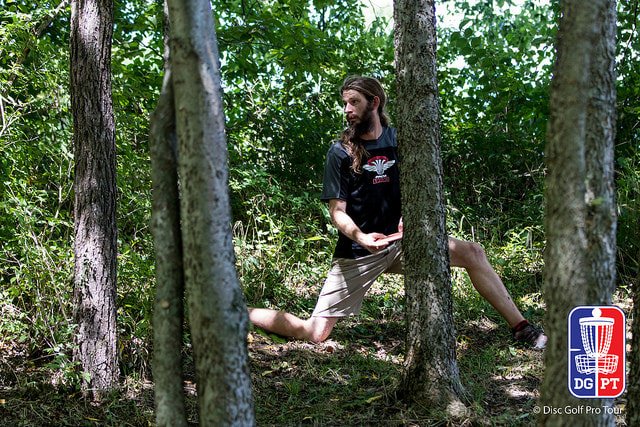 James Conrad’s clutch third shot on the challenging hole 18 on Saturday, the 54th hole of the tournament, finally closed the door and gave him his first Pro
Tour victory. We are proud to welcome to the elite company of Pro Tour champions.
It has been a thrilling weekend of play here at the Idlewild Open driven by Innova Discs and The Nati Disc Golf . Leading up to today we have seen Nate Perkins share the lead with both Andrew Presnell and James Conrad after rounds one and two respectively. However, from the drive on hole one today, everyone on the lead card (and even a few on the chase) made it clear they wanted a shot at the win.
Paul McBeth came out gunning, carding the eagle two on hole one . His UDisc scorecard showed a streak of blue from one until hole eight where he had to settle for a par after scrambling on his second shot. Paul’s performance on the front nine began to tell the story of how the final round was going to play out here at Idlewild.

It wasn’t long until we began to catch wind of another player shooting just as well though from the chase card. While Paul McBeth was laying the groundwork on the lead card, Paul Ulibarri was setting the pace on the chase card. It wasn’t until hole fourteen that Ulibarri began to falter when he carded a double-bogey and followed it up with a bogey on fifteen. These two holes would ultimately move Uli to fourth for the tournament.

Chris Dickerson was the next player not on the lead card to make a run at the lead. Chris shot the hot round today with an -8, carding only one bogey. Chris played a solid first and third round this weekend, starting on the feature card on Thursday and shooting well enough to be on the lead card for Friday. While his Friday round was not where he wanted it to be, Chris’s third round was strong enough to land him a third place finish.

This leads us to the individual who played consistent golf all weekend, James Conrad. The Disc Golf Pro Tour 2016 Rookie of the Year , James joined us again this season and so far has only missed playing in the Utah Open. Most memorable so far this season for James was his second place finish to Jeremy Koling during a playoff at the Waco Charity Open. James consistent play this weekend brought him to a tie for first with Nate Perkins to start the day. While James and Nate would start the day off tied, it was James and Paul McBeth who would eventually become contenders during the round. While Paul started with the hot round, Hole 10 would be where things began to get interesting. On Hole 10 Paul carded a double bogey five while Conrad carded the par three. The round then became a shot for shot horse race between the two until we made it to Hole 16. On Hole 16 Paul went OB and carded a five for par while James was able to keep it inbounds and land a birdie four. This gave James the cushion he needed to pull off the victory. One of the other clear factors which led to James Conrad’s first Pro Tour victory was that he avoided taking any OB strokes today. He finished third on the weekend in both OB rate and Circle One putting percentage, making 96% of his circle one putts.

It was an exciting finish here at the Idlewild Open driven by Innova Discs & The Nati Disc Golf Store . Our next Pro Tour stop will be in two weeks at the Vibram Open. We only have two more events until the tour championship. It’s going to be a race for the finish in tour points. If you’re interested to see where your favorite player is in the Tour Standings , they are updated as instantly as the final scores are entered.
James Conrad’s win moves him 5th in tour points and all but secures his bye to the semifinals at the championship in October.
Thanks for following the Pro Tour! If you haven’t already, make sure you follow us on Facebook , Twitter , and Instagram and be watching for our updates in two weeks from the Vibram Open!