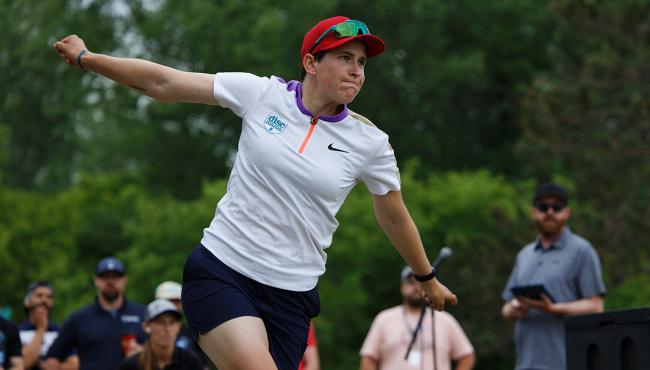 Taking down the title at the Disc Golf Pro Tour – Preserve Championship designed by Leiviska Disc Golf takes a 100% effort on every single shot.

The scores are low, and the pressure to make a move is evident each step of the way.

There were a few moves made on Saturday in Clearwater, Minnesota.

As the temperatures dropped from Friday’s scorcher and the winds picked up, the FPO leaderboard shifted throughout the round with Ella Hansen surging for a tie for the lead at one point, Missy Gannon rising into contention and Holyn Handley turning in the hot round of the day to enter the mix.

Holyn Handley owned the hot round in FPO on Saturday. Photo: DGPT

But at the end of the day, there wasn’t a move at the top.

It didn’t appear as easy as it did on Friday for Paige Pierce, but the grit was there, and Pierce enters Championship Sunday with the same three-stroke lead that she took after the first 18 holes at the Airborn Disc Golf Preserve.

Pierce had highlights in every area of the game, namely off the tee, where she leads the field in strokes gained tee-to-green (15.66) on the weekend, as well as circle 1 in regulation (56%), according to UDisc.

Once Hansen took off, she was rolling, grabbing birdies on seven-straight holes to pull even with Pierce with a circle’s edge putt on hole 11. She had a chance for the outright lead on 12, but the putt sailed wide and to the edge of the Mississippi River where she settled for bogey to put Pierce on top, a position she held and added to with a birdie on 18 for her three-stroke margin.

Hansen enters Sunday three strokes back. Gannon’s deficit is four strokes and Handley rounds out the lead card at 11-under, six strokes behind Pierce.

Tasked with following up a 12-under opening round, Bradley Williams fit the bill.

One stroke off the hot pace on Friday, Williams responded with another scorcher, grabbing 13 birdies — including six-straight to finish — for another 12-under round. In doing so, he takes a three-stroke lead into Sunday as he looks for his first PDGA Elite Series win since the 2016 Vibram Open.

Williams credited the putter for his success. He went 100% from C1X and connected on his only two putts from circle 2 on Saturday.

Not a surprise over the past two months, Simon Lizotte is back in contention for the win and did so in typical Lizotte fashion.

He started his 12-under round with a 60-foot connection on hole 2 and added two eagles in the final four holes. The first came via a 310-foot throw-in on 15 and he closed his day with an eagle on 18 to pull within three of Williams’ lead.

James Conrad overcame a double bogey but with stellar play off the tee, turned in his second-straight scorecard at double-digits under par, joining Williams as the only players in the field to do so.

Conrad, who one year ago Sunday through a shot heard around the world, is joined by Kyle Klein at 20-under par for the weekend. Klein maintained his spot on the lead card with an eagle of his own on 18 via a circle’s edge putt.

Ricky Wysocki, in his return from injury, and Garrett Gurthie, the day one leader, lead the chase card at 19-under, five shots back of Williams.

Saturday was the six-year anniversary of Pierce and Williams winning the first ever Disc Golf Pro Tour event, according to PDGA Stats on Twitter.