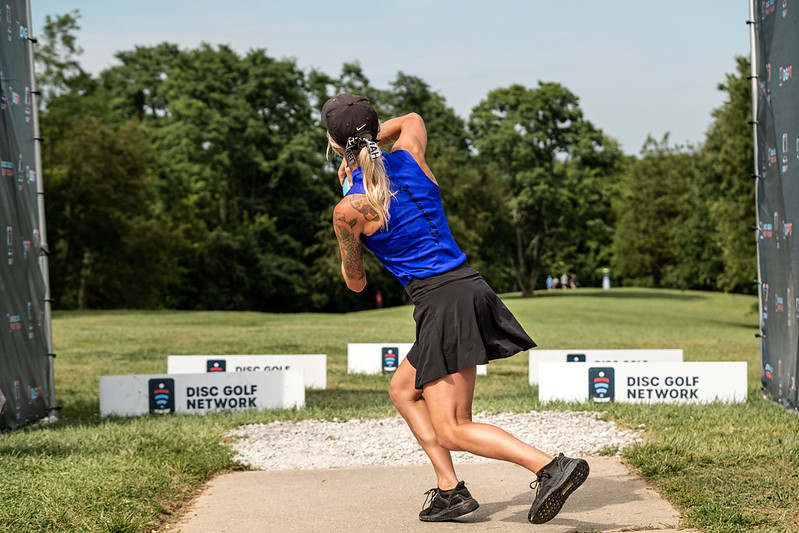 By David WeaverAugust 14, 2021No Comments

Day 2 at the Idlewild Open presented by Dynamic Discs and The Nati Disc Golf brought fans an exciting shakeup in the MPO division with day 1 leaders Ricky Wysocki, Kyle Klein, and Kevin Jones all moving down the leaderboard. Moving up to the top of the field was none other than 5x World Champion Paul McBeth who shot the hot round of the weekend at -11 56 (1066 rated).

McBeth (currently at 20 strokes under par for the event) sits 3 strokes ahead of day one leader Kevin Jones who despite 3 bogeys throughout his round managed to finish his second round at 7 under par. Also moving up the leaderboard and onto the lead card heading into the final round is Andrew Marwede who shot an impressive bogey free 59 (8 under par) to move into a T3 position alongside Kyle Klein.

McBeth looks to add a second Idlewild Open win to his long list of DGPT titles. His last victory in Burlington came in 2018 with a 4-stroke victory over James Conrad.

Day 2 saw slightly higher scores from the MPO division despite a slight climb in eagles from the field which moved up to 30 compared to yesterday’s 24 eagles and 1 ace.

Other noteworthy scores coming from the field of 120 men include Terry Rothlisberger (currently T-16) and Kris Orrick (currently T-46) who both finished with a score of 59 (-8).

Kyle Klein finds himself on another final day lead card headed into Sunday’s round. Klein, who shot a -6 in round 2 currently sits 4 strokes off the lead.

In the FPO division, Paige Pierce played what can only be described as an up and down round which concluded with a double-bogey on the final hole. While Pierce’s round was certainly not her best performance, she still shares a piece of the lead with fellow competitors Sarah Hokom and Paige Shue.

Rounding out the lead card in the FPO division will be Missy Gannon who shot an impressive 65 (-2) to move up 6 places into solo 4th. The highlight of Gannon’s round was a 221ft throw in for eagle on the par 4 14th followed by a 49ft putt on the following hole to save par. Unfortunately for Gannon, OB’s on holes 16 and 17 seemingly evaporated some of the hard-earned strokes earlier in the round but non-the-less, Missy sits 2 strokes off the lead with 18 holes to play.

Paige Pierce is no stranger to victory at Idlewild with wins in 2017, 2018, and 2019. With a great final round, Pierce could add a 4th title to her impressive resume.

Also shooting a score of 65 (-2) during day 2 was newly crowned PDGA Women’s Masters World Champion Ohn Scoggins who moved herself into 6th place after a disappointing six over par in round one. Scoggins, who currently sits 17th in the DGPT Standings, could move up several spots with another great round tomorrow which could greatly benefit the Los Angeles native headed into the DGPT Championships in October.

Tune in tomorrow as competitors battle it out for the final round in Burlington to see who will be crowned the Idlewild Open Champion! Live scoring will be available through UDisc Live and live coverage begins at 1:30pm on the Disc Golf Network. Post-production coverage will be available starting tomorrow from JomezPro, Gatekeeper Media, and GK Productions.