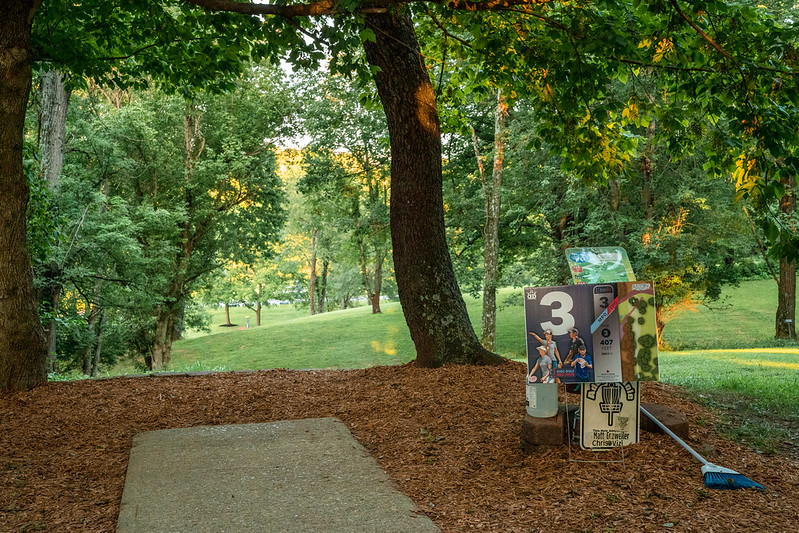 By David WeaverAugust 13, 2021No Comments

Day one at the Idlewild Open presented by Dynamic Discs & The Nati Disc Golf has concluded and after 18 holes of competition, we have a three way tie in the MPO division while Paige Pierce controls a solo lead in the FPO field.

The first day of play in Burlington saw a little bit of everything ranging from a mid-afternoon weather delay to eagles and aces all across the leaderboard. However, despite weather related setback for the second weekend in a row, the entire field finished round one and with some luck should be clear of any tournament halting weather for the remainder of the weekend.

Co-leader Kevin Jones carded two eagles during round 1 at Idlewild both of which resulted from circle 2 putts (38ft and 49ft respectively).

Finishing round one with 1058 rated rounds at -10 under par (57) are no strangers to the lead card; Ricky Wysocki, Kevin Jones, and Kyle Klein.  Both Wysocki and Klein managed to finish with bogey free rounds while Jones carded a single bogey complimented with two eagles to take a slice of lead headed into Saturday. Behind the three leaders sit nine players within 2 strokes of the lead which will make for lots of excitement during day two.

The MPO field saw a total of 24 eagles during Friday’s round but not to be outdone was Chris Dickerson who recorded the only ace of the tournament thus far. Dickerson laced a perfect turnover backhand down the 258ft hole 9’s fairway which smashed chains and had onlookers and card-mates jumping and hollering. Dickerson currently sits T-13th at -7 under par, only 3 shots out of the lead with 36 holes to play.

Chris Dickerson’s round 1 hole-in-one was complimented by 7 birdies and 100% circle 1X putting.

In the FPO division, an 18 hole battle ensued with multiple lead changes occurring during the last few holes. Coming out on top after the final putts of the day dropped was Paige Pierce who has won the Idlewild Open 3 out of the last 4 years. While Pierce struggled midway through the back 9, the 5x World Champion put on a world-class finish on the last 4 holes to end her round in the lead by one stroke. Paige’s round concluded with two birdies and an eagle on her last four holes which included a 38ft finishing putt for 3 on the par 5 18th hole (the only eagle 3 in the entire FPO field). While Pierce fell behind mid-round, her performance towards the end shows why she is the undisputed best female player in the game and will be a great confidence booster headed into Saturdays round.

Paige Pierce’s eagle 3 on the finishing par 5 18th hole was the only eagle of the day in the FPO division. Fittingly, she sits atop the leaderboard by a single stroke.

Not to be overshadowed by Pierce was 1x World Champion Paige Shue who had the most consistent round of the 35 FPO players with 15 pars (which were all consecutive), 2 birdies, and a single bogey on her scorecard. While Shue has been absent from many tour events over the past two seasons as she became a first-time mother earlier this year, she clearly doesn’t plan to take much time to ease her way back into top form. Shue’s Friday performance puts her 1 stroke out of the lead with a 2 stroke buffer over 3rd place. Will fans get to watch a Paige vs. Paige battle as we get down to the wire on Sunday? Only time will tell?

Tune in tomorrow as play picks back up during round two of the Idlewild Open presented by Dynamic Discs and The Nati Disc Golf. As always, live scoring will be available through UDisc Live and live coverage begins at 1:30pm on the Disc Golf Network. Post-production coverage will be available starting tomorrow from JomezPro, Gatekeeper Media, and GK Productions.