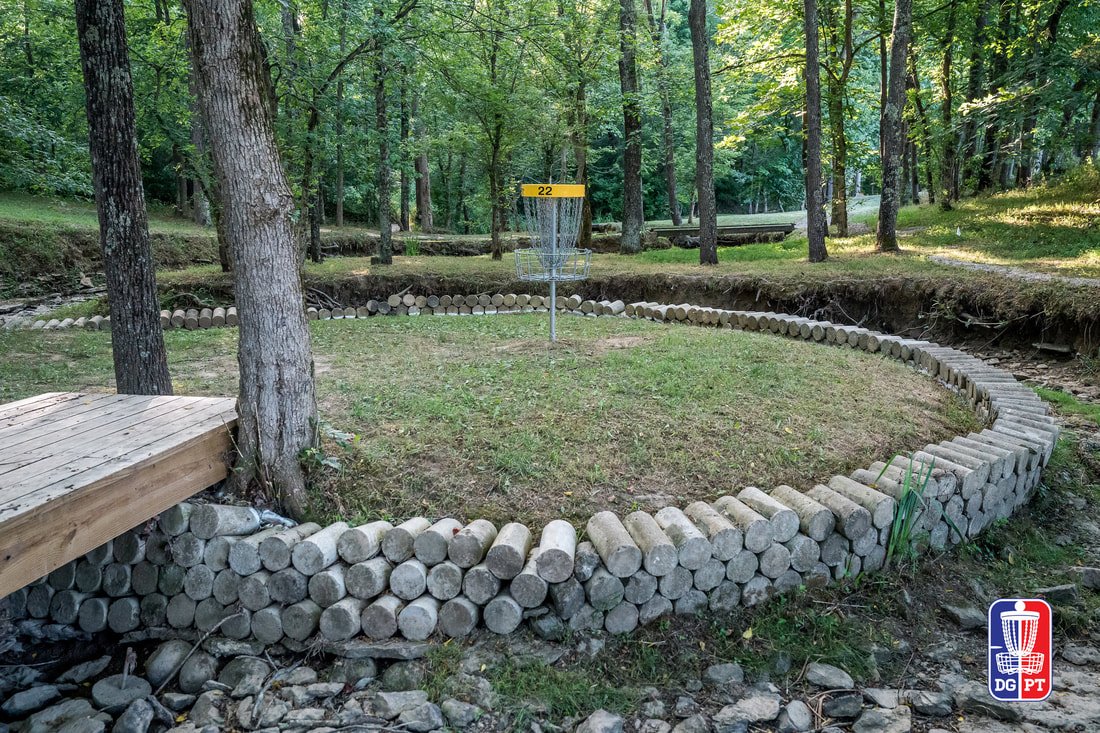 Idlewild Open Presented by Innova MPO Round 2: Jones in the Zones

Kevin Jones has grown his lead by a few more to finish the day at a total 16 under par. Spending the Final Round on the lead card with him will be Zach Melton (-12), and James Conrad and Michael Johansen (tied at -10).
Ever since his breakout performance at the 2017 USDGC folks have been looking for the moment when Kevin Jones would show up. Today, folks, at the 2018 Idlewild Open Presented by Innova, is that day. Finishing the round at 6 under par, Jones is now the proud owner of a 4 shot lead over southpaw Zach Melton who tossed a nice 7 down, moving into second at 12 under. Behind him is a hippy-flow-gumby-smooth pair of players tied at 10 under par, none other than James Conrad and Michael Johansen. Paul McBeth’s putt on hole 18 was the deciding factor in whether he would make the lead card for the final day, but the circle’s edge test got him when he came up a few inches short. A good part of the MPO field played some if not pretty much all of round 1 before taking on round 2 this afternoon.

Let’s start our review of the day right at the top. Don’t be confused by how low the scores might seem here at Idlewild compared to some of the rounds we’ve seen lately. Eagle may have thrown back-to-back 16 unders, but Jones’ total 16 after two rounds is already 3 better than last year’s winning score. Before I get into the details you just have a look for yourself:

Kevin Jones’ stats for the event.
​You’re not seeing things. Kevin is 100% perfect putting inside Circle 1. 31 putts inside Circle 1, and 5 putts from Circle 2. Probably the most high-pressure putt of his day was the 49 footer for a par save on an OB drive on hole 17 during round 2. But his best putt of the day was moments before on hole 16, dropping in a 60-foot putt for the eagle 3 on the undulating hills of the par 5. For tomorrow’s lead card, Kevin quite simply has thrown the most birdies and the fewest bogeys, I guess that’s just what it takes.

I am beyond excited to talk about our next player, Zach Melton. As a lefty, let me tell you, the only thing better than watching some southpaw footage on the lead card is when you have the same name and spell it the same way. Melton is a tour staple with his iconic look, and he put his stamp on the course today throwing 7 under, just one of the hot round of the day. That, plus his first round 5 under is enough to give him sole possession of second place. Let’s take a look at how his stats played out:

Zach Melton’s Stats for the event.

​After any other day two of any DGPT event, 97% putting inside Circle 1 would be in contention for 1st. Today it only netted Zach 9th in that category. Probably the most notable part of Zach’s day was just how close he came to playing the round clean. It was only a bogey on hole 17 that marred his card.

Johansen makes his way to the lead card tomorrow playing all around great golf. As he pretty much always does. He’s not leading any category in the stats but he’s also not letting any part of his game take a break. That consistency show’s as Michael picked up an elusive bogey-free round here at Idlewild. Conrad on the other was making his money from Circle 2 today, putting at 100% behind 33 and 66 feet. Putting only 80% inside Circle 1 I think James got confused, why was he trying to get to circle one when he could make everything he took from Circle 2! All jokes aside, Conrad is leading the field for putts from circle 2 for the tournament at 63%, which is more than double the current season leader for Circle 2 putts, which is, oh wait…of course…James Conrad. The man is a Circle 2 Putting machine.

That’s all I’ve got for you today. Don’t miss our coverage of the final round of the Idlewild Open Presented by Innova as it continues tomorrow, Live at 2 PM EST. Tune in to find out what happens when a bunch of shaggy guys try and chase down a clean cut up-and-comer with a nice, but certainly not safe, lead.