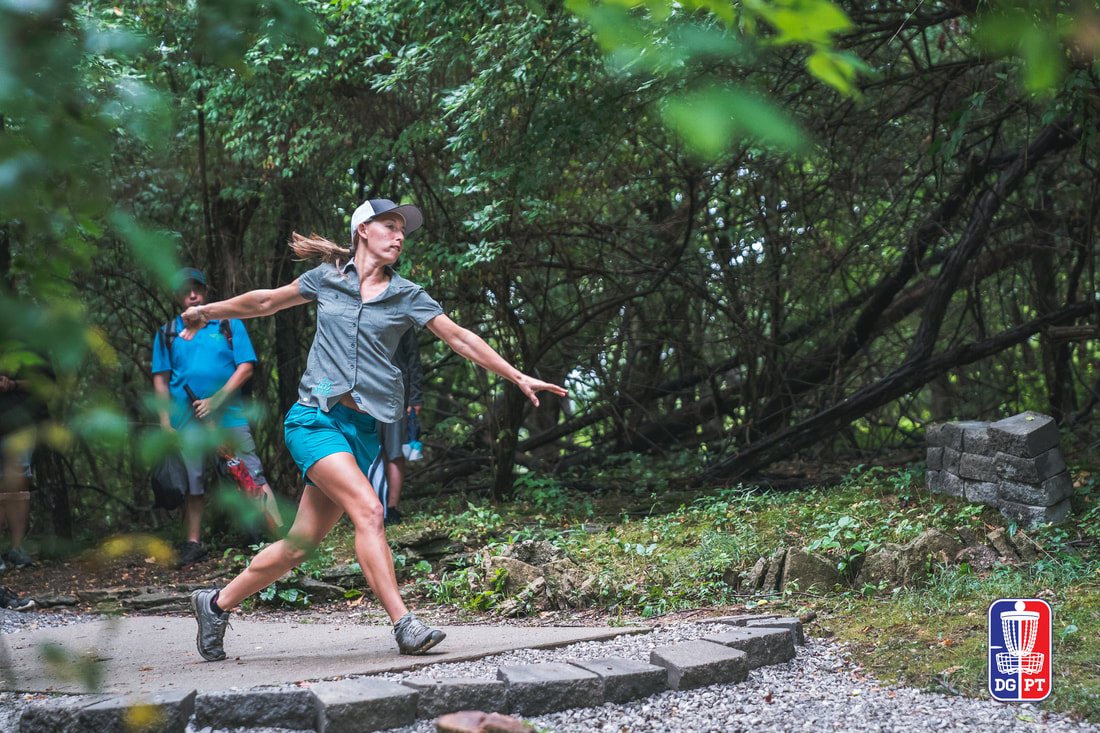 Idlewild Open Presented by Innova FPO Round 2: Pierce Peels One More Over Hokom

If I told you that Paige was in first with three OB penalties you might laugh, but sure enough she is at 5 over par total now. Hokom needs to figure out the back nine as it has troubled her yesterday and today.
After a wet and wild first-round yesterday at the Idlewild Open Presented by Innova Champion Discs and Nati Disc Golf, the FPO players kicked-off today’s round hoping to avoid the stormy conditions they encountered yesterday here in Burlington Kentucky.  In fact, they were very fortunate to complete yesterday’s round with only a slight rain delay, while play ended up being suspended for a majority of the MPO field, until early this morning.  Even without the rain, the Idlewild course has proven to be very technical with a combination of tight wooded fairways and elevation changes.  The challenging par-66 layout test even the most experienced players and requires every shot within their arsenal.

After a decent start compared to the rest of the field, Paige Pierce was able to navigate her way through the tough weather and course conditions during the first round to secure a one-shot lead over Sarah Hokom, who had a hot start but stumbled a bit coming in with some unfortunate bogeys and a double bogey on holes 16 thru 18. Rounding out the top card for today’s round we have Rebecca Cox, along with a relative newcomer to the Tour, Mandy Sharp, both tied for 3rd and 6-throws behind our leader Pierce.  On the chase card, we have Paige Bjerkaas, Holly Finley, Madison Walker, and Jessica Weese, who all need to shave some throws in today’s round if they want a chance at catching the leaders going into Sunday’s final round.

During the start of today’s round, it was Sarah Hokom getting out to a hot start, with a quick birdie on hole 2 and then following it up with another birdie on hole 3, where she canned her putt from the edge of Circle 1.

Hole 3: @sarahhokom is on a roll. You won’t want to miss the shot-by-shot coverage of round two from the Idlewild Open driven by @innovadiscs and @natidiscgolf at 2 PM ET this afternoon http://www.dgpt.com/watch

She continued to play solid on the front 9, collecting a string of pars and only 1 bogey on hole 8.  Not willing to relinquish her first round lead, Paige Pierce kept pace carding a birdie on hole 6 and one bogey on hole 9, to make the turn onto the back 9 tied with Sarah at +3 for the tournament. Rebecca Cox couldn’t seem to find her groove on the front 9, missing too many opportunities for par and ended-up giving 5 more stokes to the leaders.  The pressure of being on the lead card proved to be a distraction for Mandy Sharp, as she started with 2 bogeys on holes 1 and 2 and ended up with back to back triple bogeys on holes 6 and 7, giving up 8 stokes to the leaders and slipping back to 5th place as the lead card made the turn to back 9. From the chase card, Holly Finley moved-up 3 spots and into a tie with Rebecca Cox for 3rd place.

Trying to keep pace and not lose any more ground to the leaders on the back 9, Rebecca Cox finds her line and nearly aced the elevated basket on the short 192-foot hole 11, and sneaks away with the only birdie from the lead card.

Hole 11: Rebecca Cox finds her line. You won’t want to miss the shot-by-shot coverage of round two from the Idlewild Open driven by @innovadiscs and @natidiscgolf at 2 PM ET this afternoon http://www.dgpt.com/watch

​ The two leaders continued to trade pars until hole 13, where Hokom was able to take sole possession of the lead with a bogey, while Pierce suffered a double bogey and dropped 1-stoke.  Cox also suffered the dreaded double bogey on hole 13. Interestingly, Catrina Allen, who was sitting in 8th place, was the only FPO player to par the 472-foot 13th hole – all of the other players suffered bogey or worse.  Hole 14 produced a reversal of the previous hole, as Pierce bogeyed and Hokom carded the double, moving back into a tie for 1st place going into the final 4-hole stretch. For the next 3 holes they would remain tied, each carding two pars and a birdie, with hole 18 proving to be the tie-breaker for Paige Pierce, as she regained the lead by 2-strokes finishing with a solid par to Hokom’s double bogey.  Holly Finley also suffered a double bogey on the final hole, but her +6 round for the day proved to be good enough for sole possession of 3rd place and a place on the lead card for the final round, tomorrow. Paige Bjerkaas and Rebecca Clark ended up in a tie for 4th, but both have their work cut-out for them as they are 18-strokes off the leader, Pierce, going into the final round. Deeper in the field, Jessica Weese and Catrina Allen each moved up 2 positions into 6th and 7th place respectively, but are a long way off the pace of the lead card.  The stage is set for another exciting finish tomorrow between two of the world’s top FPO players, as Paige Pierce leads Sarah Hokom by only 2-stokes going into the final round of the Idlewild Open. The rest of the field has their work cut-out for them if they want a chance to win, at this point.

Be sure to Join the Pro Tour live at 2pm EST for today’s FPO and MPO shot-by-shot, coverage, and check out the Disc Golf Pro Tour all weekend long for updates, tournament news, and live coverage of the 2018 Idlewild Open presented by Innova Champion Discs and Nati Disc Golf .