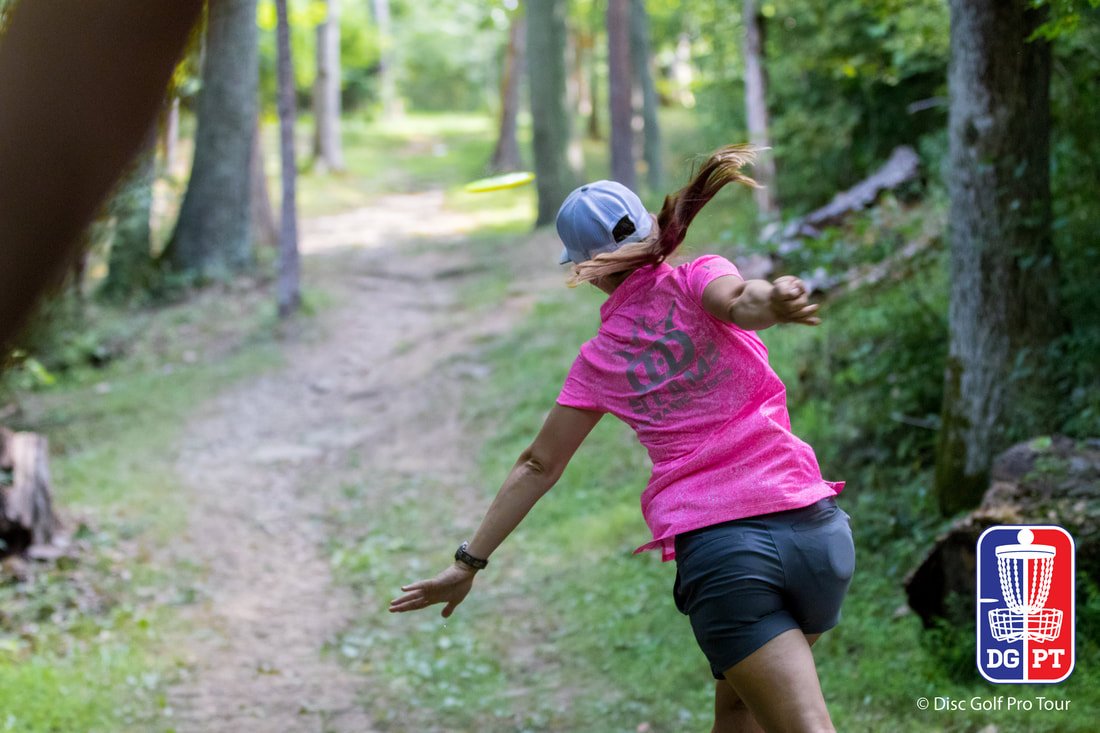 After less than ideal weather conditions Paige Pierce (+3) leads  the 2018 Idlewild Open Presented by Innova. Not to be forgotten, Sarah Hokom (+4) trails Pierce by only one after a disappointing finish to her first round.
Weather Today, the first day of the Idlewild Open Presented by Innova, the fate of the FPO field was mostly at the mercy of the weather. After a rain delay and less than ideal conditions, it was really only Paige Pierce and Sarah Hokom that were able to match their performances from last year. While you’re following along, just remember that Idlewild is far from easy to score on. Paige Pierce won the FPO last year with a total 15 over par and then she shot the hot round of the week at three over par. Hokom clenched second place in 2017, nine throws behind Paige at 24 over par. After round one in 2018, Paige is in first place at 3 over par, Hokom in second place at 4 over par, and third place belongs to a tie, at 9 over par, between Rebecca Cox and Mandy Sharp.

Paige’s round was a roller coaster of hot and cold streaks. Sinking her first birdie putt from 16 ft on hole 1 is the first step in starting a round hot but you gotta avoid giving the throw right back by bogeying the next. Pierce wasn’t the only bogey on hole 2 though, only 37% of the field carded a par, while 63% carded worse as the stingy basket rebuked the entire field their chance at scoring. Pierce went cold until she warmed back up after a third bogey on hole seven, carding birdies on 8, 9, and 11. Pierce’s momentum then slowed immediately, marking down bogeys on holes 12, 14, 16, and 18. She only carded pars on the rest, but it still left her the best. She leads the competition as we look at another stormy forecast tomorrow.

Sarah Hokom refuses to be slowed down. After her wins at SFO and DGLO, she had snatched the Pro Tour Points top spot from Paige Pierce. After our first round today she is in sole possession of second place. Through the first 11 holes, Hokom seemed in the best shape. She wasn’t scoring big, but she was staying safe. With so many dangers on the course, it’s more about how many bogeys can you avoid rather than how many birdies can you card. Hokom stumbled late though, after finishing the front 1 under, she went 5 over on the back, finishing with a demoralizing bogey, bogey, double bogey on holes 16-18.

Perhaps the most exciting story in the division right now is the arrival of Mandy Sharp. She jumped on tour back in Utah and was able to string together a great start to her day here in Kentucky. After being two down through four. Mandy tripped hardest on holes five and sixteen, carding triple bogeys on both. Those extra strokes on those two holes are really all that separates Mandy from being right in it with Paige and Sarah. She’s getting there on her scramble and putts, which she is ranked top three in both. She’s even putting well enough to break into the 90 club, racking up a 90% putting rate inside circle 1. I expect to see more out of Mandy as she becomes more experienced on the tour, so watch closely.

This course is hard, there is no doubt about it. Not a single player was able to finish even to par or better. No one played an entirely clean front or back either – though Sarah Hokom did manage a 9 hole bogey-free stretch from 3 to 11. Of the 19 player field, there were only 18 birdies, that’s right, not even enough to give every player one. On top of that, the weather was beyond intimidating. As the feature card finished out hole 18 there was a clear wall cloud threatening severe weather in the near future and we have entered an indeterminate wait on a new rain delay. Stay tuned for updates and cross your fingers that we get to see some live action soon. You can always check the weather status of the Pro Tour at the weather section of our site. If you’ve got good weather wherever you are, what are you doing inside, go out and play!