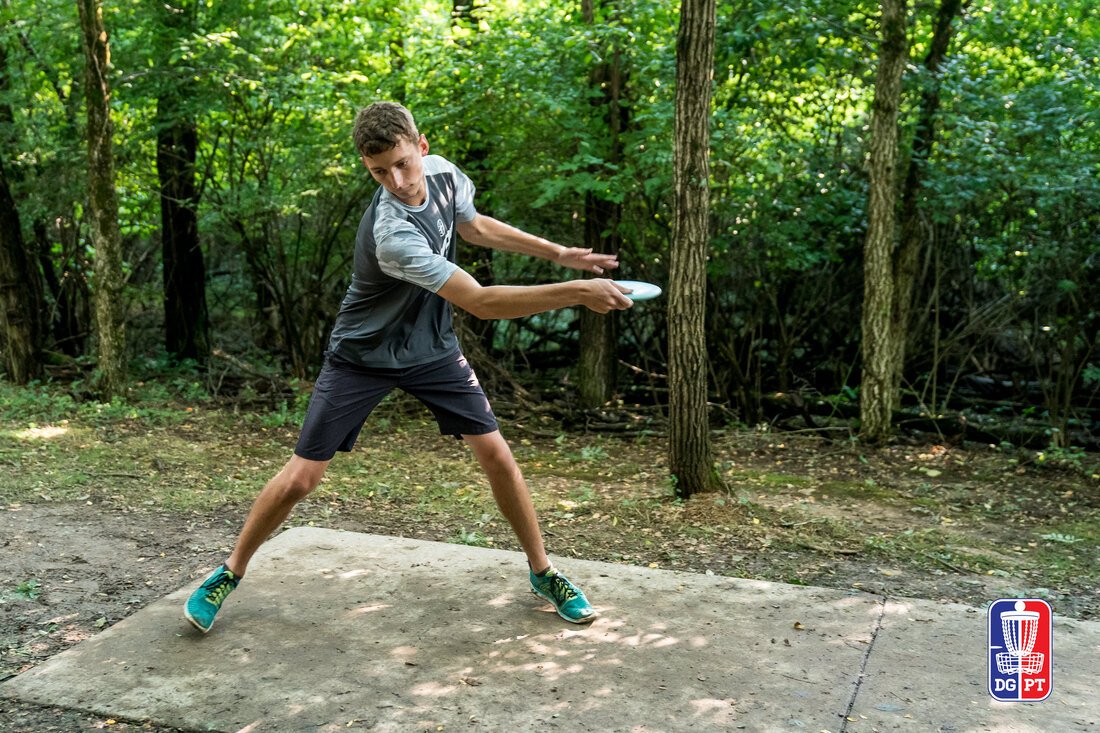 With another day of perfect scoring conditions came another set of blazing scores from the MPO division. With a solid log jam after first and second place on the leader board after round one, many players were looking to make their mark on moving day.

A group of early movers includes Alex Russell, Armando Ensenat, and Logan Bowers who all finished the day carding two six-under and a five-under respectively. Alex and Logan finish the day in a tie for 26th place after moving up 25 and 20 spots respectively. Armando would use his six-under performance to move up 23 spots into a tie for 23rd place.

Another early mover was Edward Ward who used an ace on hole three to help propel him to a seven-under performance. Edward was not able to stay bogey-free, but his seven birdies and one ace helped move him up 19 spots into a tie for 17th place.

Nathan’s performance was one of the best of the day. He started with three birdies but said that the double bogey that he took on five was what probably propelled him to make so many more birdies across the rest of the round. He would go bogey-eagle on holes seven and eight before turning on the heat. Queen carded birdies on the next seven of the final ten holes. While he moved up 39 spots it looks not to be enough to make it onto the lead or chase card tomorrow. With a -10 under his belt, Nathan could be in a position to make a push for a podium finish tomorrow.

Trevor Harbolt and Chris Clemons both carded -9 today and will be in a position to maintain and push for a top ten finish tomorrow. Chris’s round started hot with him carding four birdies in the first five holes. He would then use a birdie sting on 11 through 14 to solidify his bogey-free performance; he is going into tomorrow just inside the top ten. Trevor, on the other hand, had a seven-hole par-streak to stay bogey-free for the day and finished eagle, birdie to land well within the top ten going into tomorrow.

On the lead card, Emerson Keith played safe golf staying bogey-free until hole seventeen and picking up eagles and birdies when he could. While Emerson’s scoring was sparse, he did card an eagle on hole eight for his first hole under-par for the day. A few birdies across the back nine helped keep him on chase card going into the final round.

At the top of the card, Kevin Jones and James Conrad sparred as Kevin held a three-throw lead going into the round and Conrad sought to unseat him. They would go shot-for-shot on the first three holes before James was able to get an edge, carding a birdie on hole four to Kevin’s par. Kevin gained the throw back on hole five, and they returned to going shot-for-shot until hole nine. On holes nine and ten, Kevin would play himself, birdieing nine and taking a bogey on ten while James carded pars. They returned to their dueling shot-for-shot game until the challenging hole 15. Kevin was able to avoid going over par on the hole for the first time since round two last year when he birdied the hole. It would be James who carded the birdie today moving the score within two.

James would eagle sixteen while Kevin carded a birdie to move within one. On the tricky hole seventeen Kevin would walk away with a birdie while James had to save bogey to give Kevin his original three throw lead.  After carding pars on the 18th, the stage is set to see if James, or someone else, can climb the leader board again to challenge Kevin. They both shot double digits under par. For Kevin, it was two worse. For James, one better. Unless Calvin Heimburg catches on fire, one of those two is likely to be our 2019 Idlewild Open champion.

Rounding out tomorrow’s lead card will be Calvin Heimburg and Dan Hastings. Calvin played consistent golf all day to help keep him in a stable third-place position going into the final round. Calvin’s two falters on the par-four holes five and twelve would keep him from making any further moves today. Dan also put together a day of stellar play that had all but sealed his spot on the lead card until he carded a bogey on the rolling, long hole sixteen. He would bide his time until the lead card finished and Emerson Keith carded a bogey on his final hole to find his spot on the lead card.

Make plans to tune in and watch the final round of the Idlewild Open driven by Innova and The Nati Disc Golf live tomorrow starting at 3:30 PM ET.