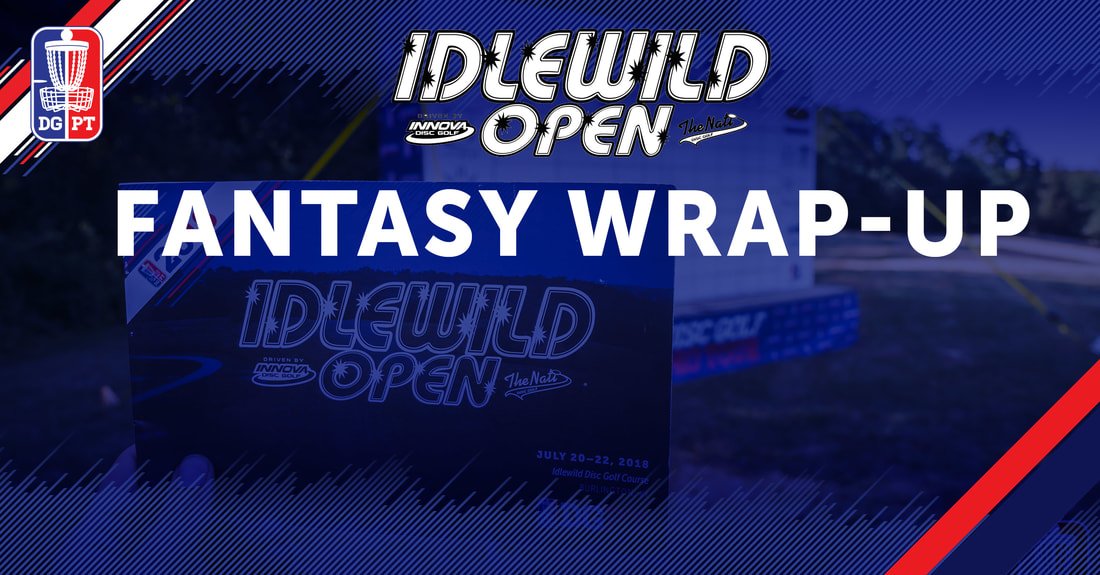 The Idlewild Open driven by Innova Discs and The Nati Disc Golf has come to a close, and now it is time to recognize the winners in our two fantasy leagues in this week’s fantasy wrap-up.
A consistent pick across the weekend was local disc golfer Rebecca Cox who finished in third place. A perennial favorite, Paul McBeth was picked by everyone who made the top ten and names like Michael Johansen, and James Conrad will be seen as well on the leaderboard. Those who won this week took advantage of their options of solid “woods players” to choose from, and boy did it pay off.

In the free league, a name we are seeing consistently at the top was Luke Vaughn. Luke amassed 1209 points by choosing Paul McBeth, James Conrad, Kevin Jones, Eric Oakley, Paige Pierce and Rebecca Cox. For only the second time this season the winner of the free league had fewer points than the Patreon league, had Luke been a part of the Patreon league he would have finished in second and come out with a really sweet disc golf bag.

There was a tie for second in the free league this week where both individuals chose Paige Pierce, Rebecca Cox, James Cole, Nate Perkins, Chris Dickerson, and Paul McBeth. These six picks netted 1202 points for both Bryan Alexander and Ryan McMath.

Chris is the name of the fantasy player who came in fourth place this week. Only nine points away from the tie for second, he chose Paul McBeth, Drew Gibson, Grady Shue, and his alternate stepped up big with Devan Owens being overseas. Chris picked 4th place winner Nate Perkins. Chris also chose Paige Pierce and Rebecca Cox to land in the top five this week.

Rounding out the top five in the free league was Bryant Chamberlain. Bryant chose Paige Pierce and Rebecca Cox (following suit of the rest of the top five) and then Zach Melton, Garrett Gurthie, Michael Johansen, and James Conrad. This netted Bryant an 1184 point total for this week.

Gabe Gales is a new name at the top of the Patreon league. He was able to help the Patreon League overcome its regular losses to the free league with a 1259 score choosing six players who finished in the top ten for the tournament. On the MPO side, he chose Zack Johnson, Michael Johansen, James Conrad, and Paul McBeth. In the FPO division, he chose Paige Pierce and Rebecca Cox.

In second place we see Deron Galston switching up the picks by choosing Sarah Hokom and Jessica Weese in the FPO division and then on the MPO side he led with SmashboxxTV personality Dana Vicich and followed with James Conrad, Michael Johansen, and James Conrad. These picks netted Deron an impressive 1165 point total.

Scoring 20 points less this week to claim the third place spot was Travis Lamberton. He chose Paige Pierce, Jessica Weese, Chris Dickerson, Zach Melton, Nate Perkins, and ended up with points from Eric Oakley who was his alternate who filled in for Devan Owens still being overseas.

In the fourth spot on the Patreon league, Joe Keefe landed ten points below third with an 1135 total after choosing Paul McBeth, James Conrad, Michael Johansen, and Kevin Jones who was his alternate for Jeremy Koling. In the FPO division, Joe switched up the regular picks for the weekend by choosing Paige Pierce and Nicole ‘Pickle’ Dionisio.

Rounding out the top five in the Patreon league was Andrew Gillepsie with 1097 points. Andrew chose local Pro Matthew Blakely along with Bradley Williams, James Conrad, and Paul McBeth along with Paige and Rebecca in the FPO division.

This week three players were lucky because their alternate picks did very well. If you are a person who likes to live life on the edge, then this might be the route for you to go; however, it might be best to check the registration list a day or two before the event to ensure a clean set of winning picks.

The next stop on the Disc Golf Pro Tour is the Ledgestone Insurance Open presented by Discraft. Make sure you tune in August 9th-12th and get your picks in by the night of August 8th.