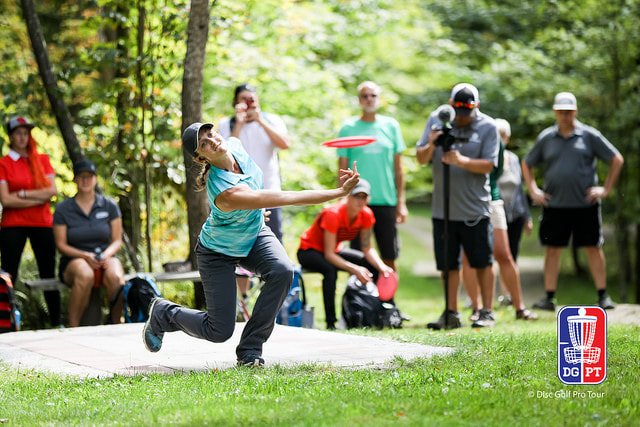 Hokom Rises to the Top

Sarah Hokom entered Friday with a one-stroke lead and the thought of having to fight tooth and nail to keep Paige Pierce from chasing her down. When the dust ​
settled, it was Hokom who separated herself from the field. Sarah tied for the hot round of 3-under par, 59 and now sits at 6-under for the event and with a four-stroke lead over Catrina Allen.
Hokom’s key to success was course management, on the out-of-bounds latent Fox Run Course. While those behind her often found themselves on the wrong side of the ropes, Hokom had just two penalty strokes in the round. Pair this with seven birdies and Sarah put together a performance that was able to separate her from the rest of the pack. When she did make mistakes, she was able to bounce back from them and not let them build upon each other. Case and point, after taking a double-bogey on hole five, Sarah was able to immediately put an end to the bleeding with a birdie on six. She had a repeat performance on hole 10 after her bogey on hole nine. Going into the final round, Hokom will need to do more of the same to prevent those behind her from believing that they can chase her down.
The person who might have the best opportunity to spoil Hokom’s victory lap is Catrina Allen. Allen has won the previous two Green Mountain Championships presented by Discraft. It’s no surprise to see her once again near the top. After a slow start to the event, Allen was able to string things together in round three and tied with Hokom for the hot round of the day at 3-under par. Now sitting 2-under for the event, Allen will need a spectacular performance to chase down Hokom.
This year, when Paige Pierce has been within striking distance, she normally takes advantage. It was a different story on Friday when Pierce had a sobering front nine. After a triple-bogey on hole seven put her at 8-under for the round, Pierce joked that maybe she too may have suffered from the same back injury as Paul McBeth. The laughs that followed may have been just the medicine that Pierce needed. After paring the next two holes, Pierce birdied the following six and ended up finishing the round at a respectable 2-over par, 64. Pierce now sits at even-par for the event and six strokes behind Hokom. If Pierce can channel her inner McBeth again on Saturday, she might just be able to pull off one of those spectacular comebacks that Paul has done so many times on the men’s side.
Saturday’s lead card will include both Hokom and Allen along with Jessica Weese (-1) and Valarie Jenkins (-1) who held serve on Friday by shooting 2-under and 1-under respectively. Can Hokom continue to hold off her competitors or is there a comeback in the works? Stay tuned to the Disc Golf Pro Tour with final day action beginning Saturday morning.
​