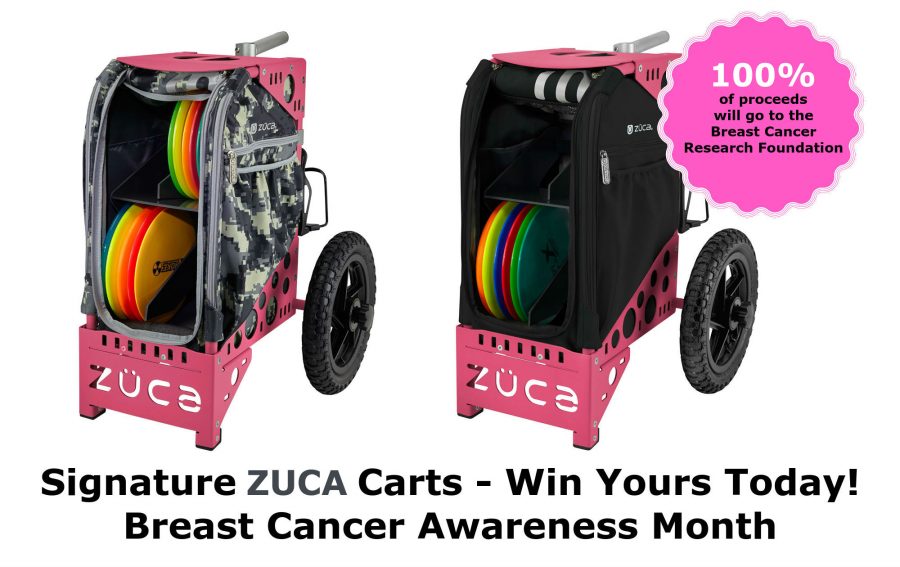 ZUCA , whose products have been popular with women for over a decade, will raise money for the Breast Cancer Research Foundation at the DGPT Tour Championship in
Jacksonville during Breast Cancer Awareness month. Ten pink ZUCA carts will be raffled off. Each raffle winner will be able to select the Tour Championship player of their choice to sign the cart.
The first cart was raffled off this morning. Find the current carts being raffled in the DGPT Store . Get your chit today!
Tour Director Steve Dodge is very supportive of the push saying, “We want more women playing disc golf. The disc golf community is generous, and since the finals lands during Breast Cancer Awareness month, it is a perfect time for us to rally the community to grow awareness for women’s health issues, and raise money for research organizations committed to help cure this disease which affects 1 out of 8 women in the US.”
ZUCA CEO Bruce Kinnee followed up with, “We are proud to be a part of the disc golf community, and have been a supporter of the DGPT from the beginning. We thank disc golfers for embracing ZUCA products with such enthusiasm, and the number of women rolling ZUCA carts such as Paige Pierce, Sarah Hokom and Kristine King has not gone unnoticed. For this reason, we decided to work with DGPT to make our annual breast cancer research donation.”
ZUCA Products Meet Player Needs
ZUCA is once again changing lives, this time, giving players more energy and saving their shoulders and backs from unnecessary strain. ZUCA’s popularity in disc golf extends from the all terrain tires and the durable frame that doubles as a portable seat.
ZUCA Donation / DGPT Raffle
ZUCA is donating 10 pink frame carts for DGPT to raffle, 5 with black bags, five with black/gray camo, affectionately known as Anaconda. The goal is to raise a total of $5000 (25 tickets will be sold per cart). ZUCA is paying for all of the shipping. The DGPT is paying all of the processing fees. The carts will be raffled off leading up the Tour Championship, during the live stream and at the tournament site itself. As a bonus, winners of the carts can choose to have a Pro player at the tournament sign the cart.
​