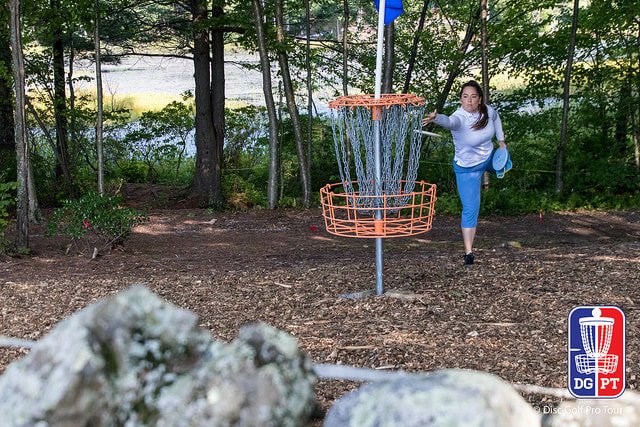 FPO Round 2: Consistency is Key

Round 2 of the Vibram Open came bright, cold, windy, and early this morning. Contending with the wind this morning included: Valarie Jenkins, Paige Pierce, Zoe
Andyke, and Sarah Hokom on the lead card. The chase card featured Hannah Leatherman, Melody Waibel, and Catrina Allen. The third card this morning had Erica Johnson, Jessica Weese, and Vanessa Van Dyken.
We will start our review with third card. It’s not very often we get to go all the way back to the third card, but Vanessa Van Dyken gave us a reason today to do just that. She shot even on the front nine this morning with one birdie and one bogey. Her back nine was a bit of a roller coaster but that roller coaster ended her with even par for the day. She now sits plus five in a tie for fourth. We will get to see her on the lead card tomorrow.
On to the chase card…
Sadly, Catrina Allen came out and did not fare well on the front nine today. She finished the front plus five. It was her back nine that was something to write home about. She started off with two birdies on the back and then played consistent par golf until the last three holes. Carding three birdies to finish the day isn’t bad. In fact, having five birdies to offset five bogies will get you even par. The story of today, as we will see, is that even par was the goal.
The lead card
Paige Pierce came into the round this morning hoping to follow up on her eagle on eighteen. While *spoiler* she did not see another eagle on eighteen, she put together a consistent round, which seemed to be today’s theme. With three bogies and three birdies she also finished the day even par.
Valerie Jenkins was not able to follow-up her under-par performance from yesterday. However, today she was able to maintain and ultimately keep the lead. After shooting plus two on the front nine, Val was able to play a consistent back nine, offsetting every bogey with a birdie. She finished the day plus two and will be leading off again tomorrow, three shots ahead of the field.
It was an exciting morning in the FPO division. Make sure you are tuned in at 3:30pm ET today to catch lead card footage during the live MPO round . You can follow along with all of the live scores over at Udisc Live . It’s been a great first two rounds of the Vibram Open, the final two are shaping up to be just as good. Stay tuned!
​