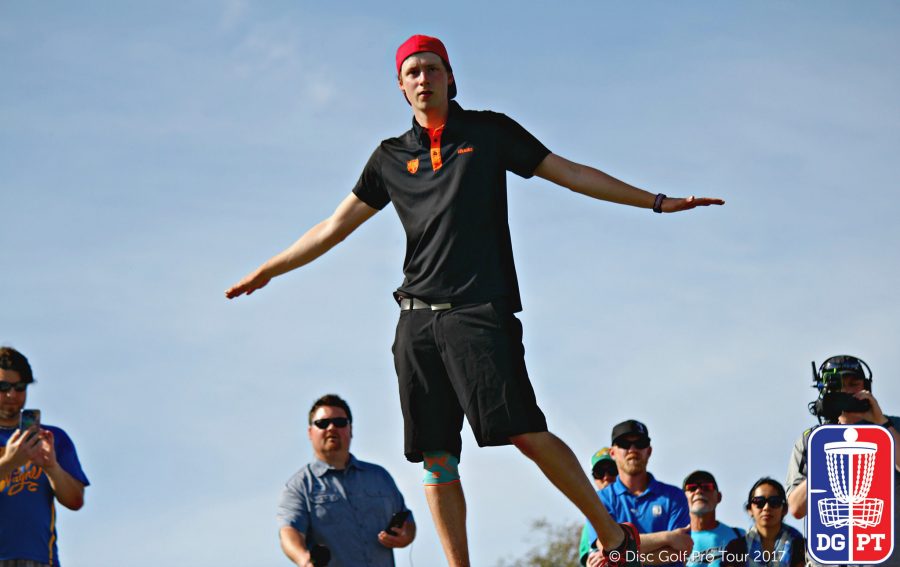 Day Three at Fountain Hills did not disappoint for the MPO division. We saw several players start out hot including Mike Conlee and Grady Shue. The story of the day though was
Simon Lizotte’s -14. Simon was able to card birdies on every hole except six, nine, twelve, and fifteen. He could have easily taken a birdie on six, nine, and fifteen. On six and fifteen Simon missed a C2 putt for birdie and on hole nine Simon laid up instead of running a death putt at the water. His solid game play helped to set him up with a hot round and a two stroke lead over Discmania teammate Eagle McMahon.
Eagle started the day off with a bogey and then birdied the next seven holes. After taking a bogey on hole ten Eagle turned it back on and birdied every hole on the back nine except hole sixteen. Sixteen Eagle had a look for birdie however, on the elevated basket he missed right but nailed the comeback putt.
Nate Sexton was the other story to follow today. He tied for the second hottest round with a -12. His birdie and par performance included two circle two putts, including one on eighteen to ensure he would be on the lead card for the final day. Nate will be looking to make the push for first place on the lead card tomorrow out at Vista Del Camino.
Grady Shue and Paul McBeth will be watching from the chase card hoping to have a shot to win. Paul will need to clean up his play to have a shot. He played solid at Vista yesterday and given this is the anniversary of his 39 at Fountain Hills, we know Paul will have a shot at winning even from the chase card. Grady Shue started off hot and could look to do the same at Vista Del Camino. Grady was recently recognized as Discmania’s hidden gem , after today he may not be so hidden anymore.
Today was an exciting third round for the first stop of the Pro Tour. We are looking forward to an exciting finish to The 2018 Memorial Championship presented by Discraft. Be ready to tune in live and watch at 4pm ET .