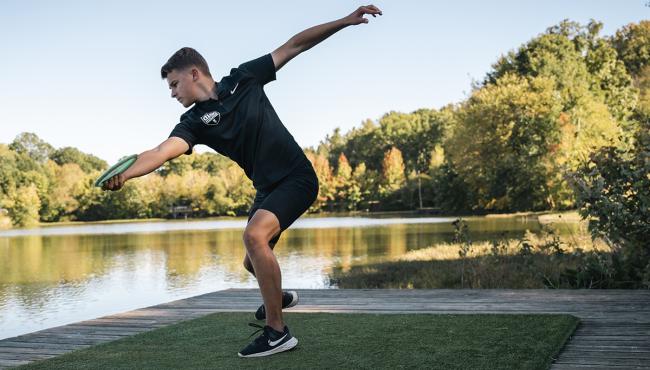 From a distance, Niklas Anttila has watched the best of the best compete year-in and year-out at the United States Disc Golf Championship.

“It felt kind of unreal to be here to compete.”

Things got real for Anttila on Thursday to kick off the 24th running of the USDGC, the final PDGA Major of the season.

Anttila was stellar off the tee — leading in fairway hits (95%), Circle 1 in Regulation (50%) and Circle 2 in Regulation (83%), according to UDisc — and limited the ever-looming danger at Winthrop for an 8-under round and a share of the lead.

Anttila is the fourth European player to lead at the USDGC and the first since Jussi Meresmaa in 2012, according to StatMando.

“I just wanted to not do anything stupid on this course — I think that’s key here,” Anttila said. “And make my putts. I did that today, so I’m happy.

“I just wanted to be in the mix after the first round. I’ve been struggling in my first rounds quite a bit and starting behind so it’s nice to have a good start to the tournament.”

This is just the start for Anttila, who is wrapping up his first year of competition in the U.S. Anttila, who jumped straight from Juniors to Open in 2017, has 21 wins in 78 sanctioned events. Highlight wins include a playoff win in 2020 at the Finnish Nationals. In 2021, Anttila bested Europe’s best at the 2021 European Disc Golf Championships for his third-straight A-Tier win of the year.

Earlier in 2022, Anttila finished 13th after his first trip to W.R. Jackson for the PDGA Champions Cup. He returned to Finland, collected a few more wins — including another Finnish national title and a fourth-place finish at the European Open — and is back stateside putting together a strong finish to his debut season in the U.S.

Anttila finished eighth at the Green Mountain Championship and 13th at the MVP Open to make a big jump in the DGPT standings and qualify for the upcoming DGPT Championships.

“This is what I wanted to do.”

Ricky Wysocki is a co-leader after a strong opening round in Rock Hill. Photo: Hayden Henry / PDGA

Ricky Wysocki has collected wins of every variety throughout his storied career.

One that’s eluded him, however, is the USDGC.

After a stellar opening round on Thursday, Wysocki is off to strong start in checking that one off the list and collecting his first PDGA Major title since 2017.

With a bogey-free 8-under opening round in pristine conditions at Winthrop, Wysocki finds himself as the co-leader with three rounds to go at Winthrop.

He was just one of two bogey-free rounds on Thursday at Winthrop, joining Noah Fiveash, who set the early pace on Thursday with a clean 7-under to make the lead card along with Garrett Gurthie and Anttila.

For Wysocki, it’s the first time he’s had the lead, or share of the lead, at the USDGC in his career. When leading after Round 1 of all other Majors in his career, he’s gone on to win 50% of the time in four tries, according to StatMando.

However, this event, known for going down to the wire, is just getting started with 11 players all within three strokes of the lead.

But Wysocki’s off to a strong start, another crucial element of taking down a title at Winthrop.

Live coverage of the USDGC begins at 2:30 p.m. ET on the Disc Golf Network. Active PDGA members receive a 50% discount on their DGN subscription.