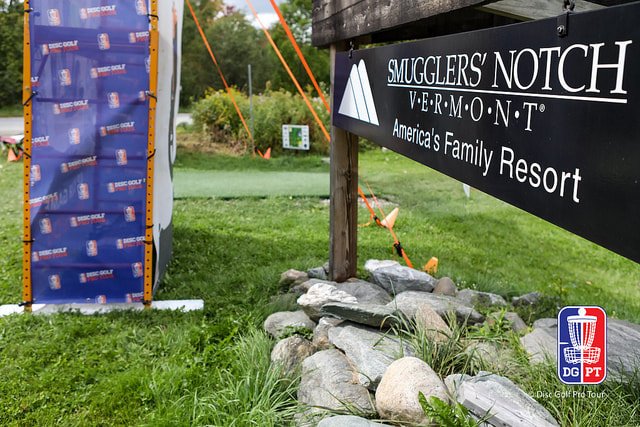 Eagle, Birdies, and Bogeys from Round Three of the GMC

Eagle
Yesterday there was an ace . Today there was an eagle at Discraft’s Green
Mountain Championship. For many an eagle is not as exciting as an ace. However, for Matt Bell today, his eagle on hole 11 of the Brewster Ridge course was downright impressive. Hole 11 plays downhill and Matt Bell threw his drive perfectly to put himself within circle one for the eagle. The good news is Matt made the cut and will be playing in the final round tomorrow on the Fox Run course. Maybe he can get an ace out there.
Birdies
Birdies were the name of the game today. Several players were looking to card multiple birdies in order to maintain or gain position on the field today.
In the FPO division Catrina Allen, Jessica Weese, and Paige Pierce matched each other in a three-way tie for the most birdies on the day. The difference is Catrina Allen was carding birdies in hopes of taking the lead, Jessica Weese was looking to make the lead card and Paige was carding birdies to recover from a triple OB eight that she took on hole seven. Jessica Weese turned her performance into a start on the lead card tomorrow, Catrina moved up two spots to second, and ultimately Paige is still only six back of the lead which if we look back to Vibram we know that even a lead that large is not safe with Paige at the tournament.
In the MPO division the story of the day was Nate Sexton’s bogey free -11 down round. In what is considered a valiant effort to reach the lead card Nate Sexton ultimately could not sustain the -11 down rounds put together by Ricky, Cale, and Nate. Michael Johansen attempted to gain some ground on Nate Doss today and was able to shave one stroke off Nate’s lead by carding an ever impressive bogey free -12 on the Brewster Ridge Course.
Honorable mention for birdies in the MPO division goes to Zach Melton and Weston Isaacs who both shot -11 bogey free rounds to break into the top 10 going into the final round of the GMC.
Bogeys
For the FPO division Paige Pierce makes the headlines today with nine bogey strokes (in not as many holes). Specifically, her triple bogey on hole seven was enough to move her down to second card tomorrow.
In the MPO division the story of the day was the lack of bogeys in the top 10. Between the top 10 players in the MPO division today there were 3 bogeys. Ricky Wysocki took a bogey on hole 15 after hitting a tree early, Cale Leiviska carded a bogey on hole 11 after both of his first two shots ended in the rough, and Jeremy Koling carded a bogey on hole one after he hit a tree early on his drive.
The lack of bogeys in the top ten shows it’s shaping up to be an exciting finish in the MPO division tomorrow on Fox Run. Make sure you are tuned in to watch all of the action live at 2:30pm ET !
​