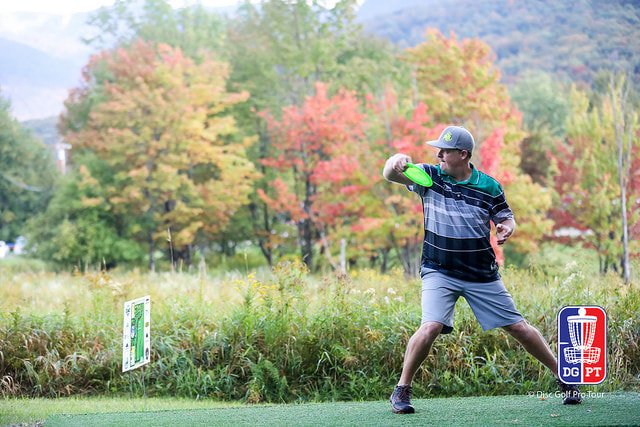 Doss On a Roll: Discraft’s GMC MPO Round 3

If you haven’t check the live scores or you weren’t here today, let me be the first to tell you that you missed a show. Day three of Discraft’s Green Mountain Championship is
in the books and tension was high on the lead card. All four players shot 1055 rated golf or better and Nate Doss stayed on top with his three throw lead intact at a total 35 under par. Michael Johansen, who shot the hot round of the day at 12 under par (1064 rated), is tied for second with Ricky Wysocki, and one throw behind them is Cale Leiviska. Farther down the leaderboard there was still some fantastic disc golf played but no one was able to catch our top four so it will remain the same as we head into the final round tomorrow on Fox Run.
Enough on the numbers, you can get all of those on UDiscLive , let’s catch up with Nate Doss, who has held a wire-to-wire lead for three days now.
ZP: Nate Doss. Day Three. Holding down a three throw lead!
Nate: that’s what the board says. if they’re right. If they’re right – then we’re good.
ZP: Tell me about the round today, fill me in.
Nate: It was a lot like yesterday. Started off, what we would consider maybe a little bit slow, just not getting the birdies. Got hole one, but then went dry on two, three, four, and five actually…for the first eight holes I was kinda swimming on the tees, it wasn’t till the back nine that they dried out I started feeling comfortable again.
When you have a player like Ricky, it doesn’t matter if he’s next to the basket or 50 ft. away. What I did yesterday – he does everyday. you just gotta not give up. Obviously, we can see what can happen. I feel fortunate to be where I am and really looking forward to tomorrow.
ZP: Couple great moments out there, in particular on 15. How’d that feel?
Nate: Yea, that was huge. You know, I was a little bit surprised to see Ricky throw the shot that he did. As much as I wanna say we’re not playing against the other players in our group, we’re playing against the course – I knew that was a moment to put one up by the pin, make that putt, and get that birdie – try to really turn the round around. That’s really where it did for me. I feel like I focused in on that, I wanted to get that birdie, should’ve gotten the previous one – didn’t throw a great drive and made up for that one. Then to finish birdie, birdie, I’m happy with that. the Tap in on 18 just takes a lot of pressure off.
ZP: Looking to the last day of the tournament tomorrow. How are you feeling? what are you thinking?
Nate: I feel great, what I’m thinking is I just need to continue doing what I’m doing. keep the same routine. Come out, get a good warm up, and then get out on the course. I’m not gonna rush anything just let it all come to me. If it’s meant to be it’s meant to be, but I’m not gonna start worrying about things, really ever. I’m just gonna let it play out the way it’s gonna play out. Again, I’m playing against the two time defending world champion. And as much as I want to say I’m better than him, recently he’s been the better player. Just gonna have to go out there and take it to him and really take it to the course, get the birdies when I can get ’em and avoid making mistakes that would maybe make it easier on him.
Congratulations on another great round Nate, and as with every day this week a pleasure to catch up with you and hear your take on the round. So there you have it folks, thanks for reading and make sure to check back tomorrow to see who can pull it together and clench the victory. Our chase card is currently five throws off the lead card so it is unlikely that we will see anyone make a run from there. You can expect to see a leader emerge from our top card, but it is still entirely within reach for all four of them. Will Nate Doss seal the deal four days in a row, or can Ricky, Michael, or Cale catch him? It’s sure to be a show so don’t miss our live coverage starting at 2:30PM EST.