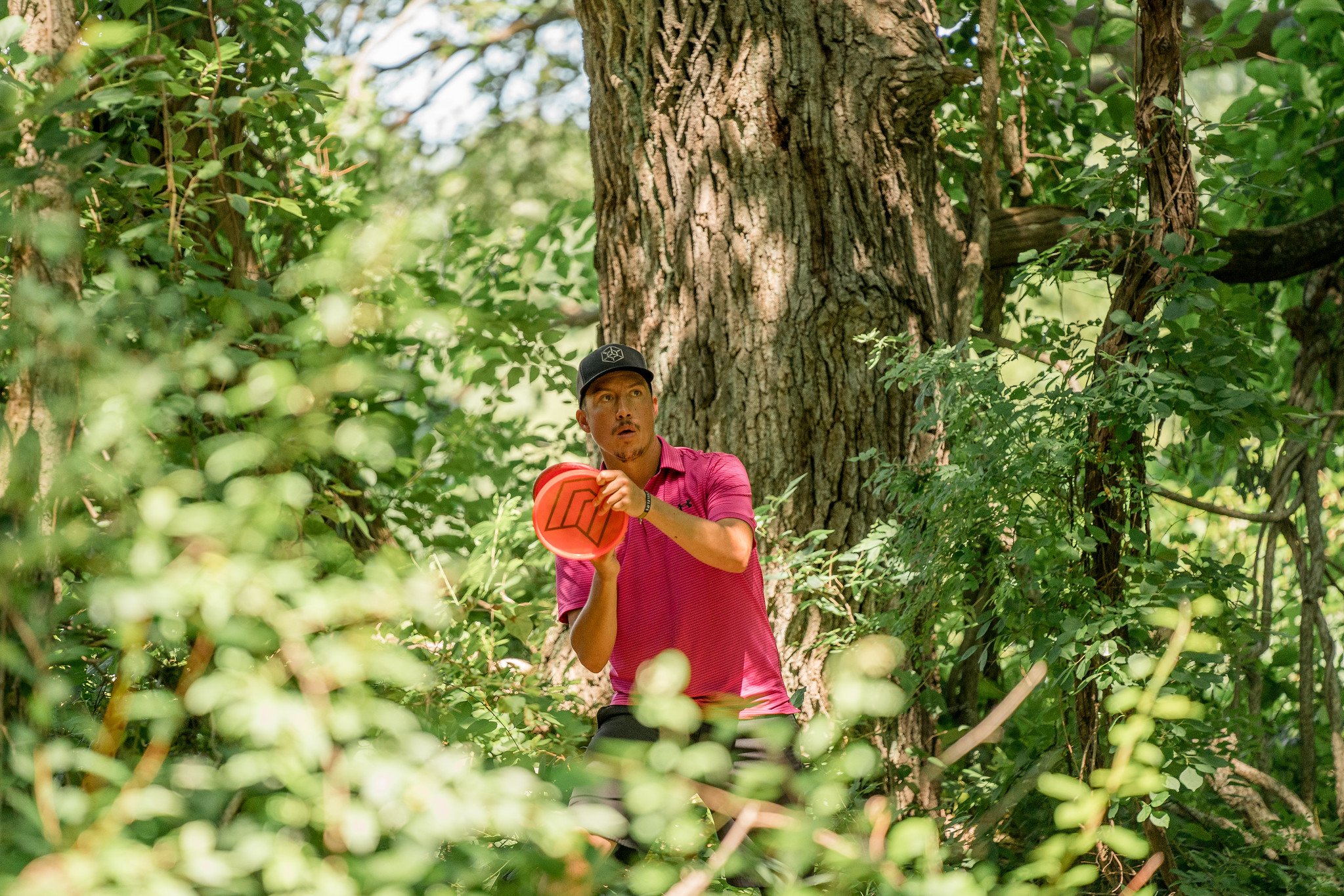 By Seth FendleyAugust 14, 2020No Comments

The first round of Discraft’s Ledgestone Insurance Open presented by GripEq is in the books, and to say this week will be a grind for the players would be an understatement. On the FPO side, over one-third of the field is within three strokes of the lead. On the MPO side, players dealt with back-ups and challenging holes, which resulted in a five-hour average round time yesterday.

There is currently a two-way tie for first at three-under-par between Catrina Allen and Vanessa Van Dyken. Sunset Hills, the FPO division’s course is a scorable course, with the course record rounds set at last year’s Worlds by Catrina Allen and Paige Pierce, both at nine-under-par.

With fifteen players within three strokes of each other, it is still anyone’s event to win.

Van Dyken showed there are plenty of birdies to be had at Sunset Hills, carding eight of them during her round. However, a triple-bogey on the 246ft water ridden hole set her back from the blazing pace she was setting.

Catrina Allen’s highlight of the day came on hole six, where she was able to get up and down for the eagle three. Consistent golf with only two bogeys is what helped elevate her to a tie for the lead.

Rounding out the second round lead card will be Paige Pierce and Ellen Widboom.

Pierce had to fight her way back from a double-bogey on hole three to finish the day two-under-par, one off the lead. Widboom played consistent golf, managing the course with her only bogey on the challenging 525ft hole seventeen. Both players are tied with Callie McMorran and Valerie Mandujano for a share of third.

It is a close race in the FPO division. You can catch all of the action starting at 9:50 AM ET on the Disc Golf Network.

The MPO division started the tournament at the wooded Northwoods course. Playing the Northwoods Gold layout, players struggled to keep their discs in the fairways, which resulted in back-ups across the course.

The wait times played a factor in players’ performances yesterday, but a few players were able to rise to the occasion and come out with commanding first round scores.

The pace was set early by Discraft’s Tim Barham. Barham entered the clubhouse with a six-under-par after starting his round with back-to-back bogeys. His early morning lead would dwindle, though, and he will be on Central Coast Disc Golf’s chase card coverage for round two.

Next into the clubhouse was Kevin Jones. Jones ended up with the hot round of the day at ten-under-par. Jones remarked that while his score was good, “the big dogs still haven’t played,” so he would be interested to see if his score stuck. With only one bogey on the day, Jones played pretty clean golf to give himself a one-throw lead over the field. You can see how he did it on Gatekeeper Media’s first-round feature card coverage of the event.

Following-up Jones was 2018 World Champion Gregg Barsby. Barsby played bogey-free golf to move within one stroke of the lead.

Tied with Barsby is Discraft’s, Paul Ulibarri. Ulibarri also played bogey-free golf yesterday and had at least three holes where birdie was in the cards, but the putt didn’t land. After his round, Ulibarri commented that he felt like he had played his first great round of the season. Between his pinpoint drives and on-point putting Ulibarri is looking strong going into the next three rounds of the event.

Rounding out the round two lead card is James Conrad. Conrad shared a card with Ulibarri in round one, and they were able to push each other to their strong finishes. Conrad struggled on the difficult hole twelve, ultimately finishing with a double-bogey seven. His only blemish on the day, Conrad would proceed to birdie the rest of the holes to move into his eight-under-par finish. Conrad’s highlight of the day was his throw-in for birdie on hole fifteen. You can catch all of Ulibarri and Conrad’s round on JomezPro’s first round feature card coverage of the event.

Live action begins at 4:10 PM ET for the MPO division on the Disc Golf Network. Make plans to tune in and watch!