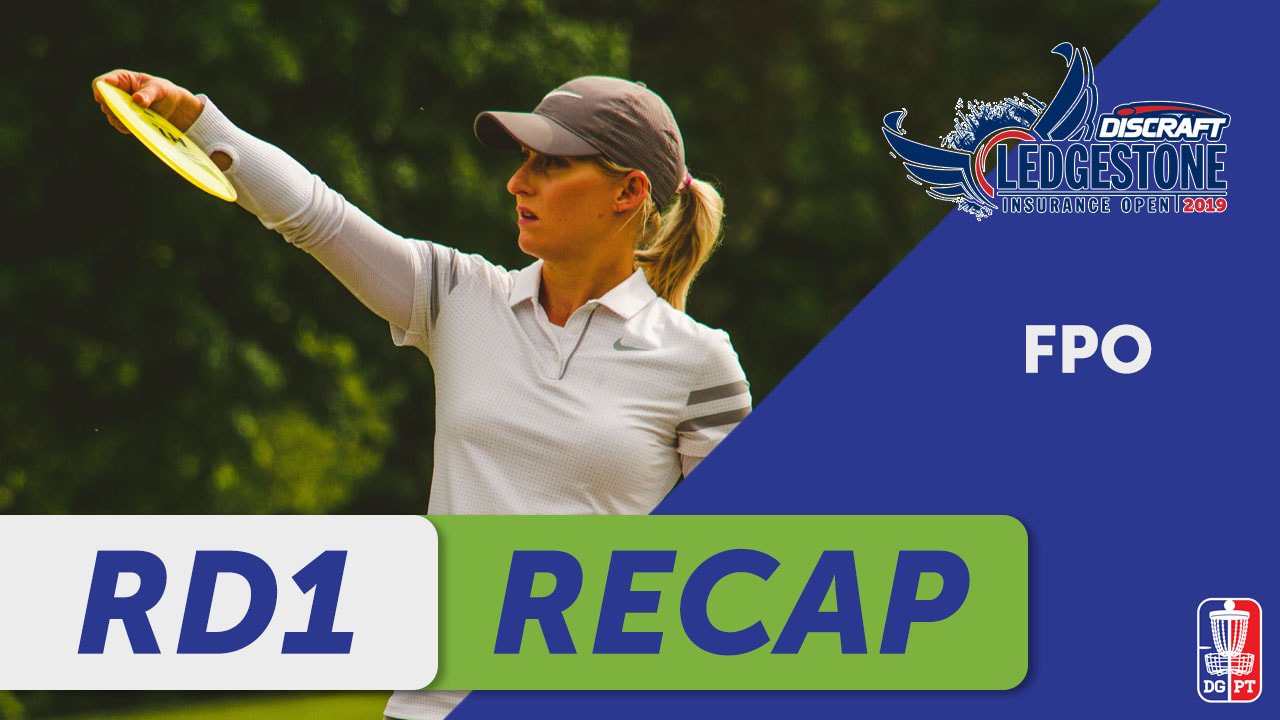 Photo: Lauren Lakeberg, LEL Photogrpahy
​Round one of Discraft’s Ledgestone Insurance Open is in the books for the FPO division. The women were able to narrowly avoid the rain and enjoy cool weather for excellent scoring conditions.

Hailey King came out of the gate five down through six. A double-bogey on hole eight would slow down Hailey’s pace as she went OB on her second throw across the water. She nearly landed a throw-in from the other side of the water but sneaked just past the chains and missed the comeback putt to save bogey. A second double-bogey on hole 17 resulted in Hailey dropping out of a chance to be on the lead card going into round two.

Most of the hot scoring occurred on Hailey’s card and took place in the continuing battle between tour stalwarts Paige Pierce and Catrina Allen. Paige Pierce has historically not performed well at Ledgestone but is looking to right the previous issues with a revitalized focus and looking towards a potential World title here in a few months. Paige finished the day -5 only one throw off the pace. Going into today, Paige said “I didn’t have much of a gameplan, this was my first round on the course. It hadn’t changed much, so I used today as a way to set my gameplan.” When asked about her gameplan for tomorrow Paige continued, “I had two bad releases on holes four and six; otherwise I felt good about my drives. It’s the putting that I need to clean up. The only real change was hole 8, and it was a good change, but it didn’t really change how I approached the course today, and I think if I clean up my putting tomorrow things will be good.”

Today’s hot round came from the second feature card which was filmed by GK Productions. Catrina Allen went into the day leading the Pro Tour standings, and she showed the field why she is a dominant force on tour this season. She had a five-hole birdie streak on holes four through eight which helped her gain and pass Hailey King for the lead before going to the back nine. The back nine presents several scoring opportunities, but Catrina was not able to connect with as many as she had hoped to have. When asked about today’s round, she said, “I would like more birdies, I was consistent, I just had one bogey.” Every other player on tomorrow’s lead card had at least four birdies on the back nine and Catrina was only able to come up with two. When pressed on her key to success, Catrina said, “I thought today was going to be really tough weather, so I focused on being mentally strong.” In true disc golf fashion, the weather held off until about twenty minutes after the women finished their round. All FPO players made it off the course before more than a drop of rain fell, and by twenty minutes after the round, the bottom fell out, and all of the other players at the Sunset course were in the clubhouse due to a lightning delay. Going into tomorrow’s round, Catrina is focused on sticking to her game plan she plans to, “Just play golf, give myself opportunities. “On holes four and five, I don’t bring the OB into play; I’m playing smart to give myself putts on the opposite side of the green.”

Besides Catrina and Paige, Jennifer Allen came into the clubhouse early with a leading -3. Jennifer had a colorful card, carding the same amount of pars as bogeys while also landing the most amount of birdies in the field. All but one of Jennifer’s bogeys came as a result of OBs. When asked about how many of them she was going to clean up tomorrow, she said, “a lot of them.”  If Jennifer can keep it inside the ropes tomorrow, she will have an opportunity to hone in on the lead being only three throws back of Catrina.

Rounding out tomorrow’s lead card will be tour newcomer Callie McMorran. Callie chose to tour full time this season and her hard work is starting to pay off. Callie made her way into the top ten in tour points after San Francisco and consequently dropped out of the top ten after Portland. Callie’s showing today is showing that her Portland finish may be a fluke. Birdying four of the last six Callie said “15, the elevated basket is easier for me to get, the other ones were just placement shots really. We had three practice rounds yesterday, Jenn, Hailey King, Cynthia, and I.” Her only two bogeys came on holes eight and eleven, both of which were the result of OB strokes. She will look to clean up her play tomorrow and could make a push for the lead.

With perfect scoring conditions, the women put on quite a show today. Make sure you are ready to watch round two live tomorrow starting at 10:30 AM ET . The live card will feature Catrina Allen, Paige Pierce, Callie McMorran, and Jennifer Allen.