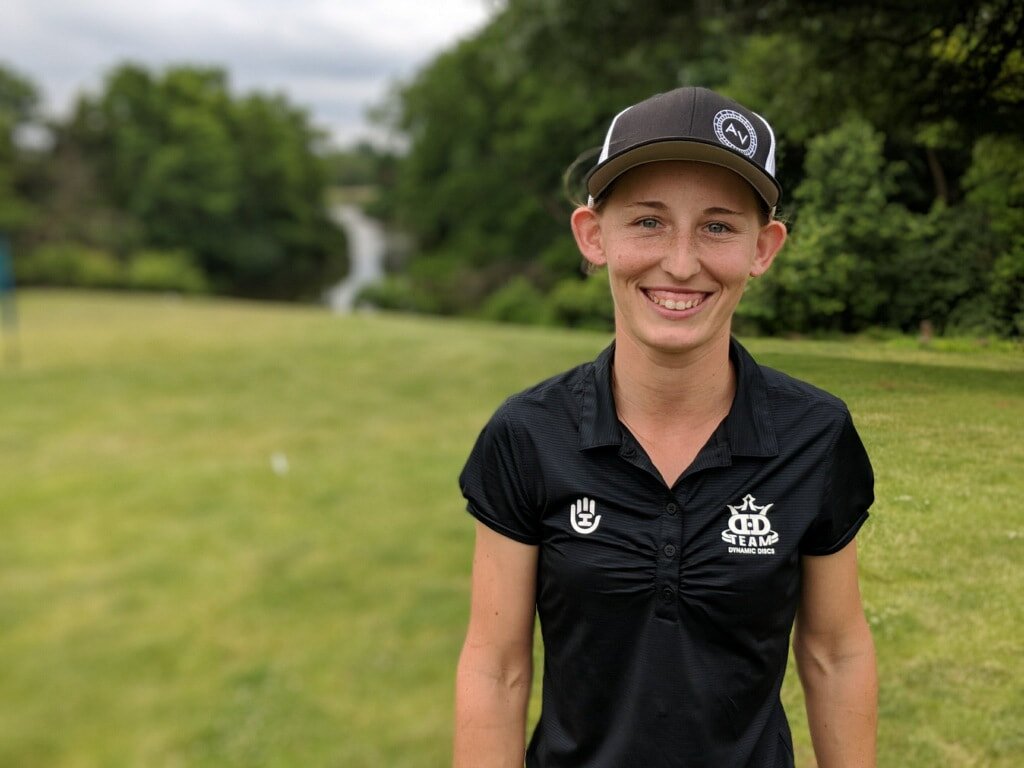 ​Discraft’s Ledgestone Insurance Open is in the books for the FPO division. The players were able to avoid the impending weather once again. The lead card provided a tried and true battle between the best in the game: Catrina Allen and Paige Pierce.

Catrina entered the day with a two throw lead over Paige Pierce. Catrina was able to maintain her lead until hole 11. Starting the day Paige and Catrina went shot-for-shot through three. On hole four, Catrina extended her lead to three but it was short-lived. On the 246ft island hole five, Catrina went OB on the drive while Paige placed her drive inside circle one for the birdie. This two-throw swing brought Paige within one and Paige was able to tie Catrina on hole six. Catrina again went OB on the drive but was able to recover and save par. On hole seven, Catrina parked her drive while Paige had a rare misfire and the battle was on. Catrina would birdie the next three while Paige only grabbed one birdie putting her one throw back going into the difficult hole 11. Catrina landed inside C2 on her drive, and Paige followed her but ended up just inside C1. Catrina was unable to convert, giving Paige the green light to tie. Catrina missed her C1 putt which resulted in Paige regaining the lead for the second time today. Paige was able to maintain the lead for two holes, gaining another throw on Catrina on hole thirteen. However, Catrina was not done, after watching Paige go OB on the drive on hole fourteen Catrina was able to capitalize and grab a birdie to get back to a tie. Two holes later and Paige had fought back to the lead. After both taking pars on 17, Catrina would need to grab a birdie, and she placed her drive just outside C2. Paige’s drive was right beside Catrina, and she converted on her birdie to seal win. After the round, we asked Paige if she had planned to run the putt and she replied, “I’ll never tell.” while laughing. Looking to Worlds, Paige had the following to say, “I don’t think worlds will be won on this course. Worlds will be won at Northwoods. You can tell they went to work at that course. We have been going there after our round each day to practice for Worlds.” At the end of the day, Paige was happy to see a big gallery and wanted to encourage others to continue showing support for the FPO coverage. “This was one of the biggest galleries we had all year. It makes it that much more exciting to play and hear some much eruption and applause from the crowd. Thank you so much for watching. If we want to keep watching these videos, we all need to be positive… go share it, say how much you like it, and let’s keep growing this thing.”

Elsewhere in the field, Jennifer Allen was able to move up one spot with a -5 under par showing on the lead card. Jennifer’s third-place finish is her best finish on tour this season. Lisa Fajkus moved up five spots today with a -6 to finish in a tie for fifth place which was her second-best finish of the season on the Pro Tour only to Portland. Emily Beach from Cedar Rapids, Iowa was also able to move up eight spots into a better cashing position today with an -4 round to tie for 11th. Rounding out our top movers today was Rebecca Cox who was able to move up seven spots to 15th and into the cash.

The next stop on the Disc Golf Pro Tour is Discraft’s Great Lakes Open July 6th-8th. Make plans to tune in and watch!