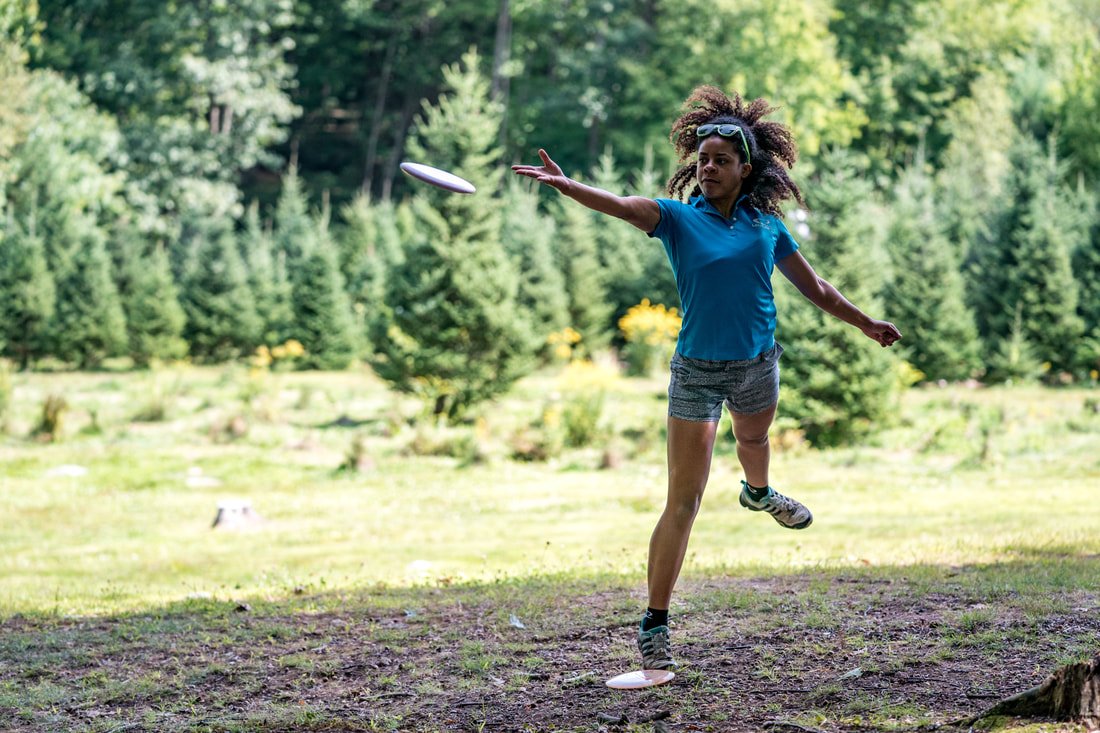 There is a tie at the top of the leaderboard after round one of Discraft’s Green Mountain Championship presented by GripEq. The event, which takes place in conjunction with Smugg’s Fall Festival presented by Fiddlehead Brewing is now underway with the first round behind us. Sarah Hokom and Rebecca Cox are leading.

Rebecca Cox jumped out to an early lead after a string of five birdies from holes seven through eleven. Rebecca was leading the tournament at -3 until she carded a bogey on hole 18 to finish the round. Rebecca used a 71% Scramble rate and 82% C1x putting to help elevate her into the lead. She was unable to convert on six C2 putts which could end up being the difference tomorrow on the Fox Run course.

Tied for the lead with Rebecca is Sarah Hokom. Sarah took a more straightforward approach to the day, avoiding bogey on all but one hole and grabbing three birdies in the process. Sarah’s patience in the woods led to an 89% Scramble Rate, and her ability to convert on two putts from C2 helped to keep her in the hunt. Sarah’s not a stranger to the lead card at GMC. In 2017 she had the lead throughout the final round and ultimately lost to a surging Paige Pierce from the chase card. Sarah will look to maintain her spot at the top on the open Fox Run course tomorrow before coming back to try to build her lead on Brewster’s Ridge on Saturday.

Rounding out the lead card tomorrow will be Jessica Weese and Kristin Tattar. Jessica Weese was in the hunt for most of the front nine, carding birdies to offset bogeys on holes four and seven. On the back nine, Weese ran into trouble carding a double bogey on hole fifteen after going OB on her drive. Weese was able to pick up a birdie on hole seventeen to finish the round at even par, two throws behind first, and in sole possession of third place.

Kristin Tattar finished the day tied at two-over with Hailey King. Kristin makes her way onto the lead card tomorrow due to a lower PDGA number. Kristin’s three double bogeys on holes one, eleven, and sixteen are what contributed to her fourth-place tie. We know that Kristin can be a top contender so expect to see her clean up those throws tomorrow and across the tournament. Hailey King struggled to find a consistent pace today. She carded five birdies but offset those with five bogeys and a double-bogey which ultimately kept her from making the lead card tomorrow.

What may be more notable is that Paige Pierce and Catrina Allen finished the day in a tie for 10th place. At six over par, they are eight throws back from the lead and six away from the top three. Historically both players have played better on the Fox Run course (outside of Pierce’s stellar comeback round in 2017 on Brewster Ridge). Look for both of them to make their way up the leaderboard tomorrow.

Today’s featured card was filmed by GK Pro and will be released on a next-week schedule. Tomorrow’s lead card will be live on the DGPT YouTube channel at 9 AM ET. Tune in to watch Rebecca Cox, Sarah Hokom, Jessica Weese, and Kristin Tattar take on the long and rolling fairways of the Fox Run course.