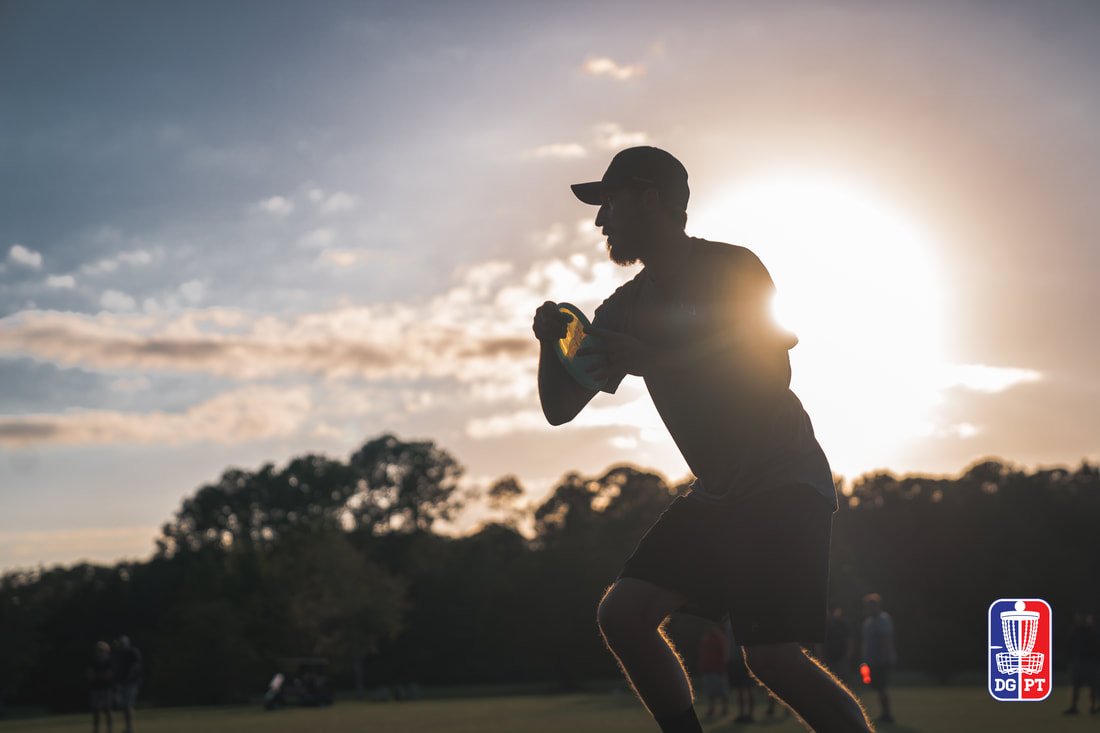 ​Day one of Discraft’s Green Mountain Championship presented by GripEq is in the books and the leader in the clubhouse has two throws on the field. As the players take a break from the action to enjoy Smuggs Fall Fest presented by Fiddlehead Brewing, we take a look back at today’s competition.

The current leader of the GMC after round one is defending Tour Champion, Chris Dickerson. Dickerson holds the lead after being a late addition to the tournament, only making the trip in hopes of playing well enough to be in the Tour Championship in October.  Dickerson bookended his round today with a string of six birdies to start and seven birdies to end. He did not have a flawless round. He carded back-to-back bogeys on holes seven and eight. Dickerson leads the tournament in parked percentage as well as C1 and C2 in regulation. If he can continue leading those stats on the longer, more open Fox Run course tomorrow, he will be in prime position to maintain his lead.

In a cluster tie for second place and on the lead card tomorrow will be Paul McBeth, Zach Melton, and Nate Perkins. With all three players at two throws back from Dickerson and only one throw ahead of three other players there is not much wiggle room at the top. McBeth was the only player of the three to avoid carding a bogey today, carding impressive 100% scramble and C1x putting rates. One place where McBeth faltered today was from C2, where he failed to make a connection. If McBeth can turn on the C2 putting tomorrow look for him to maintain his second-place standing or usurp Dickerson in score. While Melton and Perkins both carded more birdies than McBeth today, they will be looking to clean up bogeys which were reached in different ways. Melton’s came on a two-putt after putting his drive inside C2 and Perkins came after missing a scramble opportunity to connect for par from C2.  Both players connected with just over 20% of their C2 putts and Perkins carried through a 100% C1x putting rate to put themselves on the lead card going into day two.

Not far behind the tie for second is a three-way tie for 5th place between Simon Lizotte, Nate Sexton, and Martin Hendel. Sexton is fresh off the heels of a repeat victory at Canadian Nationals where Simon Lizotte finished in 4th place, and Martin snagged a T13 finish. Sexton played the day much like his former teammate, and tour partner Paul McBeth did, bogey-free. Sexton did miss one putt inside C1 but made up for it by connecting on 1 of 3 of his C2 putts. Simon and Martin both faltered on one hole today. Simon’s came when he got into trouble after his drive on hole fifteen, and for Martin, it was an errant drive on hole eight which led to his bogey. All three players will join the 2018 World Champion Gregg Barsby on the chase card which will be filmed by Gatekeeper Media.

It’s a tight race at the moment with most of the field hoping for some scoring separation as play moves over to Fox Run. Barsby is in a six-way tie for eighth place with the likes of Orum, Castro, Clemons, Hannum, and Freeman. Moving down the list is an even bigger tie at 14th at -6 with Brinster, Koling, Isaacs, Earhart, Gibson, Barham, Hammes, and Carey. While it is a tight race, there are a few notable players who are not close to the top. Seppo Paju and Ricky Wysocki who are both currently ten back of the lead at one-under-par and Calvin Heimburg is eleven back of the lead at even par.

Make plans to tune in and watch the action live tomorrow at 2:30 PM ET on the DGPT YouTube Channel. You can also catch next-day coverage from Jomez Pro , and Gatekeeper Media of Discraft’s Green Mountain Championship presented by GripEq taking place at Smugg’s Fall Fest presented by Fiddlehead Brewing.