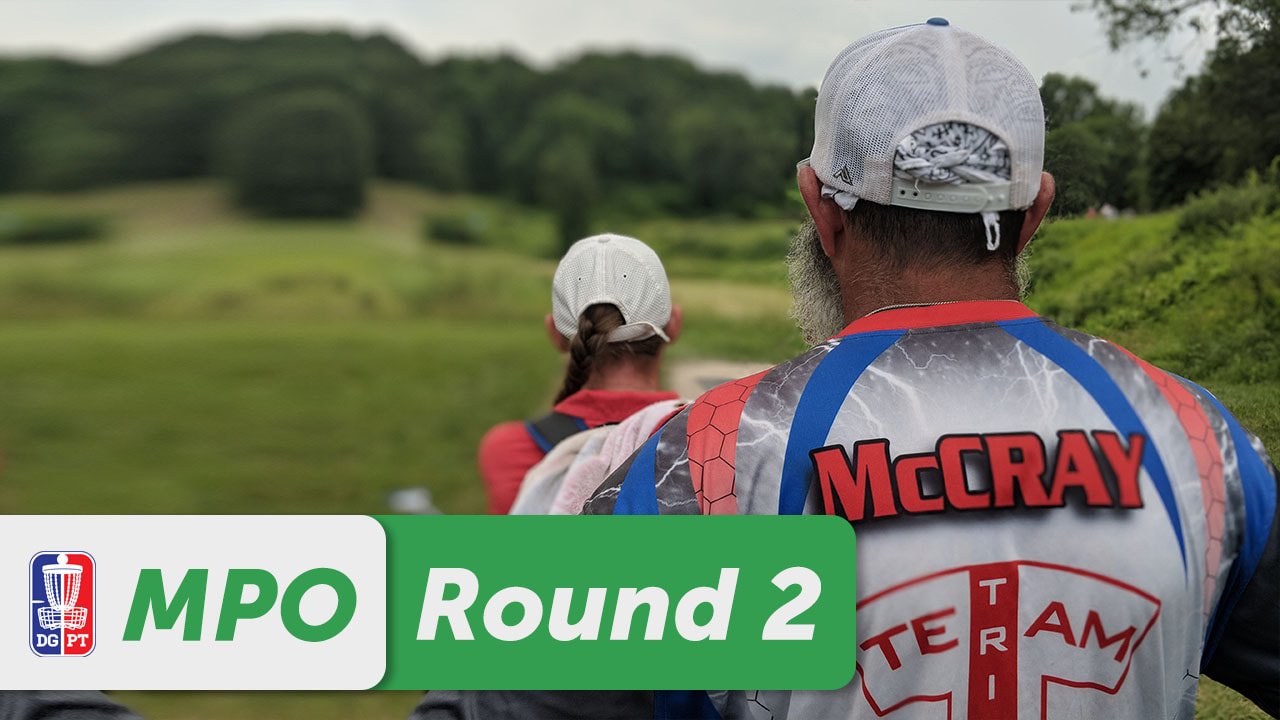 ​Day two, moving day, at the Discraft Great Lakes Open has come to a close. JohnE McCray made some moves. Six birdies in a row pulled him onto the lead card for a brief moment before later playing player surpassed his total while he watched from the clubhouse. His 11 down, the hot round of the day, ended up moving him up 29 spots. His putter was on fire — three out of four from Circle 2. 100% in C1X. Moving day, indeed.

The lead card battle was a sight to behold as Paul McBeth carded seven birdies on the first nine holes which were reminiscent of his record-setting 18 down 2nd round from 2018. Overtaking everyone on the lead card, and earning himself a one-stroke lead going into the back nine, we could not help but wonder if anything could stop him. A couple of weeks ago at Ledgestone, McBeth birdied the last ten holes to win the tournament going away. That was not to happen at DGLO. At least not in round 2.

Kevin Jones, after missing a couple of opportunities to close, put the putter to the metal and birdied six of the last eight holes. Asked about the beginning of his round, Kevin responded, “I noticed McBeth was on fire, but the putter was actually working okay. I missed two or three C1 putts, but I answered them quickly and was able to come back from there.” He left himself a total of two C2 putts, hitting one. His C1X putting was suspect, but when you give yourself enough opportunities, eventually you break through. Asked about how he feels going into tomorrow Kevin said, “I feel really good about my odds. If I do this again, it is going to be hard to catch me. I am going to go out there and stack up the birdies.” Kevin took advantage of an uncharacteristic string of pars by McBeth to build a two-stroke lead coming into the final hole. Both players drove into Circle 2, and we were ready for these two Goliath’s to set the stage. McBeth drained his 50 footer to put the pressure on Jones. Kevin missed, and the lead was down to one with one round to go. Last year Kevin Jones went into the final round of Idlewild with a lead.

Comparing tomorrow to day three of Idlewild last year Kevin had the following to say, “I feel like I am where I belong. I feel comfortable being on the top card because I belong there. Last year I may have rushed the moment, this year I am concentrating on playing my game. To close we honed in on the comment “rush the moment” and Kevin provided the following insight, “Any pro disc golfer knows what I mean. Whenever we are in a pressure situation, we need to think about the task at hand, not the pressure. When we feel the pressure, we want to rush the moment. We think about the pressure while we go through our routine and then when our routine is complete, we are not ready to throw. I’m much better at this now. Not perfect, but much better.”

The stage is set.

Zach Melton and Anthony Barela join them on the lead card and sit four and five back respectively. This is going to be a thrilling final round! Make plans to tune in tomorrow at 3 PM ET to watch the final round of the Discraft Great Lakes Open.