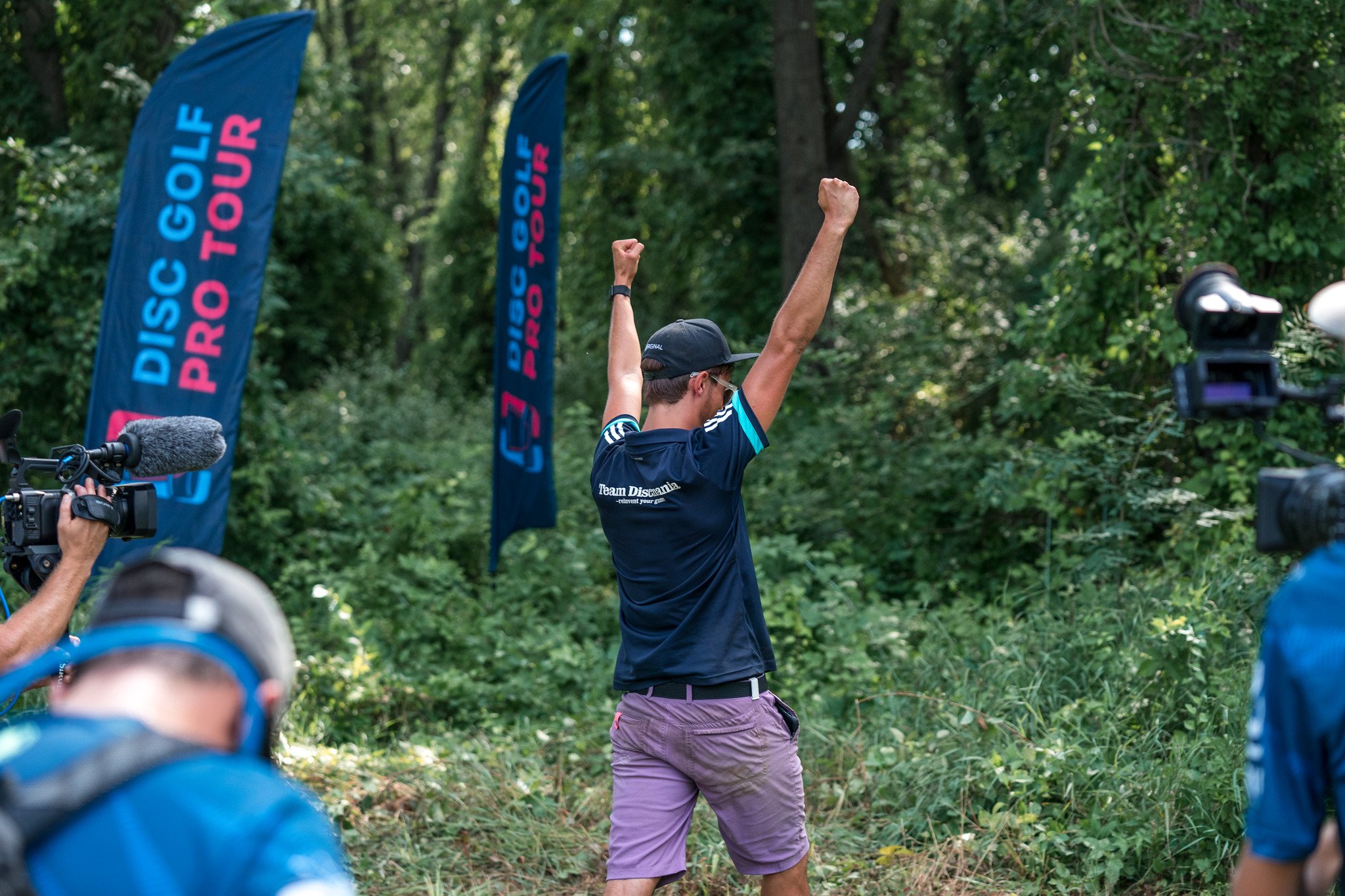 Discraft’s Great Lakes Open is in the books, and the perfect round was not achieved. That does not mean that the final round was boring by any stretch. In fact, in the MPO division, the event came down to the last putt.

Going into the round, Kevin Jones and Eagle McMahon were tied for the lead. The historic top finisher in Jones and the first-time in Michigan playing McMahon. Not to be counted out, players behind Jones and McMahon all the way down the chase card were all within four strokes.

Players in the mix beyond Jones and McMahon were Chris Dickerson and Ricky Wysocki. The only player not on the lead card out of the four was Chris Dickerson. Starting the round three strokes back from the lead, Dickerson was in a great position to move up the leaderboard from the chase card.

Tieing for the hot round of the weekend helped Dickerson move up five spots on the leaderboard. With thirteen birdies and no bogeys, Dickerson went on a heater after hole eleven birdieing every hole to the finish from 12 to 18. With 50% C2 putting, Dickerson had a shot at three more birdies that would have put him at an impressive -16. However, he was left with a -32 for the weekend, watching as the lead card came up hole 18 to see if he would record his first Pro Tour victory outside of the Tour Championship.

On the lead card, Ricky Wysocki came out on a heater, landing birdies on the first four holes. This would put him and Kevin Jones ahead of McMahon going into hole five. Wysocki would cool off through the mid-point of the course, right as McMahon turned up the heat. Jones would maintain his lead until hole nine, where the wheels began to fall off. Jones carded a par while the rest of the lead group secured birdie. He lost another stroke with a bogey on hole eleven. It took Jones until hole fourteen before he would get his feet under him to make a push back towards the lead. By hole sixteen, he was back tied with McMahon. Jones was unable to convert birdies on holes seventeen and eighteen, which dropped him down to a fourth-place finish.

Wysocki took advantage on the final two holes securing birdies and moving one place ahead of Jones. McMahon secured the birdie on hole seventeen to put himself into a tie with Chris Dickerson. On hole 18, he knew out of his hands that his drive was where it needed to be for a birdie. From just outside circle one, McMahon stepped up and secured the victory. Without a crowd, McMahon did not know he had won until all the cameras turned to him for the reaction.

Going into the final round, Paige Pierce had a four throw lead over the field. Given her dominance across the season, it would take a significant blunder or uncharacteristic rise from a competitor for her to lose.

One name we do not hear often making a push was Ellen Widboom. Widboom finished one throw off Pierce’s pace on day two and looked to do the same in the final round. However, Widboom’s first-round struggles would not be enough to surmount as there was a seven throw difference between her in third and Pierce at the top. That being said, Widboom shot the hot round, which was enough to move her up to a second-place finish.

Rounding out the podium were two players who started the day on the chase card. Jessica Weese and Sarah Hokom had both previously played very well at Discraft’s Great Lakes Open. In 2018 Hokom won the event, and Weese has never finished outside the top five at the event. Both players were able to shoot three-under-par for the day, which was enough for them to leapfrog two other players on the lead card to share the bottom podium finish.

If it’s not clear enough already, Paige Pierce secured her fourth Pro Tour victory of the 2020 season this weekend. Her only event to not win was the Waco Annual Charity Open, where she did not even cash. The last time this had happened for Pierce was the 2013 Hall of Fame Classic. Even with one poor finish, Pierce sits high on the Pro Tour Standings over 100 points ahead of Catrina Allen, who is in second.

The action continues next weekend with the Mid-America Open, a DGPT Silver Series event. You can catch MPO and FPO post-produced coverage on GK Pro’s YouTube channel. Elite Series play resumes the next weekend (August 7-9) at the Idlewild Open presented by The Nati Disc Golf and Dynamic Discs. Make plans to tune in and watch!