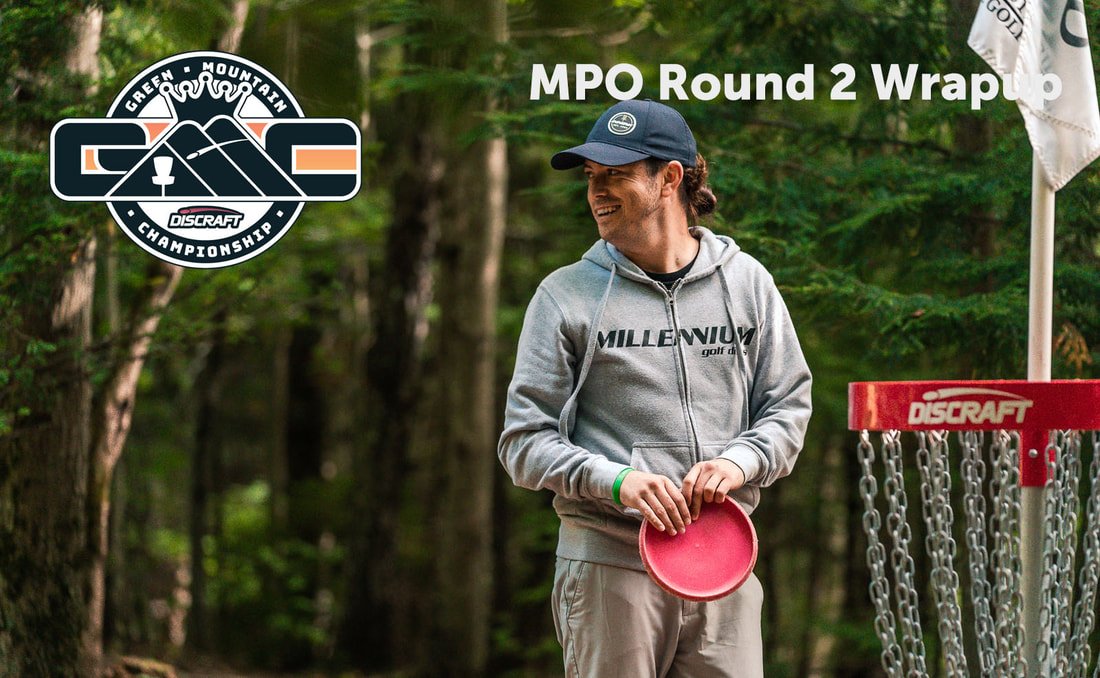 GMC is Chris Dickerson’s fourth Pro Tour event of the season. He needs to finish in the top five to qualify for the Tour Championship, which he won last year. He is a man on a mission. He started round 1 with six birdies. After a couple bogeys, he finished the round with seven birdies in a row. The 11 down was enough to put him in first place, two shots ahead of Paul McBeth.

Hole 1, round 2. Chris Dickerson goes OB and follows it up with a three putt. Meanwhile McBeth drains a thirty footer for birdie. One hole in, McBeth has the outright lead and, for the next 16 holes, he would not look back. McBeth birdied five of the first seven holes and opened up a lead. After going OB and carding bogeys on holes 8 and 9, McBeast mode was activated. He started the back nine with five birdies in a row and opened up a five stroke lead on Simon Lizotte, who had moved up to second.

One for the ages is McBeth’s birdie putt on hole 13. He had a wooded right to left hyzer lane to throw through that an e-bike would have had trouble navigating. But McBeth’s putter is not an e-bike and it flew straight through the lane, stalled, and dove left to the basket. Nate Doss exclaimed that it was a Top Five shot of the year. It was not just his putter doing the work. Watching the round, McBeth’s driver was working to start and, as the course tightened up on the back six holes, his putter took over, going 3 for 3 from C2. Again, Nate Doss was almost bored calling for the ZUCA Replays. McBeth said, “Putting has been the solid point for the two rounds.”

Meanwhile, on a few cards ahead, Lizotte birdied 18 to get to 13 down. Chris Dickerson, through the first 14 holes, was even par with a double bogey on the first hole and two birdies. At that point, he was six shots behind McBeth. Dickerson carded the birdie to get to 14 down, sole possession of second. They both watched McBeth, who came into the final hole with a five stroke lead, throw two shots in a row out of bounds. Stunned silence fell over the crowd as McBeth eventually tapped in for a quad bogey seven, losing four strokes to Dickerson and Lizotte, who are now one and two behind respectively.

A visibly irritated McBeth said of hole 18 in the post round interview about his game plan on hole 18, “It was the wrong game plan on hole 18. I tried to lay up. I should have just played aggressive. I need to throw cleaner drives as I made too many mistakes off the tee and hope to do a little better than a nine (down).”

Looking down the leaderboard, Simon Lizotte has put together two solid workman rounds. He hit one C2 putt and missed one C1X putt. He finds himself in a good position and has moved up to the lead card for Round 3. Simon told Madison Walker, “It was a good round, birdied the first six right out of the gate. I fell into trying to lay up playing too safe. I hung in there and finished at five down. All in all, it felt good. Out in the open on holes 16, 17 and 18 the wind.”

When asked about playing too safe on a few holes, he quickly replied, “Never lay up. That’s a life lesson. Laying up and going OB is the worst feeling ever.” When asked about Brewster Ridge for Round 3 tomorrow, “If I can shoot another 8 down like I did in Round 1 I think I will be pretty happy with that.”

Ricky Wysocki made the biggest move today carding the hottest round of the day. He birdied nine of the first twelve holes and finished at nine down for the round. Interestingly, he missed three C1X putts and bogeyed hole 16 so he did leave a little out there. The amazing round allowed him to move up over 40 spots. He will be on the chase card in Round 3 and is ready to attack Brewster and get back on the lead card.

Gregg Barsby, who won the World Championships here one year ago, made a charge until hole 16, where he carded a quad bogey. With a par on that hole he would be in second place. If there is anyone that can bounce back from a devastating hole, it is Barsby. In fact, he followed it up with solid birdies on 17 and 18. He sits in a tie for ninth place. Look for him to move up the leaderboard.

Alex Russell and Nikko Locastro went five down in round 1 and six down in round 2. They find themselves in a multiplayer tie for fourth. When asked about his day, Nikko said, “I’m feeling very good about my game. As far as the round goes, there were a few holes where I misjudged distances. Going into tomorrow I will make adjustments from the first round. I love being in Vermont. I feel confident and good about my game. I’ll try to execute for the next two rounds. I’m excited to play better than I did the first round and move up the leaderboard.” Nikko is playing hot and went 7 for 8 in C2 and 100% in C1X. That is letting the putter do the work.

Alex Russell is also feeling good in Vermont and said, “I feel great. Kept it much cleaner than I expected. I got the first three to get a hot start and finished at six.” When asked about the course, “The courses are pretty even in my book. They are attackable but with the breeze today, I played many holes for pars and wanted to just keep clicking along.”

Nate Sexton, Tim Barham and Chris Clemons also sit at -11 and are part of the tie for fourth. Sexton struggled, carding three bogeys and a double bogey, as well only hitting 67% in C1X. He finished birdie birdie on 17 and 18 to pull his round back to a respectable three under and find himself on the chase card. Tim Barham was the epitome of controlled golf, playing bogey free until the final hole. Chris Clemons was in between them both, starting hot with birdies on five of the first six holes and following it up with a double bogey on seven. He was 100% in C1X and will be looking to get onto the lead card.

The third round of Discraft’s Green Mountain Championship presented by Grip EQ goes live Saturday at 3:00 Eastern. This could be one for the ages with McBeth, Dickerson, Lizotte and Locastro on the lead card.