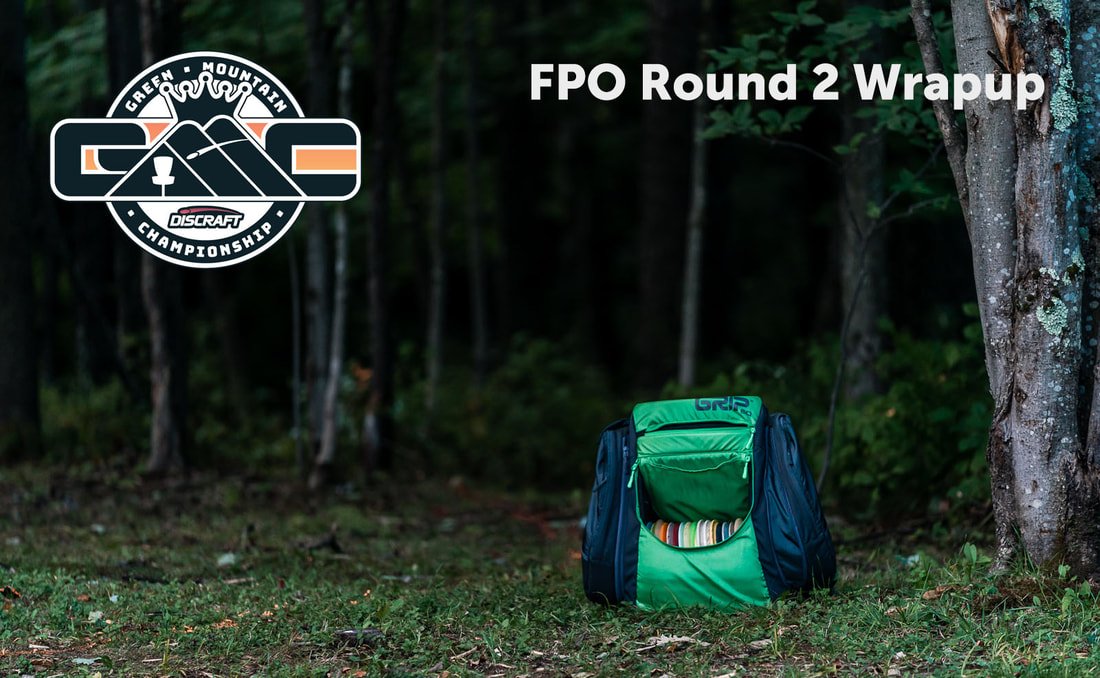 While preparing for the second round of the Discraft’s Green Mountain Championship presented by Grip EQ, Sarah Hokom’s partner and caddy suffered a seizure. A friend drove him to the hospital and Sarah hokom was left to try and regain her focus. Sarah explained her actions before the round started, “Deep breathing, trying to relax, compartmentalizing and support from my card mates is how I got through it.”

And get through it she did. With temperatures in the low 50s and the wind gusting to 15 mph, it was a cold and windy day and the OB laden Fox Run course stood in front of the players. Sarah explains her strategy, “I was trying to play the easiest possible shot. I was going for par, wanting to avoid the OB as much as possible. For example, on hole 17 I know I can get a good drive to give myself a circle 2 look. But I felt more comfortable doing a couple chop hyzers and making sure I got the par and not bringing OB into play.”

After carding the par on hole seven, Sarah Hokom was two under par. Hailey King was the only other player under par. The cold and the wind did a number on the FPO field, especially on Hole 7, the first ultra long and open hole on the Fox Run course. Over 70% of the players went OB at least once and many went OB multiple times. Hokom’s game plan of playing in control and only taking what the course gives you served her well. Through the front nine, she had taken the lead and was in cruise control, leading Jessica Weese and Rebecca Cox by five.

Paige Pierce and Catrina Allen, the #1 and #2 power ranked players, who are always in contention, found themselves ten and eleven strokes out respectively with nine holes left in the second round. Paige had a tough start carding the double on hole 4 as well as a bogey on hole 6. She then turned the page on those scores and carded birdies on holes 7 and 8, the only player to do so. Through the front nine, she found herself ten strokes behind Hokom, but with over two rounds to go, we cannot count her out. Catrina Allen struggled with her C1X putting as well as keeping the disc in bounds. She has the skills to make a run but so far at this event has not shown the fire necessary to do so.

Said Paige, “Pretty tough round out there in the wind so lots of bogeys came. Overall it went all right.” When asked if she had a different mindset on the more open Fox Run course versus yesterday’s round at Brewster Ridge, Paige replied, “I wasn’t hitting my lines yesterday in the woods. It’s tight and if you miss your line in the woods the disc doesn’t continue to fly. At Fox Run, even if you miss your line, you still get the forward progress. I was trying not to think too much about that and just play my tee shots better today.”

And then there was Kristin Tattar. Through 11 holes, she had thrown out of bounds four times and was having serious trouble managing the winds. As they came down the stretch though, Sarah Hokom started to hiccup (bogeys on holes 12 & 13) and Kristin started to play very consistent golf.

On hole 11, Kristin drained a 50-footer to save bogey. From that point on she was ice in the wind, going one under par and gaining three strokes on Sarah to close out the round. At one point, it looked like Sarah and her cautious approach to the round were going to run away with this. Kristin demonstrated that, at the halfway point, this match is anybody’s to win.

Hailey King bogeyed three of the last five holes ending two over par for the round. It was good enough to move her onto the lead card and it shows how good her start was as she birdied two of the first six holes. She ended the day just two shots worse than Sarah Hokom’s hot round.

Rebecca Cox rounds out the lead card. She shot the hot round yesterday and finds herself eight strokes back after carding seven OB strokes and shooting 44% from C1X. She will need to improve both of these numbers to climb back up the leaderboard. There is plenty of golf to play and she has the skills. Only time will tell if she is able to get back on top.

As we closed out the interview, Sarah Hokom jokingly referred to the Nantucket Open, “I think it helped to play in Hurricane Dorian last week.” The Green Mountain Championship is halfway done oh, the competitors have seen both courses, and there is plenty of golf to play. Will Sarah Hokom build on her lead or will she fall back to the crowd for yet another exciting finish at Smuggler’s Notch?

Best wishes to Robin, Sarah Hokom’s partner and caddy on a safe and full recovery.

Make plans to watch Round 3 of Discraft’s Green Mountain Championship presented by Grip EQ tomorrow at 9:30 AM Eastern.