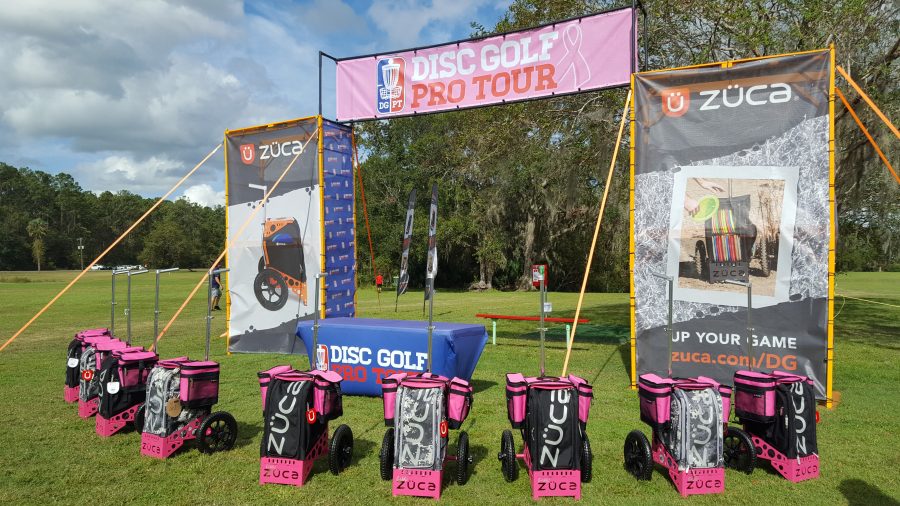 DGPT, ZÜCA, and Throw Pink Raffle for The Jonesboro Open

At the end of the 2018 Disc Golf Pro Tour season the DGPT, ZÜCA , and Throw Pink announced a new initiative that would span from the 2018 Tour Championship across the 2019 season to the 2019 Tour Championship. The goal of the partnership is to raise over $5,000 to support local charities.

Everyone is a winner!

Everyone who purchases a raffle ticket will receive a signed thank you card from the men’s and women’s final day lead card. This week the action is focused on Jonesboro, AR for the Play It Again Sports Jonesboro Open presented by Prodiscus. Who do you think will be on the last card?

In addition to giving away a ZÜCA cart, local Throw Pink representatives will be on-site promoting the organization. Upon selling all of the raffle tickets in Jonesboro a $500 donation will be made to a local charity.

The Disc Golf Pro Tour is thankful for ZÜCA’s donation of carts for this initiative and the local support of Throw Pink at each event along with their guidance on where to donate the money raised. VP of Communication Seth Fendley had the following to say, “During the first raffle at the DGPT Championship, supporters shared their stories of why they were donating. The outpouring of support from the disc golf community shows how much disc golfers care about and support those around them. We look forward to watching the season unfold as support for this initiative grows.”

Jen Apy from ZÜCA added the following quote: “ We admire the fact that disc golfers are incredibly generous and supportive of the communities they play in. ZÜCA is proud to partner with DGPT and Throw Pink to help the disc golf community show their support of a local Arizona organization.”

Individuals wishing to support this initiative have until the five tickets are sold . The winner of the raffle will be chosen during the men’s live broadcast on the final day of the event. Make sure you are tuned in and watching to hear the five lucky raffle ticket supporters who have helped us all win!